Qantas blames the falling Australian dollar for bumping up fuel surcharges on its flights. But there's a complex game of cat and mouse at play with the airlines chasing scarce tourist dollars. 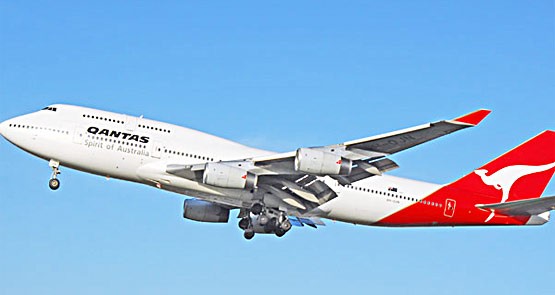 There is much more going on because of the falling value of the Australian dollar than the fuel surcharge increases just announced by Qantas.

The real whammy for Qantas, and its customers, and foreign airlines serving Australia, is the feared deflation of  the outbound boom in Australians flying abroad to enjoy the recent record strength of the AUD compared to the euro, the pound and the US dollar as well as in most of Asia (apart from Japan).

It is too early for any recession in Australian travel abroad to become consistently apparent in the statistics, but when the AUD began to retreat earlier this year, airline and travel industry players were quick to predict that the first effects would be to make fuel costs even more painful than they were. That would be followed by consumers forgoing the temptations of “cheap” overseas holidays.

As the table circulated to travel agents by Qantas shows, the increase in total published fares for international travel are slight, generally around $50 in economy and as much as $150 additional in business class for a return flight to Johannesburg, which is more than for longer flights to the US and London, the only surviving Qantas destination on the kangaroo routes to the UK and Europe. Qantas isn’t threatened by those increases, which amount to a few extra days car parking charges at the major airports. 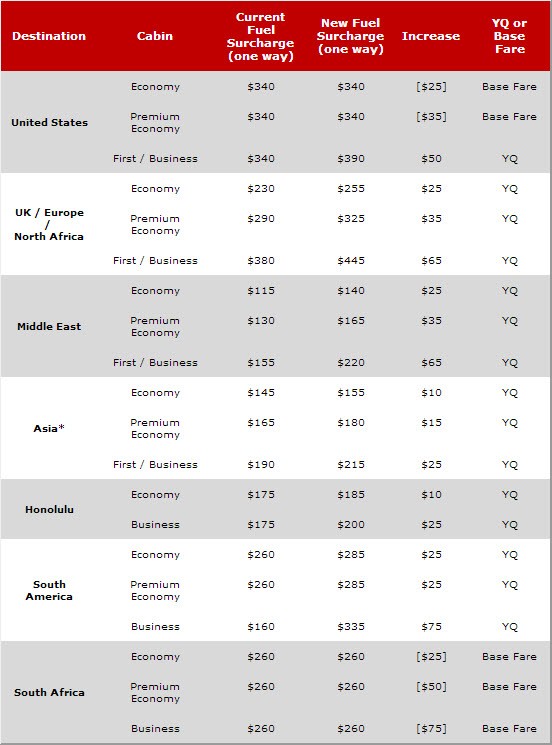 But it is threatened by perceptions that Europe and America are becoming costly again for Australians suddenly getting less foreign spending power for their Australian dollars. Domestic travellers are up for an extra 2-3% in fares depending on route and class in Qantas.

But these are published fares. The reality is that Qantas is locked in fierce price competition both at home and abroad, and that includes in places with its own Jetstar budget brand, which never posts fuel surcharges, putting them where some economists say they should always be put — buried inside “price elasticity”.

The result is that no matter what Qantas, or Virgin Australia, do by way of published fuel surcharge increases, they will unhesitatingly undo in the heat of total fare price competition. They will offer special or sale offers selectively in targeted deals to customers enrolled on databases like loyalty programs or Facebook specials — as well as anyone who visits their booking sites.

When an airline comes out first with a fuel surcharge increase it is also by design or accident sending a signal to competitors that it is hurting and wants to lift fares. How the other airlines will react to this, only time will tell.

If airline V, for example, matches the fuel surcharge rises by airline Q, each may nevertheless try and cut the legs off each other by putting out a new round of discounts if they see a likely benefit greater than the risks involved in more fare fisticuffs.

At this stage the flip side of the weaker Australian dollar, a more competitive inbound tourism industry, is set to disappoint Qantas and everyone else flying international routes. The visitors that cheaper Australian dollars are supposed to attract from Europe, the UK and the US are either broke or frightened.

Despite the fan invasions of the Lions Rugby Tour and Manchester United Not Walking Alone tour, which have seen thousands of  UK supporters in Australian stadiums, the overall markets for cheaper holidays in Australia are in recessions that are impervious to Downunder costing less.

And no one in finance is predicting that the AUD will sink back to the levels that had bands of sunburned lager louts chanting “three dollars to the pound” as they followed cricket tours to Australia earlier this century, before the GFC put them back to counting their pennies to make it as far as Lords from Manchester.

The fuel and currency woes of Qantas do have an upside.

Where can we go on holidays now? How will we get there?

European and North American tourists might not be attracted by the cheaper Aussie Ben but what about Southeast Asian, East Asian and Indian tourists? I know Asians find Australia attractive as a destination because it is so different from all Asian countries.

All too complicated for me. All I know is that usually I can save money by buying a one way fare in Aus to leave the country and another one way fare out of Aus to come back. You can often save over $250 AUD doing this for a trip to NZ for example, compared to the cost of buying a return flight in one hit.