Manning didn’t aid the enemy, but his country will lock him up for life

Former US military officer Bradley Manning has escaped prosecution for aiding the enemy. But the 19 charges that stuck will see the suspected WikiLeaks source locked away for decades. 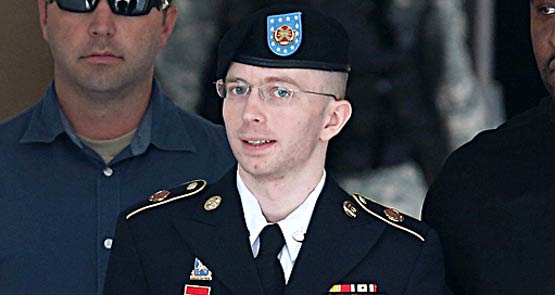 Bradley Manning, the junior intelligence analyst who leaked nearly a million pages of documentation to WikiLeaks, has been found guilty of 19 of 21 charges made against him. Six of these charges were of espionage, which could have warranted the death penalty, had this not been excluded from consideration earlier.

Crucially, however, Manning was found not guilty of “aiding the enemy”, a charge that — had it stuck — would have vastly extended the purview of such accusations, potentially criminalising the very act of publishing classified information.

However, Manning now faces a sentence of up to 130 years and will, at the very least, spend decades in prison. Manning had admitted to many of the charges but denied espionage and aiding the enemy. Nevertheless, the prosecution went in hard on both these accusations, despite the fact there was no suggestion Manning had made contact with enemy states or violent international groups.

The absence of such direct action should by rights have protected him from espionage charges as well. But the espionage laws, dating in their original form, are written and defined so broadly that almost any dissident action involving classified information can be included. The aim of such charges was obvious: to make a dynamic link between Manning and WikiLeaks, in particular so that Julian Assange could be charged with espionage as well.

The suggestion is Manning and Assange had knowingly been in contact — as Manning began saving hundreds of thousands of pages on the Iraq and Afghanistan wars, US diplomatic history and the prisoners of Guantanamo Bay, as well as the devastating “collateral murder” video, and Assange encouraged him to search for specific files. Manning denied the accusations and maintained his contacts with WikiLeaks had been through the anonymous portal of its online chatroom (quite possibly when it was being run by Icelandic volunteer Sigurdur Thordarson, who later became an FBI informant on the group).

The mass release of information on recent wars — and on a history of surveillance and interference in the politics of both allies and enemies alike — fit in well with the approach that had been set out for WikiLeaks by Assange when he had first devised the group in 2006. The idea was that large-scale leaks would change the power relations between governments and a wider society by changing access to information and would send governments into a tailspin as they attempted to plug the leaks. Providing a secure conduit for leakers would encourage others to follow suit.

“He is far from the last man or woman who will be thus tested on these matters, a defining one of our age, in the years to come.”

WikiLeaks’ secure submission system held. But its staff are not skilled intelligence analysts, and Manning — who had leaked much of the material from an arid base in Iraq, while undergoing something of a personal crisis around his identity — told of his actions to Adrian Lamo, a one-time hacker with previous convictions at risk of harsh sentences on any future prosecution. Lamo turned his online chats with Manning over to the authorities, and the rest is history in the making.

Though WikiLeaks’ secure submission system went down after attack and there have been splits and departures from the group, the emboldening effect appears to have continued, with intelligence subcontractor Edward Snowden subsequently releasing a series of documents showing the National Security Agency engaged in mass routine surveillance of US citizens, in concert with major internet companies willing to turn over their data to intelligence organisations. Snowden’s revelations have prompted legislation within US Congress to curtail the powers of the NSA with regard to surveillance, a move that has gained more than 200 votes in the House of Representatives.

The “aiding the enemy” charge directed against Manning was already seen by many as tendentious. And — as WikiLeaks has noted in its press release — it was used in part to make the espionage charges look more palatable when used against not merely whistleblowers but also journalists. Since the espionage statutes are so broadly written, the Manning case potentially criminalises any investigative journalist who has an active working relationship with a whistleblowing source. WikiLeaks’ former partners, The Guardian and The New York Times, reacted with understandable alarm to this expansion of the espionage statute, while US cable networks were slow to extend any coverage to the story at all — as they have been throughout Manning’s three years on remand.

Manning will be sentenced tomorrow. He’s already been subjected to months on end of low-level torture — sleep deprivation, extended solitary confinement — under the guise of suicide prevention. By all reports he has been tempered in the fire and was actively assisting in his own defence. He has a long and hard road to walk in the years to come, his actions arising from the best and most universal human drive: towards truth and moral witnessing; his life undone by other, no less human needs: for love and connection.

He is far from the last man or woman who will be thus tested on these matters, a defining one of our age, in the years to come.

The verdict gives a new interpretation and twist to Superman’s motto ie: truth, justice and the American way.

Fancy, someone thinking about an open and transparent US of A?

In the 80s we all thought the USSR and China were the bad guys with their ‘Big Brother’ approach to controlling the masses and the US the pinnacle of freedom and liberty. We could not have been more wrong about the US.

The article expresses what all thinking people must feel at this time. A profound admixture of sadness for Manning, anger at his treatment and the injustice of his conviction, and deep admiration for his heroic example. We really are in an Orwellian nightmare when espionage no longer has to mean dealing with the enemy. Can we please now leave the US alliance ? I would like our country to have alliances with country’s committed to freedom and liberty.

We need Government for a workable society. I believe in Democracy and people. Call me a Humanist if you will. The problems we see so clearly with the whole Manning saga is that venal, small minded people insinuate themselves into the process of Government and cause so much harm. There is truth and there is justice, unfortunately there are arsehats that won’t play fair. Manning pays a horrible price for doing the right thing.