Did we waste the mining boom? Let’s really test the argument

The evidence that we wasted the mining boom is actually unclear: we just don't notice how we used the vast flow of revenue. Glenn Dyer and Bernard Keane examine the claims. 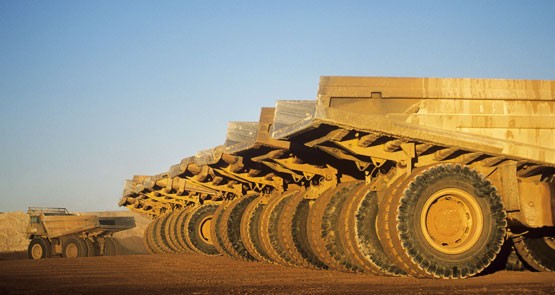 Think we “wasted the proceeds of the mining boom”? That the Howard government or the Rudd/Gillard governments — or both — failed to salt away enough of all that mining tax revenue?

What if it’s a furphy?

It’s time we subjected that argument, the latest version of which has been put forward by the Grattan Institute, to some scrutiny. The institute’s new (and otherwise very good) report on the mining boom says:

“The Commonwealth Government has not saved enough of the proceeds of the boom. Tax decreases and spending increases have been larger than Australia can afford in the long run …”

Let’s first address the idea that our current fiscal circumstances are the result of wasting the boom on tax cuts — both the Howard government’s and the Rudd government’s.

Undoubtedly successive rounds of personal income tax cuts made our revenue base more dependent on corporate tax, which itself is more dependent on the business cycle. But the primary reason the federal government has spent most of the last three years looking for savings and tax rises to offset falling revenue is because nominal GDP has slowed due to the slowing in the rate of inflation — with the high value of the dollar the big factor. That is, the budget deficit that is supposedly evidence of our wasting the boom is actually the result mainly of other factors, such as a strong currency.

Canberra faces an additional impact from the losses generated by the financial crisis for business, the huge investment depreciation provisioning by miners and those same companies now cleaning up their overvalued balance sheets by write-downs and asset impairments, and sticking poor old taxpayers with the bill. That’s where much of the “fruits of the boom” have disappeared to, and it is a key reason why the federal government’s tax take as a proportion of GDP is much lower than under the Howard government.

The government and the RBA have pointed out (but this escapes many people) that the tens of billions of losses in the GFC produced tax savings and lower tax bills for Australian business. And the hundreds of billions invested in the resources boom produced depreciation provisions that will also lower corporate tax bills. The current round of impairments and write-downs emerging from the likes of News Corp Australia, OZ Minerals, Newcrest and Newmont Australia (more than $8 billion in that lot alone) will put further pressure on federal government tax revenues (company tax).

One obvious beneficiary of the boom is super. Our pool of superannuation savings have risen from $489.5 billion in the June quarter of 2003 to more than $1.5 trillion in the three months to March this year. Yes, that has risen for factors other than the long resources boom (which continues, with iron ore and coal prices still well above the levels they were in 2003, as well as gold, copper and oil and gas), but again it reflects how “saving” is more than just a budget in surplus.

“… it was a saving of our social and human capital, given the profound damage long periods of unemployment do to workers’ skills and confidence.”

Then there’s our household savings ratio in the national accounts: a decade ago it was a -0.3%. In the three months to March, it was 10.5%. Australians have been saving at about this rate since mid-2011. The recovery in the savings rate started around 2008. In dollar terms, savings jumped from $11.3 billion in the June quarter of 2003 to more than $30 billion in the March quarter this year.

One of the chief areas of saving is by the majority of mortgage holders, who are using  lower interest rates to repay their home loans much faster than they have to. The employed, as well as business and governments, enjoyed “the fruits of the boom” as well, and have been saving.

If you’re a retailer who got used to the pre-GFC era when Australians preferred to spend rather than save, this is a problem, but it’s one example of how the “fruits of the boom” have been saved, not spent. Somehow, by listening to the big retailers, we’ve managed to convince ourselves that high saving is a problem, even as we lament we haven’t saved enough from the boom.

State governments have also struggled fiscally since the financial crisis. Both the WA and Queensland budgets are in deficit, although we don’t tend to hear as much as “wasting the fruits of the mining boom” about them. Their fiscal difficulties are driven by similar factors to those confronting the federal government: a tax base — especially the GST — that’s growing more slowly than expected in the post-GFC low-inflation environment.

Low inflation is a good thing, but like so many “good” occurrences, there’s a downside — and low inflation has put a straitjacket on government revenues when it would have been handier to have them growing at 6% to 10% a year. The strong dollar has been on the whole a big plus for the economy – it has forced companies to restructure and save and change, and many companies (large and small) have been doing that, but it has been constricting revenue growth for governments.

A final point needs to be made about the Grattan report comment that “some spending was justified by the response to the global financial crisis, and some has been invested, but underlying budget deficits now need to be repaired in more difficult times”. That spending during the GFC (more than $40 billion over several years)  was a big investment in the budget and actually generated significant savings. Along with the sudden re-emergence of the second China boom, the spending by the Rudd government kept unemployment much lower than it would have been, had we slid into recession, as we so nearly did.

That means we saw significant savings on unemployment benefits and other social welfare spending because unemployment didn’t spiral out of control, with subsequent further impacts on consumer and business confidence leading to lower growth and more unemployment. That’s what happened in the UK, Europe and the US, where those countries now struggle with poor growth and the huge budget deficits that result from it. Moreover, it was a saving of our social and human capital, given the profound damage long periods of unemployment do to workers’ skills and confidence. The money spent during the GFC produces “savings” that continue to this day.

Finally, some sensible analysis! The Grattan Institute have got it all wrong. The Howard Government did the right thing in the boom – reducing the budget deficit – and the Rudd government also did the right thing post GFC in allowing the budget deficit to rise. Between them, they enacted a superb example of stabilization policy working as it should. Yes, we can quibble about the expenditure choices in both cases but the reality is, as you say, large numbers of jobs were saved. Most Australians, and business commentators who should know better, don’t seem to understand this, or the fact that we have to continue to have deficits until the global economy turns up again. It is far too early to start cutting expenditure significantly to reduce the deficit. 2016 will be soon enough. Meanwhile, the ‘leaner and fitter’ non-mining sector is very likely to move quickly in increasing exports and import substitution as the dollar depreciates. This is all good news and the Howard and Rudd Governments should be praised, not criticized, for their respective fiscal actions.

This piece seems, consciously at some points, and unconsciously at others, to conflate the mining boom (that is, the expansion of the minerals sector since 2007) with the whole of public policy since 2007. It’s perfectly possible to believe that fiscal and monetary policy since 2007 was pretty good, and much better than elsewhere, without denying the obvious fact that neither the government nor the majority of the public good much benefit from the growth of the mining sector.

Government overspending is the narrative of choice for neo-liberal institutions when it comes to explaining the GFC, the idea is to pick a nation and fill in the details of the global crisis as if it was the fault of government spending, see: neoliberals everywhere.

Arguing that Australia overspent during the GFC is pure ideology, we’re the last success story in the world because we followed economics and didn’t slip into the neo-liberal tragedy of ideological austerity.

Usually Crikey economic analysis is excellent but this is a load of tosh. The real ‘waste’ isn’t fiscal but was the opportunity costs (i.e. waster opportunities) associated with investing this once-in-a-generation windfall opportunity into re-election tax cuts rather than the infrastructure that would help grow the country after the boom ended. Instead, the Howard government spent it on tax cuts to get re-elected and Australia actually ended up with poorer transport, education and health infrastructure (and funding) than it had *before* the boom. This ‘hole’ still needs to be filled, but now we don’t have the means to do it. Such a narrow ‘fiscal’ analysis like this kind of ignores the major point IMHO.

Excellent article that broadened my thinking.