Credlin not happy? We hear Victoria is very close to signing up to the Gonski school funding deal — and that Tony Abbott’s consigliere Peta Credlin is not happy about it. Certainly if/when Victorian Premier Denis Napthine signs up, it would make it harder for Abbott and Co to complain about the plan. Watch this space …

Leckie’s back. Which senior TV executive from a national broadcaster surprised people at a program function in Melbourne recently by channelling David Leckie (ex-Seven and Nine) and his colourful and very direct speech patterns? Eyebrows definitely raised at the language used and the lack of any comment from the media present.

Qantas departures? We’ve heard a report that a senior figure at Qantas may soon leave. He has taken some leave lately. There are rumours he’s not returning to the post, but Qantas denies this, saying he’ll remain with the company.

Factional fallout hits Victorian Young Labor. Troublemakers inside Labor’s Victorian youth wing reckon the fallout within the party’s senior Right after the recent federal preselection stoushes in Hotham, Lalor and the Senate has spread to the abandonment of its annual conference. Under official ALP rules, the Young Labor Conference is scheduled to be convened on the first weekend of August to re-elect the a president and executive, but it’s been delayed indefinitely as youngsters turn their overflowing minds to the federal election campaign.

Some say the delay has locked in the presidency of sprightly Australian Workers Union organiser Shannon Threlfall-Clarke, delaying an expected transition to Stephen Conroy loyalist and Tim Pallas staffer Jesse Overton-Skinner. It is understood Overton-Skinner enjoys the support of a majority of the so-called “ShortCons”, including the National Union of Workers’ Young Labor grouping led by Josh Gilligan, giving her clear path to victory. There are grave fears any new factional bickering may change the makeup of alliances within VYL, with the potential for the Shop Assistants Union, NUW and “Cons” to form a new alliance to mirror their senior counterparts, locking out Threlfall-Clarke’s AWU forever.

But both Threlfall-Clarke and Overton-Skinner denied any split within Victorian Young Labor Unity when contacted by Crikey: “We’re focusing on campaigning in marginal seats for the election,” Overton-Skinner said, when asked why the conference wasn’t taking place this weekend.

Mining bloke-fest. We couldn’t help but note the “Diggers and Dealers” mining conference in Kalgoorlie next month will feature 45 male speakers and no female speakers. It’s not often you’ll hear Crikey say this, but thank heavens for Gina Rinehart, who’s worth more than all those blokes put together. In dollar terms at least.

Two for the price of one. We’ve had a lively response to our Crikey caption comp — we wanted to know what Margie Abbott was thinking in this screenshot from yesterday. 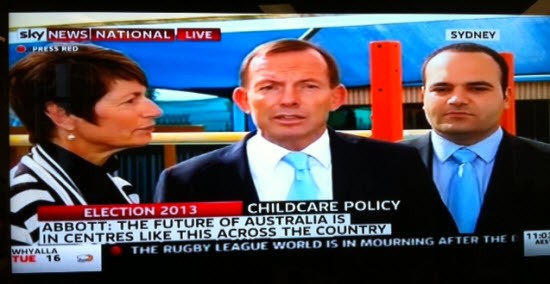 Turns out many of our readers were reminded of this: 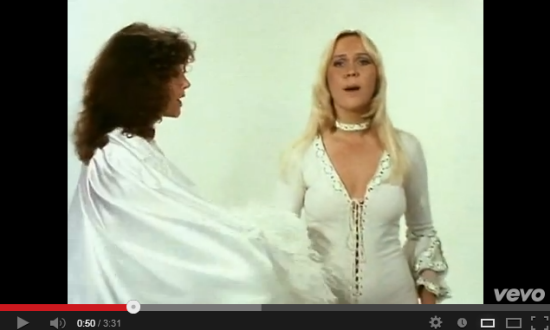 So we hereby declare our caption comp winner to be Ross, with “mama mia, here I go again”. Get in touch with us, Ross, to secure your Crikey prize.

Here are our runners-up:

What, all three of them?