Another double header in our ongoing scramble to cover potential Coalition-held seats of interest … Dunkley (Liberal 1.1%) Dunkley covers an area of bayside Melbourne about 40 kilometres from the city centre and has been effectively unchanged by redistribution. It consists of two distinct electoral parts, with Labor-leaning Frankston and its northern coastal neighbour Seaford […]

Dunkley covers an area of bayside Melbourne about 40 kilometres from the city centre and has been effectively unchanged by redistribution. It consists of two distinct electoral parts, with Labor-leaning Frankston and its northern coastal neighbour Seaford slightly outweighed by blue-ribbon Mount Eliza immediately to the south. The electorate further extends south to Liberal-leaning Mornington along the coast, and inland to marginal Langwarrin. The north-south electoral cleavage reflects a straightforward divide in incomes, the area being notably Anglo at both ends.

Dunkley was created with the enlargement of parliament in 1984 and won for Labor on its inauguration by Robert Chynoweth. Chynoweth was re-elected with a small swing in 1987 and then gained a 3.9% boost with a redistribution that shifted the electorate further north, exchanging Mornington for Chelsea. However, even this was not sufficient to hold back a tide that costs Labor nine Victorian seats at the 1990 election, with Liberal candidate Frank Ford gaining the seat off a 6.8% swing. Chynoweth ran again in 1993 and emerged a surprise winner, securing a slender 0.6% margin after a 1.9% swing. Hope for another term was effectively dashed when a new redistribution effectively undid the last, leaving Chynoweth defending a negative margin at a losing election. 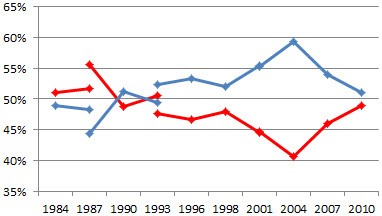 The seat has since been held for the Liberals by Bruce Billson, who by the 2004 election had built enough of a buffer to survive 5.3% and 3.0% swings over successive elections. His Labor opponent is Sonya Kilkenny, a commercial lawyer from Seaford.

Located on the western fringes of Sydney, Macquarie combines the solidly Liberal-voting Hawkesbury River area around Richmond and Windsor and Labor-voting communities on the Great Western Highway through the Blue Mountains. The seat has existed in name since federation but has changed substantially over its history, having originally been concentrated on Bathurst and Lithgow.

Macquarie’s most famous former member was former PM Ben Chifley, who was born and raised in Bathurst and first elected to the seat in 1928. Chifley was voted out in the 1931 landslide, twice failing to recover the seat before finally breaking through in 1940. Labor thereafter held the seat without interruption until the dark days of 1975 and 1977, with Ross Free recovering the seat with Labor’s improved performance in 1980. Free jumped to the new seat of Lindsay when parliament was enlarged in 1984, which took in the strong Labor areas of Penrith and St Marys. The slender margin left to Labor in Macquarie was erased by a slight swing at the 1984 election, and the seat held for the Liberals for the next three terms by Alasdair Webster. Maggie Deahm won the seat for Labor in 1993 by 164 votes, a margin that was easily accounted for by a 6.5% swing to Liberal candidate Kerry Bartlett when the Keating government was dumped in 1996. Bartlett’s margin progressed from 4.1% at the 1998 election to 8.9% at the 2004 election, at which point the aforementioned redistribution pulled the rug from under his feet. 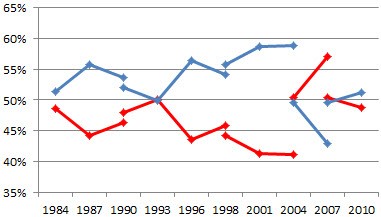 Macquarie now had a notional Labor margin of 0.5%, to which the locally familiar Bob Debus added another 6.6% as Kevin Rudd led Labor to office. The Hawkesbury area meanwhile came to be represented Louise Markus, a former Hillsong Church community worker who in 2004 won the seat of Greenway for the Liberals for the first time since it was created in 1984. Upon jumping ship for Macquarie, where her task was aided by Debus’ retirement, Markus picked up a relatively mild swing of 1.5% that was nonetheless sufficient to secure her a margin of 1.2%.

Labor’s election for the second successive elections is Susan Templeman, principal of Templeman Consulting, who promotes herself as “one of the country’s leading media trainers and coaches”.