The mining boom wasn't too bad for the economy, a new report finds -- but the interpretation depends on your ideology. Crikey's Glenn Dyer and Bernard Keane report.

In the past five years we have been subject to an enormous number of forecasts — from the downright amazing (the size of the investment boom) to the scary (inflation, soaring wages and recession, the dollar going to $US1.15) and the downright wrong (the so-called “Dutch disease” — the supposed relationship between an increase in mining and a decline in the manufacturing sector — eating the heart out of manufacturing, and the fruits of the resources boom not being shared between the states and different sectors of the economy).

Some stand completely discredited, others linger — forecasters and their shills in the media and among the myriad consulting economists and think tanks never say, “sorry, we were wrong” .

But unusually, one mob of economists have produced a report on the Australian economy that doesn’t forecast doom and gloom unless productivity is improved, industrial relations deregulated, spending is slashed and Australia is made a cheaper place to do business. However, differing readings can be taken from the same set of words, depending on where you stand ideologically.

The report from the Grattan Institute released this morning generated a variety of media reports. Fairfax papers found a positive story: “Industry set to bounce back“, from the excellent Peter Martin. Martin picked up a key element of the Grattan report, that manufacturing had survived the supposedly apocalyptic period of the high dollar “in reasonable shape”. But over at The Australian, with its continuing obsession with all things deficits and debt (channelling the opposition and the likes of shadow treasurer Joe Hockey and opposition finance spokesman Andrew Robb), they preferred to focus on the report’s observations about fiscal policy:

“Australia has squandered nearly all of the $190 billion windfall from the resources boom over the past decade through a raft of unsustainable government spending programs and tax cuts.”

As the report shows, Australia’s structural budget balance decline began in 2003 under the Howard government, something the Parliamentary Budget Office noted, and for which it was attacked by some on the Right. Although that didn’t quite come through in the story.

But the bottom line from the Grattan Institute report is the realisation that, as numerous senior officials at the RBA have pointed out in the past few months, the country has come through the biggest mining boom in history with the greatest positive shock to our terms of trade and national income ever, without triggering the usual end-of-boom surge in wages and inflation and inevitable crunch and recession.

But don’t take our word for it. Ask the Canadians, who are regularly cited as more competitive than Australia, particularly in mining. A non-partisan business-funded think tank, the Conference Board of Canada, recently released some productivity data as part of its How Canada Performs program. It points out that Australia was “the top performer and the only country to merit an ‘A’ for labour productivity growth in 2012”. That came after weak performances in 2010 and 2011, when we merited a C, along with the Canadians. 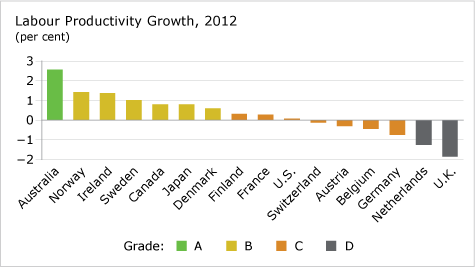 The floating dollar has helped achieve that, and while it has caused enormous pressures for wide sections of the economy, especially trade-exposed areas in manufacturing, tourism and agriculture, it hasn’t killed them off, despite a flood of stories right across the media about our dying tourism, manufacturing and retail sectors.

What the Grattan Institute is really saying that all those claims about the impact of “Dutch disease” on Australia manufacturing (a phrase created by The Economist, and trotted out to describe the impact of the high dollar on Australia last year by the same magazine) have been overblown. The report also adds to the repeated expositions from RBA governor Glenn Stevens and others that the idea the boom didn’t help the wider economy is horribly wrong. Grattan said:

“Benefits have been spread across the country as the boom helped to offset the impacts of globalisation and technological change on lower-skilled workers. Australia has avoided the big traps in mining booms, such as high inflation.”

And that’s the biggest achievement of management of the boom by the RBA and federal government — the biggest investment boom in our history hasn’t all ended in tears. And that is a far better achievement than the transitory nature of budget deficits or surpluses.

One of the reasons why the high dollar didn’t kill non-mining industries is because — despite the pleading and rent seeking — most got on with adjusting to a more competitive environment. And so did their workers: Australia’s labour productivity has significantly lifted in the last 18 months, despite the incessant chatter from business, the opposition and journalists at The Oz and the AFR that the Fair Work Act is a huge national handbrake on productivity.

Massive inflation didn’t happen? RBA inflation calculator tells me inflation 2002-2012 was 31.5%, yet the largest purchase a whole generation will ever make in their lives and will account for 2/3 of their life long spending inflated 100%. Unless there’s mass deflation elsewhere in the economy to the tune of $1trillion to counter the housing bubble, the RBA figures don’t make sense. I’m not buying the Bonernomics anymore and I’m moving all my wealth to the US.

The Leftist Labor party were very successful, and for that they must be mercilessly punished.