Cambodians have voted and while strongman Hun Sen retains a majority in Parliament, his grip on power is slipping. What will he do now? 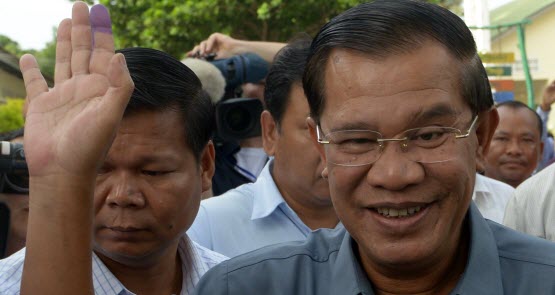 The only surprise in Cambodia’s elections over the weekend was that the victory for Hun Sen’s Cambodian People’s Party was reduced to a comfortable rather than an overwhelming majority. For a “democracy” in which the ruling party and the state machine are, in effect, as one and there are widespread allegations of electoral fraud, the CPP’s reduced majority was a slap in the face to Hun Sen (pictured, after voting) and his strong-man style of government.

The CPP lost 29 seats to end up with a majority of just eight, for a total of 68 of the Cambodian Parliament’s 123 seats. This means the CPP no longer has the two-thirds majority required to change the country’s constitution.

Observers said the elections, which have extended Hun Sen’s 28 years in power for another five years, were compromised by electoral irregularities and intimidation, both of which have been features of Cambodia’s previous elections. The announcement of the election results has led to rioting in Phnom Penh, with Hun Sen’s home being protected by police.

The election results now throw into doubt the 61-year-old Hun Sen’s plans for having one of his three US-educated sons succeed him as Cambodia’s leader. Hun Sen has said he intends to remain in power for another 10 years, or two terms, before handing over power. A cabinet reshuffle, and perhaps more extensive administrative changes, is now likely following the challenging election result.

Despite claimed irregularities and that opposition figure Sam Rainsy only returned from exile nine days before the elections, the CNRP, which allies the Sam Rainsy Party with the recently formed Human Rights Party, made major in-roads into the CPP’s structural base. The CPP and its forerunner Kampuchean People’s Revolutionary Party are melded into the fabric of the state, to the point where the party and the state are in some cases indistinguishable.

Following UN-supervised elections in 1993, which the CPP lost to the royalist FUNCINPEC, Hun Sen refused to accede power and demanded to go into coalition. This farcical “dual government” lasted until 1997 when the then-disintegrating Khmer Rouge was absorbed into the two main parties, leading to a show-down. That came with the CPP launching a coup against its coalition partner, FUNCINPEC — briefly re-sparking civil war.

The 1998 elections returned the CPP with a majority in its own right but were marred by extensive violence and intimidation. Meanwhile, Hun Sen increased his North Korea-like cult of personality. Cambodia has since seen the appearance of Hun Sen schools, Hun Sen parks and Hun Sen clinics across the country. The CPP has branch offices in each village and district. Despite CPP offices being marked by its symbol of a celestial nymph spreading largesse, these offices have tightly controlled potential political dissent.

These elections results will now have Hun Sen considering whether he further tightens control over the state and its failed democracy, or whether he accedes to what increasingly appears to be popular will and reconsiders his, and his sons’, political future. Going on the past record, the former is more likely.

Enjoyed the article, but confess I’m mystified as to how 68 to 55 can be described as “a majority of just eight”.