The Coalition's infrastructure policy, announced this week, is appropriately unambitious, sensible and will provide greater transparency. And doesn't promise any white elephants. 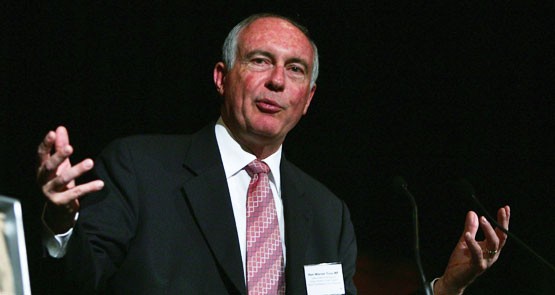 With little fanfare this week, the Coalition has produced a smart, sensible, realistic infrastructure policy. The fact that it’s the leader of the Nationals that has produced it is an even more welcome development.

As we discovered under the Howard government, Nationals and infrastructure go poorly together. That government famously wasted over $160 million on a 1400-kilometre white elephant, the Alice Springs-Darwin railway line, and National Party ministers were found to have engaged in blatant pork barrelling of “regional development” funds.

But the policy released this week by Warren Truss builds on the good work of Labor in bringing more rigour to infrastructure funding decisions by committing to rectify the one significant flaw in Infrastructure Australia’s operation: it doesn’t as a matter of course release its assessments of infrastructure projects.

Under Truss’s plan, Infrastructure Australia would be required “to routinely publish public cost-benefit analyses for all projects being considered for Commonwealth support or investment”, providing greater transparency for infrastructure decision-making.

It’s the sort of commitment one only makes in opposition. Once in government, the urge to keep such potentially inconvenient assessments — which might reveal that a politically-favoured project is a complete waste of money — becomes much stronger.

Truss has also committed to a rolling 15-year pipeline of projects, to be reviewed every five years. Wisely, they’ve avoided the temptation of committing to developing any sort of national transport plan or strategy. Such documents are a waste of time and previous versions litter bureaucrats’ shelves in Canberra, their spines uncracked, forgotten the moment the accompanying media release went out.

And Truss’s proposal for infrastructure funding is also worthwhile for what it doesn’t say:

“After meeting with a large number of private investors, superannuation funds, construction companies and many others with a direct interest in infrastructure, there is no ‘silver bullet’ to unlocking the kind of investment we need. It is clear that a one-size-fits-all approach will not successfully bring more projects to market.”

For an old transport speechwriter, such words are a welcome dose of common sense, with Truss resisting the temptation to declare the complex challenge of funding infrastructure solved via the latest piece of whizz-bang financial engineering that glosses over the basic problem of apportioning risk. Truss’ “solution” could be portrayed as simply deferring the problem — he proposes to establish a “Funding and Finance Advisory Unit” inside within Infrastructure Australia — but it’s a realistic acknowledgement the Coalition from opposition isn’t going to solve a financial and policy problem that has bedevilled governments for over 20 years.

The policy is by no means perfect — unaddressed is the Coalition’s arbitrary and absurd retreat from funding metropolitan public transport, which is likely to have significant benefits in terms of reducing the growing burden of congestion. And Truss approvingly cites a Business Council claim about building costs in Australia that Crikey demonstrated was nonsensical a year ago. But by committing to greater transparency and a sensible approach to the difficult problems of infrastructure funding, Truss’ policy further improves infrastructure decision-making beyond what Labor has delivered.

I think that the omission of a clear statement about metropolitan rail is more than just an imperfection, it also casts doubt on the value of the promise to release Infrastructure Australia assessments.

Let’s look at that quote again: “to routinely publish public cost-benefit analyses for all projects being considered for Commonwealth support or investment”

What does the juxtaposition “publish public” mean, before cost-benefit analyses? If they are public, surely they are already public? Does it relate to a subset of projects that are proposed to be purely funded by public sector, and if so what proportion of projects would that apply to?

Secondly, the release only applies to projects that are “being considered for Commonwealth support or investment”, so presumably they won’t release details of projects that they didn’t choose to support? Choices only make sense in light of what the other options were.

The most unequivocal statement of coalition policy with regard to Infrastructure remains Tony Abbot’s announcement that a coalition government would not fund metropolitan rail (as a matter of ideology, and by implication regardless of findings related to cost-benefit status).

The Alice Springs to Darwin line hasn’t been a white elephant at all – it’s been a significant contributor to the mining boom. What it has (so far) failed to do is attract the expected container traffic. So immediately we see two very big problems with cost benefit analyses: Some things fail to meet expectations, while others greatly exceed them. Another problem is timescale – the line’s been open less than a decade. In another 20 years it could well attract a huge amount of container traffic.

More transparency is a good start, but the coalition’s plan doesnt go anywhere near far enough. Rather than just publishing the cost benefit analyses, they should make absolutely everything public and provide financial incentives for identifying improvements.

Very encouraging, another three years in opposition, in order to hone these new found policy skills under a new leadership, and the Federal conservatives might just be fit to govern.
Otherwise voters might be advised to keep the present balance between federal Labor and state Liberals which has developed since the last two federal elections.
Then again, voters have always been very keen to avoid putting all their eggs in the one political basket.
Something those pea brained Poll Bludgers, over there, never seem to take into their so-called calculations.
Perhaps Bernard can have a little word with them on this consistent phenomenon of Australian voter behaviour.
Meanwhile,the Nationals correspond to The Greens in the “other”, universally reviled “Coalition”.
And no-one gives much weight to that minor party’s ability to write policy for the whole government, why then would any credit be sensibly given to an essentially neutered National party having any real influence in “their” coalition?
It may be good for Mr Truss to be seen in a positive light, (he owes you, Bernard) in the run up to an election but this is somewhat ruined by the general knowledge that he will be replaced as leader by the Clown Prince Barnaby after the election, now that Tony Windsor is no longer contesting his seat of New England.
Might be different with Malcolm as leader.
Think about it Warren, do you really trust “Dear Tony”?

You have to admire the thick hide of the Tories. Warren (Joh was never convicted of bribery)Truss holds the next door seat to where I live. Part of this seat is a stretch of 2 lane Bruce H’way with a shocking death toll. 11 years of the Howard-Costello miracle and not a lot of road spending. Once in Opposition Warren Truss was complaining big time about the need for more spending on the Bruce. Like the other LNP right wingers on the S_Coast who suddenly discovered hospital funding as an issue after the 2007 federal election loss and staged protest marches about a new hospital at Kawana which Anna Bligh was building. The one the same LNP types are going to privatise.

The Alice-Darwin railway a white elephant, and federal spending on it wasted? The company OM Holdings consists essentially of the Bootu Creek manganese mine north of Tennant Creek plus downstream transport and processing operations extending to China. None of it would exist without the railway. OM Holdings had revenue exceeding $400 million in 2012 alone.

That’s just one example off the top of my head. I’m not saying the line is a sure-fire winner under any and all reasonable cost-benefit metrics, but Keane’s judgment may yet prove premature.