Election date rumblings. We hear rumours that Labor is poised to start buying ad space in the next few days, ahead of an August 31 federal election. There are whispers Rudd may press the button on Sunday or Monday.

Will the chatter amount to anything? There was an entertaining divergence of views yesterday on the election date between News Corp hacks Simon Benson (“August 31 is top tip”) v Dennis Shanahan (“Kevin Rudd … is now unlikely to call a poll until at least September 21”). Both seem to have backed away from their stories today (Benson much more so than Shanahan, who’s just hedging a little). Time will tell who — if either — is right. Meanwhile, we note Rudd will star on the Bolt Report on the Ten Network on Sunday (“Rudd head to head, the boats and more”, Andrew Bolt promises).

Polling in Melbourne. These questions are being asked by Galaxy pollsters in Greens MP Adam Bandt’s electorate of Melbourne — get ready for a splash in the Sunday Herald Sun. The pollsters are certainly getting in early with their hung Parliament question — and why all the interest in Malcolm Turnbull as opposition leader?

Which candidate will you vote for at the federal election?

Who is your preferred PM?

Do Federal Labor MPs’ support for the east-west tunnel [a major new road across Melbourne] make you more or less likely to support your preferred candidate?

Does the recently announced PNG solution make you more or less likely to support your preferred candidate?

Does the recently announced shift from a carbon tax to a floating price make you more or less likely to vote for your preferred candidate?

If Adam Bandt had the deciding vote in the Parliament and could choose to support Rudd or Turnbull who should he support?

Katter’s political career falters. Heads turned when prominent gay marriage advocate (and Bob Katter’s half-brother) Carl Katter joined the ALP, and there was talk of him running at next year’s Victorian state election. Has he cruelled his pitch? This from a mole:

“Carl Katter has been ditched as the likely Labor candidate for Prahran in the 2014 Victorian state election. Local members of the party became concerned at his erratic behaviour on social media that resembled his brother’s ability to create a media storm. A gay website published tweets by Carl attacking well-known gay Liberal Tim Wilson.”

You can read the tweets here. We put that to Carl Katter, who said “this is all news to me”. He confirmed he was a member of the Prahran ALP branch and said “I’d love to represent the people that supported me”, but he said he was not pursuing preselection for the Victorian election at this stage and was unlikely to run. Katter said it might well be the case that some people were miffed with his comments and tweets, but he stood by his frustration with gay Liberals.

So it looks like we might not have another Katter in Parliament for a while longer … (Bob’s son Rob sits in the Queensland Parliament).

Hanson weighs in on climate change. Back to school, Pauline. This question has been posted on her official Facebook page: 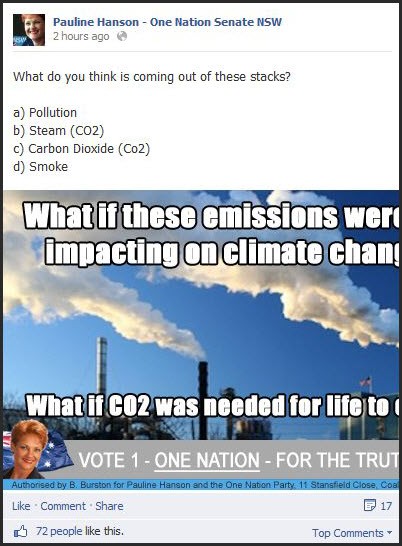 All we can say is if you think steam is made of carbon dioxide, you really shouldn’t be pronouncing judgement on the science of anthropogenic climate change. Because steam is water vapour.

The post was fixed after plenty of social media people pointed out the error. For the record, here is Hanson’s judgement on climate change (click on the tearout to read her views in full):

Hanson’s Facebook page is a treasure trove. We’re also intrigued by this:

Crikey enjoys the social media foibles of our pollies and wannabe pollies — if you spot something interesting, email us a screenshot.

Obama’s babby moment. The birth of a new monarch in Britain has inspired Barack Obama to tweet this pic of himself as a junior (and Bill Clinton tweeted a pic of himself as a 16-year-old) — if you’ve got any pics of Australia’s politicians as kids, why not share them with Tips? 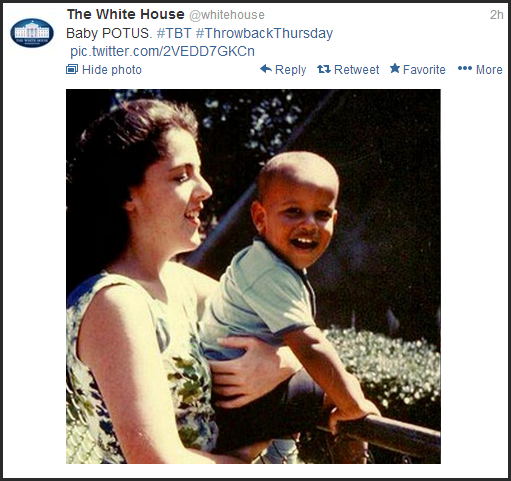 Crikey strikes. Last week we brought you a tip that Coles at Bondi Junction had a sheet on its cash registers saying if there were more than two shoppers in the queue ahead the store would take $5 off the bill — but apparently there was no way to claim the $5. Here’s an update from a mystery shopper:

“The signs at Coles Bondi Junction advertising $5 off if you have to wait in the queue have been removed. One wonders how many $5 discounts were ever given in that brief shining moment when an attempt was made to keep the customer satisfied.”

Co2 with a small o? That’d be Cobalt.

So carbon dioxide is apparently cobalt. Learn something new every day.

The funny thing is that Pauline is almost, sort of, maybe, right in a round-about sort of way.

Water vapor is indeed a greenhouse gas and is actually more important than CO2 in the grand scheme of things.