Here's one no one saw coming: colourful New York Post editor-in-chief Col Allan is returning Down Under. But what will News Corp Australia chief Kim Williams make of his new adviser?

In a memo to staff this morning, News Corp CEO Robert Thomson said he had requested Allan make the move.

One News insider suggested part of Allan’s mission would be building bridges between Williams and key editors, including Chris Mitchell at The Australian and Paul Whittaker at The Daily Telegraph. Both men have had an at-times testy relationship with Williams, and have fought vigorously to maintain resources and editorial control at their papers.

Williams and Allan are expected to be an odd couple. While Williams is an urbane opera-lover, Allan is best known for urinating in a sink during Tele news conferences and for visiting a New York strip club with Kevin Rudd. He was nicknamed Col Pot for his domineering management style during his editorship of The Daily Telegraph. 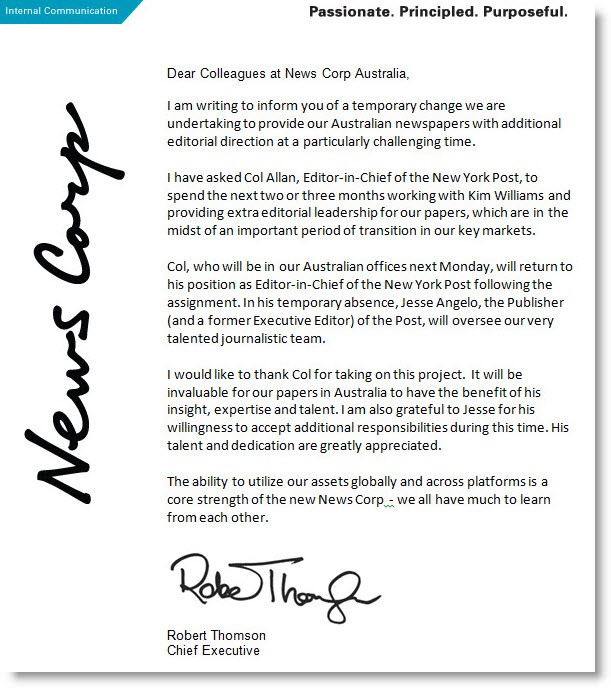 There has been speculation for years that Allan would return home to run News’ Australian papers. But Thomson insists in his memo this is only a “temporary” assignment and Allan will return to edit the Post. It’s unclear what the assignment means for News Corp Australia’s editorial director Campbell Reid.

Allen lifted circulation during his time at the Tele and became legendary for his ability to turn relatively minor stories into front-page splashes. He ran a survey on the number of children born out of wedlock on page one under the heading “A NATION OF BASTARDS”, as Stephen Mayne recalled in a 2000 Crikey profile. He also ordered the Tele‘s New York correspondent to fly to Washington, obtain a sheep, and tie it to the White House gate to protest US import quotas on Australian lamb.

Since 2001 Allan has been editor-in-chief of the New York Post, an unprofitable tabloid that is impossible to ignore because of its often outrageous front pages. Allan’s memorable cover splashes include “AXIS OF WEASEL” (accompanying a story on Germany and France’s opposition to the Iraq War) and “V-D DAY: Paris liberated, bimbos rejoice” on Paris Hilton’s release from jail.

There have been slip-ups though, big ones. In 2004, Allan ran a front-page story announcing Missouri Congressman Dick Gephardt would be John Kerry’s running mate (he wasn’t). And the Post was ridiculed for its error-prone coverage of the Boston bombings — two men, who featured on the paper’s front page, are suing over an article that made them look as if they were suspects in the case. The paper was accused of racism in 2009 for publishing a cartoon depicting Barack Obama as a crazy chimpanzee.

A big rat jumping on a sinking ship from another sinking ship? The rags couldn’t get any worse could they? They don’t even make decent toilet paper. Crooked fuzz,the LNP and Rudd must have asked for a wage rise. Did a great job helping Obama get re-elected while supporting romney. This should be good.

He’s finished playing with his Weiner?

Nice one Klewso. The Teflon Turds Empire built on bullshite & killing the truth one lie at a time

Col must be out here to sloganeer Tones into the Lodge…