A candidate for the Liberal National Party in Queensland was found guilty of professional misconduct by the state's chief legal discipline body, Crikey has learned. David Lin says they were "clerical errors".

An adverse 2007 ruling of Queensland’s Legal Services Commissioner — obtained by Crikey — reveals Lin was guilty of failing, on three separate occasions, to operate his trust account in a diligent and competent manner as required under the Trust Accounts Act.

Lawyers must build a impermeable firewall between their own accounts and trust accounts reserved for clients’ money. It is strictly against the law to mix the two together.

Lin was publicly reprimanded and ordered to pay a penalty of $2000 and a further $1000 to cover the LSC’s costs. He did not contest the application, and the commissioner noted there was no evidence of dishonesty or seeking to obtain a benefit, which would have constituted a more serious offence. 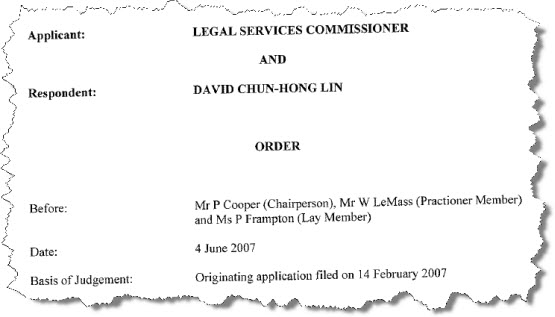 Lin, who is still a lawyer, is the Taiwanese-born founder of Brisbane’s Sushi Station restaurant chain. He has pitched his candidacy as being built on “a solid business foundation … from humble beginnings”. He says he immigrated to Australia “to make a life free from burdensome government oversight and control”.

In an official statement provided by a campaign intermediary, Lin told Crikey he “accepted responsibility for three accidental clerical errors by a staff member within my office”:

“Two of these errors were brought to the attention of the Queensland Law Society by me as soon as I became aware of them. My firm then underwent a standard examination by the Law Society, which all Queensland law firms are subjected to as a matter of routine. There was no suggestion at any stage that there was a deliberate attempt to commit an offence.”

Rankin is held by retiring former Labor minister Craig Emerson on a margin of 5.4%. It was previously considered a safe seat before the Gillard government’s disastrous performance north of the Tweed at the 2010 election. Lin will take on former Wayne Swan chief of staff Jim Chalmers after Chalmers saw off a challenge this week from former Forde MP and Kevin Rudd pick Brett Raguse for preselection.