Small shifts in the Greens vote aren't always the disaster some parts of the media beat them up as. The party has a great opportunity to capitalise on Labor's tougher boats policy. 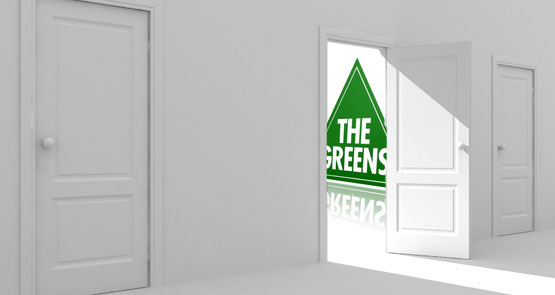 You’re in a game. There are three doors. Behind one is $100,000, the other two have nothing. You make a choice, and then the game-master opens one of the other doors, shows that it is empty, and gives you the opportunity to change your choice of door. Should you? The answer is yes. The unopened door not chosen by you has a two-thirds chance of having the prize behind it.

This conundrum, known as the “Monty Hall problem”, trips up a lot of people, who miss the basic asymmetry involved in the game*. There is a lot of this about, no less in the twitchy watching of Greens polling numbers in Oz politics. In 2007 the Greens polled 7%. In 2010 they polled 11%. In the last couple of years they dipped to 7% again.

Now, after the Papua New Guinea deal, their numbers may be shooting up again, especially as the deal turns out to be a messy disaster in the making. Every dip and rise is taken as some existential disaster or triumph — usually the former, with the Greens allegedly about to wink out of existence altogether.

Doubtless the Greens would prefer to be on 11% than 7%, but the fluctuations would only be a disaster if they were competing with nine other parties who were all around the 10% mark — that is, if there was parity. But with three asymmetrical parties it becomes a little more complicated.

If we look at the usual ALP primary and the Greens primary as one unit — say 40% and 10% respectively of the total vote as a simple baseline — when there’s some inner-city elites chai-and-sodomy gathering of 50 people debating who to vote for, that is two of those 50 switching back and forth, from one election to the next. Crunched down into the sort of units where political debate and discussion happens — neighbourhoods, workplaces, schools, friendship networks, etc — the asymmetric effect on the two parties can be seen.

So when that magic three- to four-point swing goes from three Greens to Labor it looks like a disaster for the Greens and a relatively small gain for Labor; when it goes the other way it looks like a relatively small loss from Labor, compared with some triumphal return to the Greens. But in both cases it’s the same thing — an English teacher in Bendigo and her aromatherapist partner have got the hump with either Rudd or Milne, or switched on the accession of Gillard/retirement of Bob Brown, as the case may be — the pattern has been repeated across the country, and the poll numbers have shifted.

“Thus the polling fictions continue, and no one really wants to look behind the green door, so to speak.”

That of course relies on one, I think reasonable, supposition: the Greens are a class party, with a small but solid class base who put a floor under any fluctuations. That makes them unlike their predecessors the Democrats, a coalition of diverse political forces, who were thus exposed to the horror of going out backwards and polling an asterisk. If there were any chance that the ALP could recapture the Green core, it disappeared last week.

That asymmetry doubtless creates some nerve-shattering lurches, for the Greens, but it’s arguable that they are better placed than the ALP to withstand it for two reasons — first, the volume of the vote means that there’s more capacity to round it up by doorknocking and personal contact (that’s if they do pound the pavement, at which they are sometime remiss). The ALP with plummetting numbers is bailing out a very leaky boat, with a pretty leaky bucket.

The second reason is, as I noted yesterday, that Labor has so deconstructed its own class base and broad class coalition that it has now set itself an extra task, which the other parties are not subject to — US-style, it must now round up a whole sub-section of its class base it could hitherto have regarded as assured. That must be done in the face of a virulently hostile media oligarchy in News Crop. It’s a measure of how residually shifted towards Labor Australia is that anyone votes for it at all.

How come this political process between Labor and Greens so rarely gets a sober assessment? The lack of a genuine class analysis of politics among the shrunken mainstream commentarati is one; another is their concomitant desire that the Greens would disappear so they could focus on stories about who’s up who in 19 different factions in a two-horse race.

But so too a lot of journalists have simply internalised the hatred directed towards cultural and knowledge workers characteristic of the new right-wing anti-“elitist” populism, deployed by pundits in thrall to the Murdochs, Packers, Palmers, etc. Even though their workaday trade remains shuffling words around on a screen, they can’t quite regard this vital sector of society and economy as “real” or of “equal citizenship”.

It’s the latest version of the pervasive myth of the Bush, as formulated in the 1880s, when Australia began its journey to being one of the most urbansied countries in the world. Despite the evidence of our eyes, and our daily lives, a lot of people still have some 1970s beer ad running in their head with blokes throwing fleeces, blowing up shit, etc, etc.

The reality — that we are a giant quarry with a small workforce surrounded by a vast mesh of suburbs and coffee shops — is rather less palatable, less of a myth to live off. Thus the polling fictions continue, and no one really wants to look behind the green door, so to speak.

*Essentially the game-master is choosing between the two doors that you haven’t chosen — because if he or she opened your door the game would already be over. And the game-master isn’t going to open a door that has the prize behind it, because then the game would be over. So the two doors you haven’t chosen are essentially one unit, with a two-thirds probability of having the prize in it. By switching your choice to the unopened door that isn’t yours, you are choosing the two-thirds unit, there thus being a two-thirds chance of the prize being there. Over an extended series of rounds it’s rational to switch even if a penalty fine of 49.999…% is levied on a prize resulting from a switched choice.

ROTFL Worth the price of admission Guy.

I can’t see any point in voting Green in the Lower house – the odds of their getting a seat there, from the last election, are 149:1 (0.666% of seats – devilishly hard – from “10”% of our primary vote?). And if you look back over the years, since it’s inception, the number of seats won (1 – 2 if you count Organ) to the number that have been decided, those odds blow out to where you can “infinity”.

Bulls+it baffles brains, Guy!!!!
90+% of the Australian voting public see the Greens as an extreme, ‘watermelon’ party, and wouldn’t vote for them in a fit. Just because you can play games with the intelligentsia, does not mean voters will ever change their mind on this party.
Anti-intellectual sentiment is still alive and well here. People don’t like political parties, or journalists for that matter, who continually berate them. I thought, being so smart, you would know that. Apparently not!!

CML, thanks for helping prove the very point guy was trying to make: “this political process between Labor and Greens so rarely gets a sober assessment”

Stop talking about boats policy, it is trading humans.