Craig Thomson's laywer is suing the NSW ALP for tens of thousands of dollars in legal fees. But Sussex Street says it's an ambit claim and will fight it in court. Crikey has the statement of claim.

Craig Thomson’s lawyer has launched a desperate legal bid to secure tens of thousands of dollars from the New South Wales branch of the Labor Party.

In a statement of claim lodged in the NSW Local Court last night and obtained exclusively by Crikey, Chris McArdle reckons the ALP owes him over $36,000 in damages for “legal services to Craig Thomson” as his client fends off fraud charges for unauthorised p-rn and pr-stitute use.

McArdle cites apparent phone conversations and text messages with NSW general secretary Sam Dastyari in February in which Dastyari allegedly agreed to pay “$35,000” in two instalments. McArdle is suing for the full amount plus interest. He says he continued to provide the advice on the understanding the cash would be paid. McArdle says Dastyari told him not to identify “McArdle legal” on the invoices and that he later texted Dastyari an “account number”. Dastyari is claimed to have made direct representations to Thomson about the bill.

NSW Labor wholly rejects the suggestions, considers them a “try on” and will fight for its rights vigorously in court. It is understood McArdle has never done any official work for the party. At the time, Thomson was suspended by the ALP but despite languishing on the crossbenches was still technically a rank and file member. 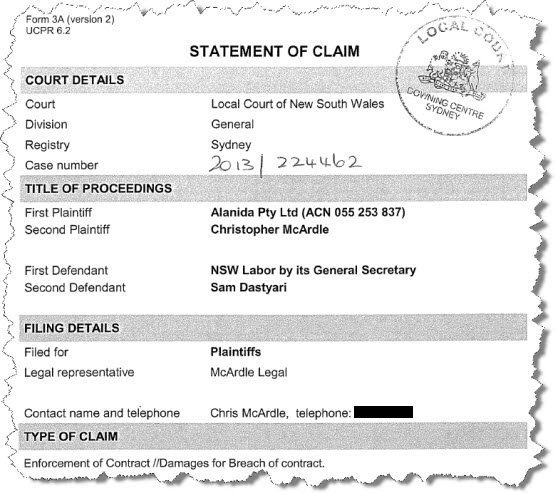 McArdle told Crikey this afternoon that “the press did not obtain this document from me or anyone associated with me. The statement of claim is based on fact and law. We expect to recover $36,000.”

Thomson is re-contesting his Central Coast seat of Dobell as an independent, finally handing in his membership card to run against endorsed candidate Trevor Drake in May.

He recently launched a “Craig Thomson legal defence fund” so members of the public can help him fight the 173 counts of credit card fraud and theft, currently before the Melbourne Magistrates’ Court. The former Michael Williamson protege is accused of misusing $28,000 in Health Services Union money when he was national secretary from 2002 to 2007. His financial situation is believed to be precarious.

McArdle, a former Australian Workers Union organiser, made several bombastic appearances on Sky News last year defending Thomson after police raids on his client’s house. He issued grave warnings about defamation and suggested the NSW police had tipped off the media so they could film his client being perp-walked to a waiting vehicle.

Earlier this month McArdle sent a wide-ranging email to the NSW public and the legal fraternity asking for cash to attend a $150-a-head dinner at CBD spiv den the Tattersalls Club. The event was postponed but will take place tonight with a speech by aging Labor identity Bob Ellis.

Last year, the NSW Labor confirmed it had stumped up $350,000 in legal fees before Thomson was suspended from the party in May 2012. Over two-thirds of that amount went to Fairfax Media after the Central Coast MP withdrew defamation action over the original 2009 report in The Sydney Morning Herald penned by future Greg Combet adviser Mark Davis that highlighted the alleged expense irregularities. At the time, a power-struggle between national secretary Kathy Jackson and Victorian Labor Unity powerbrokers was threatening to engulf the union.

@ jack linsey Agree with your comments. Considering that Thomson has been all but hung, drawn and quartered by the MSM, I can’t imagine why we need a trial at all!
As for the NSW Labor Party: they have completely abrogated their responsibility to Thomson as far as I’m concerned. He may have been suspended at the time, but he was still a member of their organisation. Guilty until proven innocent, obviously!!

A small turn out of around 22 was reported. Here http://www.michaelsmithnews.com/2013/07/the-future-of-citizen-journalism-we-grabbed-a-bloke-passing-city-tattersalls-to-file-this-report-.html
Attendance at this city fundraiser is an indicator of the level of public support for Independent Craig Thomson. The court of public opinion is easier for voters. Who do make their “verdicts” know at the ballot box. No long delays like the drawn out process of jurisdiction through our law courts. Edward James

Good grief now we have links to the partisan Michael Smith.

Media “personality” Prue McSween is crowing on facebook about the status of those who attended Thomson’s fundraiser. Why not just get Kate McClymont who went in tooth and nail to denigrate Thomson for daring to request legal help (and who has been spectacularly wrong on many facts) to put the boot in as well.

The headline is unfair. I have no idea whether McArdle is entitled to make his financial claim but neither does crikey and just because NSW Labor says it’s a “cash grab” it is unethical for crikey to run a headline that promotes the defendant’s case.

Ha haa r har ahr ahr newsworthy. I do not think so crikey.com Michaelsmithnews.com is looking more and more like the crikey.com of old every day! Edward James