Earlier we told you about the shindig held to celebrate Australian Financial Review shitstirrer Joe Aston’s 30th birthday. Interesting that he keeps putting Justin Hemmes -- who paid for the drinks -- in his column ...

It turns out Hemmes is a regular star in Rear Window, appearing 22 times in the past year.

Here’s a sample from March:

“Spare a thought for embattled shareholders at construction/drilling interest AJ Lucas. Rear Window has previously canvassed the troubled reign of executive chairman Allan Campbell , who is locked in a legal battle with Justin Hemmes’ Merivale hospitality empire over building defects which, with costs, may slug the builder north of $30 million in compensation.”

And last August (on p4 rather than Rear Window):

“Sydney lord mayor Clover Moore and Merivale’s Justin Hemmes have taken the next step in emulating Melbourne’s bars and laneways strategy, this time by targeting business people and the Chinese. Hemmes, Sydney’s most prolific hospitality entrepreneur, has launched the 250-seat Mr Wong in Bridge Lane — the fifth Cantonese eatery to open in the city in the past two months.”

“This may be apropos of nothing, but Rear Window has discovered that Foo Fighters front man and former Nirvana drummer Dave Grohl has snuck into Australia and is moonlighting as a sommelier at Justin Hemmes’ French brasserie Felix at The Ivy in Sydney … Get down there ASAP for an autograph ’cos we have no idea how long he’ll be in town.”

So is there a cosy “free drinks for favourable mentions” arrangement between the pair? Not so says Joe. “Everyone knows I’ve been friends with Justin long before I was at the Fin Review,” Aston told Crikey. “Nine out of 10 times he’s mentioned would just be his name before a restaurant.” It’s no suprise, Aston adds, that Hemmes regularly features in his column given he owns many of the favourite hang outs for Sydney’s corporate heavies.

But what of Fairfax’s code of conduct, which states: “We will not accept gifts or inducements which could impair our judgement or be perceived to be a conflict of interest, bribe or inappropriate gift”?

“I don’t think it was an inappropriate gift,” Aston said. “I didn’t drink all the alcohol – there were lots of people there … I got a picture frame from Malcolm Turnbull and I am going to go easy on him for months,” he added sarcastically. “It was a birthday party with friends – that’s it.” — Matthew Knott

Joye undisclosed on rates commentary. YBR Funds Management director Christopher Joye had another commentary in The Australian Financial Review this morning, this time on whether the Reserve Bank would cut interest rates after yesterday’s weakfish consumer price index data for the June quarter — without any disclosure of his funds management role at financial services group Yellow Brick Road. The group is listed and controlled by Mark Bouris, Nine Entertainment and Macquarie Group.

Seeing the topic of interest rates is rather close to the central area of interest for Yellow Brick Road and Joye — mortgage rates and mortgage-backed securities — you’d reckon a bog standard disclosure about the involvement with Yellow Brick Road would be automatic for AFR management. Well, there was disclosure at the bottom of the column online at the AFR‘s website, but not in this morning’s edition of the paper. — Glenn Dyer

ABC to commercial media’s rescue. The ABC will launch a pilot project to provide links to other news services alongside ABC stories, managing director Mark Scott will announce in a speech today (full text here). The pilot service is modelled on the BBC’s Newstracker, which use web search technology to aggregate content from other news websites relating to particular BBC stories.

“Since we’re not dependent on advertising or reader revenue at the ABC, we are happy to bring audiences in, then lead them to other areas of interest, including beyond ABC sites,” Scott will tell the American Chamber of Commerce. “If our service is valuable, they’ll come back. We already do this through our social media accounts and are now investigating how to do this in a more structured way.” Scott says the pilot project, to launch later this year, shows the ABC wants to be part of a “thriving media ecology” in Australia. — Matthew Knott

Letters of the day. A letter in extremely poor taste in the Sunshine Coast Daily today, following up a story from yesterday on an unfortunate accident …

… but then, the paper also ran this letter today: 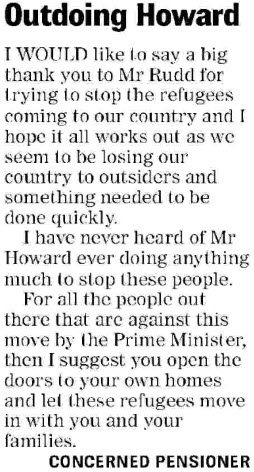 Video of the day. Our intrepid film geek Luke Buckmaster (of Crikey blog Cinetology) has conducted what he claims — probably quite rightly — to be the world’s first media interview in a 4D cinema. We’ll take his word for it. Either way, this chat with Shaun of the Dead and The World’s End director Edgar Wright is four kinds of fun … 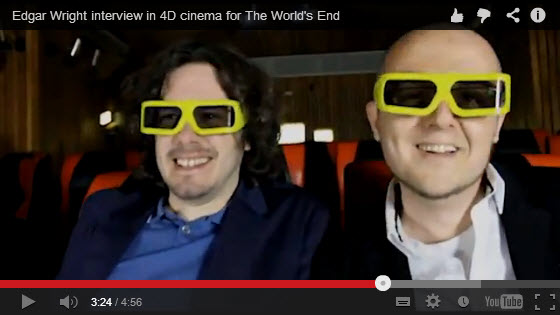 Front page of the day. Rupert Murdoch is weighing into the colourful debate on NYC mayor hopeful Anthony Weiner, who has been pinged — again — for sending lewd texts.

Interesting to see a glimpse of Murdoch’s opprobrium of Weiner — the man who has probably sold more of Murdoch’s papers than anyone else in recent times. Weiner delivers again for the New York Post today … 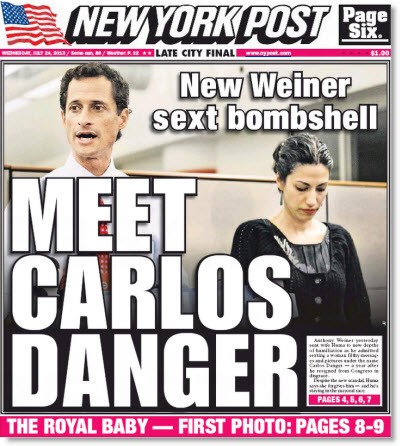 A picture paints a thousand words – but for one sicko to be slagging off another?
How long did Murdoch’s photographer have to wait, or take how many pictures, to get Weiner’s wife looking “right”?

And the ABC in natural progression – enough of their own hacks already parrot Murdoch without question.

…. but are you sure Scott didn’t describe that media ecology as “conniving”?

Murdoch describes Weiner as “a sicko” – but apparently it’s fine to distribute crass, embarrassing and revealing photos of other people via a publishing empire. At least Weiner doesn’t base his livelihood on smut.