Holiday in Cambodia: a leader returns to fuel unrealistic hope

For the first time since 1979, there is a real feeling in Cambodia that dictator Hun Sen can be thrown out. 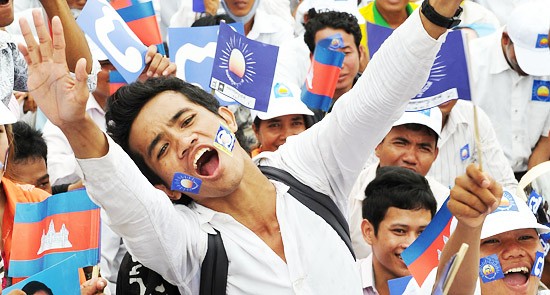 It’s been impossible to escape the loudspeaker-driven hubbub of wildly enthusiastic electioneering across one of south-east Asia’s two economically forgotten nations this week.

Among the shrieking and flag waving of the mostly youthful populace of Cambodia was a mixture of hope and fear. With two-thirds of the country under 30 there’s been a certain party atmosphere of simple, relentless chanting demanding “change” and “win” amid the delirious waving of flags by a crowd decked out in hats and shirts emblazoned with the “sunrise” logo of the Cambodian National Rescue Party. The united opposition front, the biggest effort in decades to unseat iron-fisted 60-year-old Prime Minister Hun Sen in decades, was formed through the Sam Rainsy Party, headed by the veteran one-time finance minister who has long been a favourite of the West, and the Human Rights Party, headed by Kem Sokha.

Last Friday, Phnom Penh was gripped by an unprecedented public outpouring of excitement that was unmatched since a Vietnamese-backed splinter group of the ruling, genocidal Khmer Rouge seized the country back from its maniac dictator Saloth Sar (known by his infamous non de guerre Pol Pot) in 1979. The event was the return, after four years, of self-exiled opposition leader Sam Rainsy following a pardon the previous week for crimes that have been widely acknowledged to have been politically motivated.

The 1979 invasion installed a young and cunning cadre Hun Sen, now Asia’s longest serving PM at 28 years and counting. He has a fig leaf of a monarchy to legitimise a dictatorship he is actively attempting to turn into a China-backed political dynasty that has modern precedence only in North Korea. He has said he plans to rule into his 70s and is installing family members in parliament, including his youngest son. His two elder charge are deputies in charge of, in order of age, the elite national guard and Cambodian Intelligence.

Rainsy’s return has triggered a wave of probably unrealistic hope across the nation. An adoring crowd of 100,000 or more descended on Phnom Penh — only nine days ahead of the election, held every five years. Despite its out-sized natural endowments — it’s a massive fertile river plain abundant with water, a plentiful ocean front and an eminently sustainable population of 15 million — Cambodia is home to the poorest people in the region, with a GDP per head of just $800 per year. Smart, educated people in the country’s big cities earn just $100-$150 each month.

By yesterday, Rainsy had made it to Siem Reap, the fast-growing but shabby town near Angkor Wat, on his whistlestop provincial tour, where he has been met with good crowds — but this one was tens of thousands strong. With his straight back, serene repose, glasses and donnish air, Rainsy appears as a mix of monk and headmaster: firm but fair. And while his management style has been critiqued, he’s a stayer, remaining unflappable and drip-dry after four hours aback a truck in beating heat. His coalition partner Kem Sokha was sweating, hoarse and wilting in the steamy air as they addressed the raucous crowd outside Angkor Wat itself.

Rainsy’s return may have lifted hopes of a nation that is seeing its future slip away before its eyes. But there are plenty of smoke and mirrors involved in his ostensibly triumphant return. Try this for starters: he’s not actually allowed to run for election. The National Election Commission — controlled like all the nation’s “independent institutions” by Hun and his cronies — said that Rainsy could not compete in the election, despite his pardon, as he would need to reregister as a voter — that registration period had passed and he would have to wait until later in the year when registrations were opened again.

“I am a lawmaker and I already had my name on the voting list, though the NEC deleted my name due to the court’s verdicts, and on July 12 the King pardoned me,” Rainsy said in a follow-up letter on Tuesday. Like many places in Asia, including China, Cambodia likes to pay lip service to the rule of law — but it is simply that.

Pol Pot’s eradication of about one-quarter of the country’s citizens via torture, murder, starvation and often simply working them to death was the low point in a country where the bar had been set close to the ground after its desultory occupation by the French, multiple invasions by its neighbours Vietnam and Thailand and carpet-bombing by the US during the Vietnam War, in one of its failed attempts to cut Vietnamese supply lines. The region’s other forgotten nation, Laos, got an even bigger carpet, but its people are now better off.

Cambodia has only in relatively recent years popped up on the “Western” radar, apart from all but the most dedicated backpackers as one of south-east Asia’s alluring, cheap tourist destinations. It is home of the ancient jungle temples of Angkor Wat, which would make any world list of top 10 monuments, and its south coast beaches, in particularly Sihanoukville, have become the latest addition to international backpacker party trail.

Its neighbours and the US are variously on the nose. Vietnam is easily the most loathed, with its illegal land concessions handed over by Hun’s administration and illegal immigrants — some estimate as many as 1 million. So guess who has not-so-quietly slipped into town? Resurgent superpower and developing nation ATM China has emerged as the country’s main financial backer. Still, there are plenty of locals who will tell you it was China that funded the Khmer Rouge, until, like its other insane ally North Korea, it slipped from control.

Cambodia is also an advertisement for the anti-aid lobby, although there are some terrific projects, and Australia has become very targeted with its $93 million-a-year aid budget focusing on justice, health and education issues.

But one young local I spoke to, who had won a scholarship provided by Australia to go to college in Phnom Penh, spoke of the pressures from the ruling party to join in his rural village when he returned to build a much-needed school. He said the profits made by the NGO he works for — on different projects — goes straight back into the pocket of the guy who runs it.

While Hun is all but sure to win the election — some form of coalition is a remote chance — there is already a tug-o-war for Cambodia’s bounty between Vietnam, the old enemy, and China, its new “friend”. As the US “pivots” towards Asia hopefully it will care a bit more too and countries like Australia will step up efforts to guide Cambodia’s leaders down a better path, one that will allow Cambodians to live in more freedom and dignity than they are currently afforded.

Thanks for that Michael.
Both fascinating and more than a bit depressing.

What did you do to this, Sir, that it was so dull that nobody actually read it all. Paddy. Don’t like it if you didn’t get through it. You are encouraging the kind of journalism that sends a person to drink. I have had to have a beer.

I am sorry but it is “dreadful”.