Ben Riley, a rising star in the Young Liberals, has been controversially suspended for six months for pinching a pair of RM Williams boots at a party convention. The swift punishment has exposed party tensions.

A rising star of Queensland’s Liberal National Party has been controversially suspended for pinching a pair of RM Williams boots, as tensions between the party’s young Turks and old guard come to a head.

Ben Riley, president of the Young LNP (and campaigns director of the national Young Liberals), was suspended from the party for six months following the incident late on Friday night.

The venue was the LNP Convention at the RNA Showgrounds in Brisbane. According to a party insider, speaking on condition of anonymity, Riley took a pair of RM Williams boots from a store set up at the convention. “He’s joking around on Friday evening, he’s put on a pair of boots, they’re pretty much like clown shoes — three sizes too big,” the source said. Riley proceeded to wear them around and spilt beer on them.

The source said that on Saturday, Riley awoke filled with remorse and offered to pay for the boots, but the LNP executive decided to suspend him for six months (there was a push to expel him from the party altogether). 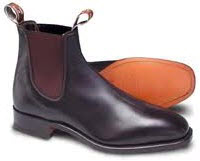 Crikey’s source said some members thought the punishment was a “drastic overreaction”, and thought LNP forces hostile to Riley were looking for any excuse to “clip the wings” of the Young LNP. “It’s a bloke having a bit of fun at a convention,” the source said.

However, another LNP member saw the incident in a more serious light: as stealing. The source told Crikey that Riley “narrowly avoided expulsion … he got off with a suspension after some of his MP mates pressured HQ and [LNP President] Bruce McIver for him not to be expelled. Many saw this is a perfect opportunity to finally rid the LNP of Mr Riley.”

The back story is that there is friction in the LNP — which was formed in 2008 — between some Young LNP members and the influential rump of the president’s committee, the fiefdom of McIver. McIver, a trucking magnate, was a driving force behind the amalgamation of the Liberal and National parties and has been president since the LNP was formed. McIver may not have been the key figure pushing for Riley to be expelled or suspended, but it’s likely he acquisced.

Some in the party are comparing the swift penalty handed down to Riley to the treatment of ex-LNP life member Clive Palmer. Palmer was highly critical of the LNP government in Queensland, claiming publicly that Treasurer Tim Nicholls was “detestable” and had “cooked the books” to excuse asset sales. Palmer was suspended from the party for this in November 2012, but was reinstated two weeks later (he then quit of his own accord).

A LNP spokesperson confirmed Riley had been suspended for six months and “it does involve a pair of RM Williams”. He declined to answer further questions.

Riley was uncontactable for this story. It’s understood he intends to lie low and wait for his suspension to expire. It’s not known where the ill-fated boots are now.

Riley’s penchant for RM Williams boots is not surprising. The Coalition has a soft spot for the footwear, which is Australian-made (though not entirely Australian-owned) and regularly features in Coalition MPs’ outfits, often teamed with moleskins. Barnaby Joyce presented his colleagues with a mounted pair of his worn RM Williams boots, to be handed on to the next Nationals Senate leader, when he prepared to leave the Senate last month. Opposition Leader Tony Abbott, a fan of elastic-sided footwear, informed Parliament in May that he was wearing RM Williams boots, while Kevin Rudd wore RM Williams to meet US President Barack Obama.

Sounds like the LNP fuddy duddies can’t take a joke to me. What’s more Queenslander than spilling beers on your RM Williams?

Common problem with LNP squatocrats, what is taken as their right out in the boonies doesn’t play so well in town.

Interesting contrast to Mary-Jo Fisher’s treatment. Riley must have upset some important people to be dealt with so harshly.

Blundstones, now there was a boot.