Is Ian Hanke using a nom de plume? ... jobs going at Education Services Australia ... inside scoop on the Lalor preselection

Hanke not a pseudonym. Has Essendon and Liberal spin doctor Ian Hanke been caught posting as an anonymous “voice of reason” called Hawker83 on behalf of Essendon on AFL forum Big Footy? That’s what user DudleyB claimed last night on Big Footy, in a post that’s gone viral:

“You have constantly defended the Bombers — but AMAZINGLY everything you have said seems to pre-date the media releases and comments coming out of Essendon by a few days — the includes arguments (your argument changes about once a week on average) — right down to your use and choice of words .

I noticed you used the words ‘half truths, leaks and innuendos’ on SEVERAL occasions last week and then hey presto these words roll out your client James mouth a few days later.

I’m guessing you’re either Ian Hanke or an associate of his. Your general demeanour is almost identical to Hanke’s Twitter feed.

I also notice you made no posts for a week — the same week Ian Hanke said he was in East Timor on business on his twitter Account.”

It piqued our interest. Except, there’s been a blanket denial from Hanke this morning. 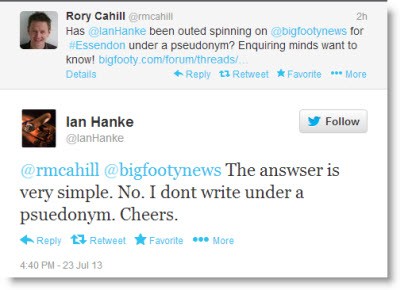 That settles it. And gives us cause to remember his recent ukulele performance at Lina’s wine bar in Melbourne, where Hanke performed composer John Cage’s seminal work 4’33” (a “musical piece” that consists of four minutes and 33 seconds of silence). Tips was there to witness the event, and trust us, if he didn’t use a pseudonym for that performance, we believe him when he says he doesn’t write under one.

It does, however, leave open the chance that someone else involved with Essendon could be behind the posts … Know anything? Drop us a line …

Sackwatch. Education Services Australia Ltd (formerly Curriculum Corporation), a ministerial company governed by all state, federal and non-government education jurisdictions, confirmed around 25 of its permanent staff have just been made redundant. That makes up around 10% of its total staff. ESA’s recent high-profile projects including ABC Splash, the ATO’s Tax, Super + You education package, the just-launched flagship Language Learning Space, the popular Australian Screen Online site and millions of dollars of projects supporting the implementation of the new national curriculum. A spokesperson told Crikey that since it’s a project-based organisation, staff numbers could easily ebb and flow. Know of any other large-scale redundancies? Let us know …

Lalor rank and file bite back. An anonymous Labor insider spills on preselection for Julia Gillard’s old seat of Lalor:

“The truth is it was all predetermined and rigged. No-one else had a chance at getting that local member vote. It is all run by factions left and right and they had agreed and did a deal to vote for [Joanne] Ryan. The other candidates Julie Anne Evans and Brian Dunn had no chance.

“The voting was held at Julia Gillard’s office where the officials and staff running the ballot had their job security as a vested interest — they had guaranteed jobs with Ryan and they were all on the voter list. They were there sitting with Ryan and serving her coffee and chatting all day long. Also some Spanish guy who looks after the Spanish-speaking members were all told to vote for Ryan. When they arrived he came out of the office, spoke in Spanish to them (kisses and hugs) as well as Ryan and was telling them how to vote and thrusting Ryan’s how to vote card in their hand. He would then walk with them into the voting centre. Voters were also being talked to inside the office by this man and he was talking in Spanish to them. It’s not fair — Evans and Dunn had the guts to still turn up [Crikey: but not to last night’s public office selection committee meeting], but they were not welcome. The fact that Ms Evans still managed to pull 9% of votes is amazing. Well ahead of Mr Dunn at 4% who is a long serving member of the actual branch … What happened at Lalor was an absolute disgrace. Also Gillard sent an email to all the voters encouraging them to vote for Ryan. I am sure that this influenced the vote — well I in fact know that that is a major reason behind the vote. So basically just rubber stamping …”

Naming the royal babby. Yesterday we called on Crikey readers to name the squishy-faced king-to-be — since, frankly, we reckon there must be better options than George, James or Philip.

And the suggestions have been flowing in, from the intriguing:

“Louis, after Prince Charles’ favourite great-uncle Lord Mountbatten, who was tragically killed in 1979 by an IRA bomb which had been planted in his yacht.”

“First Sovereign on the Moon?”

“Before Aethred the Unready was a great chappie called Sweyn Forkbeard, son of Sigrid the Haughty. So perhaps we could have Biggles Airmaster, son of William Helicopter and Kate the Winged One (daughter of a pilot and stewardess)”

“How about Prince Bruce in recognition that the kid will be the king of Australia and the Monty Python depiction of an Australian shearing shed back in the ’70s. Has to be better than George or other recycled royal names. Bring on the Republic of Australia and rid us of this bloody malaise that afflicts our nation.”

And then, to the sublime:

Surely even republicans would support John Goodman as king.

I have a theory that the royal family is trying to rehabilitate certain names. The next king will be Charles III – successor to two complete failures of the same name. After that we’ll have William V, who will have to do an awful lot to make up for the great nonentities who have carried that name. The other obvious candidates for redemption are Edward or (less likely) John.