Jonathan Marshall, the journalist who recorded Alan Jones' infamous "died of shame" speech, has re-emerged as guest editor of a free Sydney newspaper. That and other media tidbits.

ABC increases pay offer. The ABC will today announce what it says is its final pay offer for its 4000+ staff: an average 2.52% per annum increase over three years. That’s an increase on Aunty’s previous offer of 2% a year — a number rejected by the unions representing ABC workers on the basis it represented a real wages cut. The ABC’s latest Enterprise Agreement offer includes a:

Michael Tull, national president of the Community and Public Sector Union, told Crikey: “It is a significantly improved offer and as much as the ABC is saying that it’s their final offer, it’s not over yet. We will be taking it to members over the next week to get some feedback and we will then go back to management to convey how staff feel about the offer.” The wage negotiations turned testy last month when the ABC’s Media, Entertainment and Arts Alliance house committee called in economics correspondent Stephen Long to fact-check ABC management’s claims about the generosity of their offer. — Matthew Knott

‘Died of shame’ journo back in action. The Kiwi journalist who broke the Alan Jones “died of shame” story has emerged from hibernation to redesign a Sydney community newspaper and write investigations for Cleo magazine. Jonathan Marshall, who left News Corp Australia in May after Media Watch exposed him secretly filming an interviewee, edited this month’s edition of Latte Life, a free paper for residents of the glitzy Sydney suburb of Double Bay.

The front page features an exclusive story on a “controversial” Double Bay shop peddling fake designer fashion and a piece on the dangers of waiters carrying food across a busy road. The edition also features an interview with Jamie Fawcett, the paparazzo who brokered the Pauline Hanson nude pics deal and was labelled Sydney’s “most disliked freelance photographer” by The Sun-Herald. 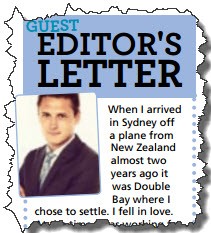 In his editor’s note Marshall describes Fawcett as someone he has a “a great deal of respect and admiration for” and as “one of the most focussed, motivated and clever people I know”.

Marshall told Crikey he has an ongoing role at the family-owned paper, which prints 40,000 copies a month, overhauling its design and layout. “It’s a really exciting thing to be at the helm of something and shape the direction,” he said. “It’s massively exciting.”

Journalist Damien Murphy detailed the maverick’s colourful career — which has included taking a fake gun and knife on a plane — in a cutting piece for Fairfax last year. — Matthew Knott

Man Booker celebrates diversity. Last night in the UK, there was an announcement of a more bookish kind than the royal ones we’ve been inundated with coverage of: the longlist for the 45th annual Man Booker Prize for Fiction. “This is surely the most diverse longlist in Man Booker history, wonderfully various in terms of geography, form, length and subject,” chair of judges Robert Macfarlane said upon the announcement. “These … outstanding novels range from the traditional to the experimental, from the first century AD to the present day, from 100 pages to 1000 and from Shanghai to Hendon.”

There are 13 works on the longlist selected from 151 titles, with authors from Britain, Zimbabwe, New Zealand, Canada, Malaysia and Ireland. As with last year’s Man Booker, no Australian novelists made it to the longlist this year. Over half the longlisted works are from female authors (seven novels by women, six by men), while three debut novelists are among the titles. — Bethanie Blanchard (read the rest of this article at Liticism)

Front page of the day. The Daily Mail set itself apart from the pack by featuring Prince Charles — rather than Wills and Kate — on its front page celebrating the royal birth … 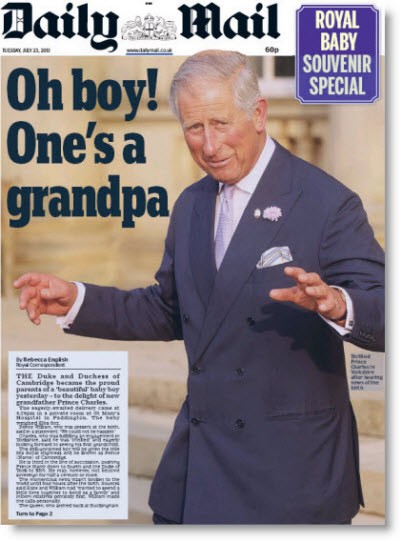