James Packer and Lachlan Murdoch dance on the grave of Fairfax while its newspapers fail to properly scrutinise their power and influence. The recent story of Fairfax is one of independence cut short. 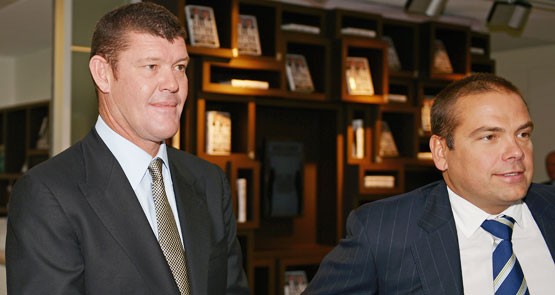 The Australian Financial Review‘s editor-at-large, Pam Williams, is to be commended for producing Killing Fairfax. Not since The Latham Diaries came out in 2005 has a book delivered so many scoops, insights and revelations into how power is wielded in Australia. Never before have so many powerful Australian media players opened up their lives for one publishing venture.

Amid a treasure trove of gems, my favourite was Ron Walker’s letter to James Packer complaining about the billionaire getting him in a head-lock as he was about to greet the Queen at the opening ceremony of the Melbourne Commonwealth Games in 2006. Naughty Ron had failed to bow at the feet of his old Packer mates by not committing Fairfax shareholders to pay an excessive $520 million for PBL’s New Zealand magazines.

Killing Fairfax provides a fascinating take on the personalities involved and a largely factual account of the deals and business trends in Australian media over the past 20 years. However, it is also most unfortunate that Williams, a Fairfax veteran, has allowed herself to be used by Australia’s self-serving and thuggish media oligarchs for what they regard as a seminal propaganda victory over a mortal enemy.

James Packer and Lachlan Murdoch will come to regret the vengeful hubris on display in the book and at yesterday’s launch in Sydney. They brazenly celebrate the financial battles faced by a venerable media institution that  dared to fearlessly cover and sometimes criticise the excesses, power and ethics of their families.

While Alan Kohler will also lose journalistic cachet after associating himself with the exercise courtesy of launching the book yesterday, he has written a factual account of Fairfax’s journey for the News Corporation-owned Business Spectator website this morning.

The key lesson for Fairfax shareholders is the need to have genuinely independent directors who are skilled up in the media industry and dedicated to resisting the self-serving requests coming from the Packer and Murdoch camps.

How on earth did long-time Murdoch family adviser Mark Burrowes get himself on the Fairfax board? He should have been railing against the ridiculous $1.1 billion that Fairfax paid to buy News Corp’s New Zealand print operations in 2003. Similarly, how on earth did Fairfax end up with three directors — Dean Wills, David Gonski and Fred Hilmer — in common with shopping centre giant Westfield, which is controlled by the Lowy family who are on very friendly terms with the Packers? Given Gonksi was a long-time adviser to the Packer family and ended up as joint executor of Kerry Packer’ will, he just shouldn’t have been appointed to the Fairfax board in 1993, shortly after it was refloated by Conrad Black.

It was Gonski, Wills and former PBL CEO turned Fairfax chairman Brian Powers who drove the appointment of Fred Hilmer in 1998 and he, more than anyone else, botched the chess playing as Seek, REA Group and CarSales evolved over the next few years.

The so-called Westfield faction also erred by allowing colourful property developer and record-breaking Liberal Party fundraiser Ron Walker onto the Fairfax board in 2002. Two other key supporters of James Packer, Margaret Jackson and Roger Corbett, were appointed on the same day.

The absolute first criteria of any Fairfax director should be that they are completely independent of any association or sympathy with its billionaire competitors which have long aspired to shackle its journalism and destroy its business. Corbett’s tenure as Fairfax chairman must surely be under serious scrutiny now given the woeful performance of Fairfax under his leadership, not to mention his pathetically small shareholding after a decade on the board.

And what on earth is current CEO Greg Hywood doing consorting with Packer so obligingly, to the extent that Williams discloses on page 304 of Killing Fairfax that “they planned to ski together in Aspen in the new year of 2013”? Can’t wait for a shareholder to ask about that one at the upcoming Fairfax AGM.

If Fairfax Media had a genuinely independent board now, both Hywood and Corbett would be in a world of trouble for their consorting with Packer, especially after yesterday’s performances.

Ever since Lachlan Murdoch and James Packer went into business together in late 2007 to firstly try and privatise Consolidated Media Holdings and later to control Ten Network Holdings, Australia’s two most powerful families have had an unholy “keep off the grass” agreement which includes manipulating media outlets to ensure minimal criticism of both families.

Look no further than the pathetic coverage by The Daily Telegraph and The Australian on the crony capitalism on display around Crown Ltd and the obsequious O’Farrell government.

Any newspaper worth its salt would be embarking on a vigorous debate about gambling, harbour-front development, tendering processes, political cronyism and the like, but instead you just get a cheer squad of News Corp journalists calling the play like a football match with winners and losers, as opposed to exploring the broader public interest questions.

Here’s hoping Williams’ book will inadvertently blow the whistle on the underbelly of Australian media and fire up those who genuinely believe in independent public interest journalism to reject the Fairfax grave-dancing performances by the boy billionaires yesterday.

And that includes Fairfax editors doing what they do best: fearlessly taking on the rich and powerful regardless of what their CEO or directors think.

What you see on display in the goofy gravedancing of Packer, the awful performance of Corbett and Hywood and the behaviour of Williams as a Fairfax writer is the diseases that have eroded Fairfax. The enemies got in close with the ALP in Hawke and Keatings’ time and Fairfax was locked out in the cold. The leadership has been characterised by self-interest and ego rather than management talent. The editorial staff have been unmanaged, with too many of them running their own agenda. Add the three together and you get a company on the brink of the cliff.

This is a rerun of Gerald Stone’s Who Killed Channel Nine. The sycophantic nepotism within the media is extraordinary in a democracy that views free speech as a right. Free speech is Ok so long as it does not involve us and our families. The sort of super injunctions to ” protect” the Rich and Famous in the UK. Cross media ownership is a myth really as cross directorships and close relationships render the concept futile as a measure of protection of the Public Interest.
The cross infiltration is rife where for example in Adelaide the news room journalists work for News Ltd – so much for an independent viewpoint on state issues – for national issues then Radio National is a must for balance and a lack of Murdoch induced bias.

Fairfax has been a basket case since since the days if Warwick and his grandiose ideas to those of Conrad Black.
The successful introduction of the Guardian will encourage other quality papers such as the NYT and break the smug duopoly of vested interest.

All now have pay walls – circulation and subscriptions are falling – the level of journalism is in the sewer. They cannot even give the papers away judging by the carpet of Sun Heralds’ and Telegraphs’ that littered the streets at Docklands and Olympic Stadium at the recent Lions rugby tests.

Stephen, if only you had not included the word “independent” Crikey.com was the only place I perceived in your past there to be any independence. I know I am not the sharpest knife in the draw. But I agree with the person who first said “News” is anything someone dose not want published! So called independent media is all about access to government chook feed.. I am still a subscriber because I am living in your past! Edward James

Oh dear me, What makes journalism so different to somehow be excluded from being manipulated, bought, hired or even duped to the directions of the powerful?

With the AFR now owned and operated by the same big businesses it used to keep “honest”, and any credibility the Australian had destroyed by the current editor & partisan churnalists, they are creating a pathetic pretend america more and more each day. In these two idiot savants, (sans the savant) we have our own self interested, financially bottomless, greedy Koch Brothers. They have not earned dollar one and lost a shatload through incompetence, stupidity greed and ignorance & now these are trying to rewrite history via their own media and the political parties and leaders they have bought. What chance hacking and blackmails here? odds on I would reckon. wonder if packer will give me odds?