Democracy ends here. It’s been a bit quieter at the planned McDonald’s site at Tecoma in the Dandenongs east of Melbourne after Supreme Court beak Emilios Kyros slapped protesters with a wide-ranging “go away” order last week. Some wily stencil artists have acted on the judge’s command, helpfully assisting McDissidents unsure of where they’re allowed — and not allowed — to venture. 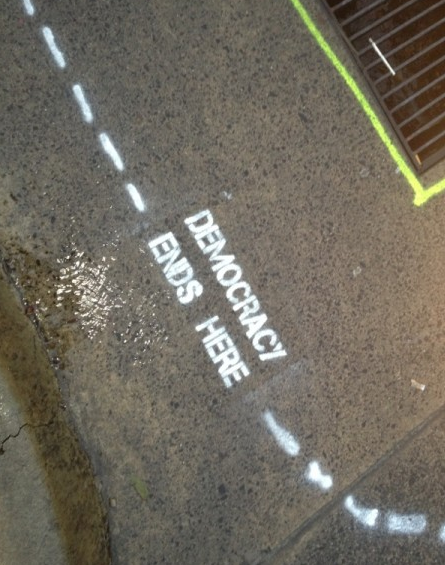 Labor not battle-ready in Qld? This from an anonymous source on Kevin Rudd in his home state, as Labor prepares to call the election:

“Seems Kevin Rudd wishes he started with intervention in Brisbane after his weeklong Queensland campaign. Queensland hasn’t had a hassle-free preselection yet with the PM expressing concern at factional dealing over federal seats, the quality of candidates and productivity of their campaigns.”

Our source reckons there was some trouble over preselection in the seat of Capricornia, north of Brisbane, where the ALP sitting member is retiring.

“By the time the [Rudd] circus rolled into town things were so muddled between the campaign and PMO that they didn’t know if they were coming or going. The PM didn’t even stick around at the prescribed fundraiser but moved on to friendlier territory in Flynn. They may have all but settled Rankin but previous sins are coming back with a vengeance up north.”

Crikey would love a spot of gossip from the Liberal and Green camps, too. Insiders can send us a little anonymous tip …

Name the baby comp. The new royal heir is here — you probably picked that up during the deluge of media coverage on it over the past 20 hours — and he’ll need a name. The punters’ favourite — Alexandra — no longer seems quite right. Aussie punters are backing George, then James, then Alexander. Kevin makes the list at $101, with Wayne on longer odds at $271. Money has been bet on Barack, and you can have a flutter on the name Hashtag.

With so many options to choose from, Crikey is keen to help Kate and Wills pick one out — with your help. Email us your suggestions, and we’ll bring you the best tomorrow. The Crikey bunker humbly suggests Jasper, as a tribute to our much-loved, and sadly late, former first cat. We would also like to nominate Malcolm — if Australia avoids ever having this baby as its king, Malcolm will have something to do with it — and Joffrey. Also Ashton, whom the Poms have been admiring at the crease lately.

The winner is encouraged to assemble one of these royal baby celebratory cocktails, via Slate:

Supermarket goss. Tips has been nosing around what goes on at our supermarket tills. Yesterday we brought you a tip about Woolworths — that the company has cut back on casual check-out workers, forcing management to jump on the tills more frequently, and leading to more being tills closed and longer queues. The company got back to us to say this:

“There has been only a negligible change in casual employment. Many people begin their career with Woolworths in casual positions and its very normal for those wanting to pursue a future with us to transition into permanent positions. There has been very little change in the number of casual staff employed at Woolworths … if there is a spike in people waiting at the checkouts will we do everything we can to save them time, including calling in staff from other departments to help.”

We also heard from a reader who passed on this interesting YouTube clip on the optimal level of open tills in a supermarket — and why your queue usually seems to be moving the slowest. Tips enjoyed it, although we’re not convinced about the alternative of having one long queue. Surely the time saved in minimising check-out delays would be counterbalanced by the hassle of wheeling your trolley through a long, fast-moving single queue?

In my local Woolies the staff that should be at the checkouts are clogging up just about every aisle restocking.

Re supermarket queues: Many non-supermarket outlets such as Big W, Target, and Subway (as well as airport check-ins, last time I travelled), use the single-queue system. But their success depends on having sufficient numbers of staff to keep the line of customers moving. Woolworths tends not to do this, with 1 or none of a possible 18 check-outs staffed in the evening and 1 staff member supervising the (always slow-moving) 5 self-checkout stations. There has never been any effort to supplement this when queues are long and customers are clearly exasperated. I have frequently been told that ‘there are no staff available.’