Feral protesters, horrendous traffic and the riot police: whose stupid idea was it to have the Labor caucus meeting in Balmain of all places? Crikey's Sydney correspondent jostled with the press pack. 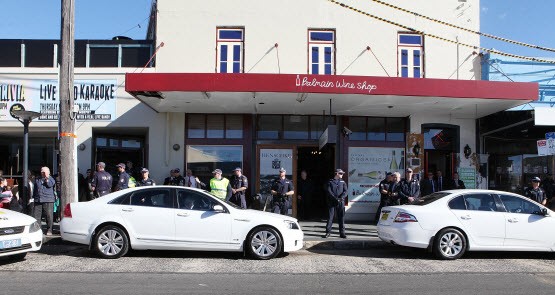 Kevin Rudd came to Balmain yesterday, and quite frankly it was a debacle. Note to the ALP: next time you organise a stunt involving 100 politicians, 60 police, one fully armed riot squad, several groups of feral protesters and 4000 TV cameras, could you not do it in a suburb with one main road? At 8.30am, just before school starts? Did anyone think that through?

By the time I’d battled my way from school drop-off to the Balmain Town Hall, it sounded like a full-scale riot was under way. Large contingents of protesters — from both ends of the political spectrum — were taking it in turns to bellow through loudspeakers and dozens of police blocked off the footpaths, while the riot squad attempted to keep the peace. When Rudd finally turned up at 9.30am, the noise reached such a crescendo you could probably have heard it in Canberra. By this stage, whoever had suggested Balmain as a fabulous venue for  a special caucus meeting was probably out the back being flogged.

Actually, having the meeting in Balmain, on the grounds that the party was born there in 1891, was always a dumb look. Although men in blue singlets may have once roamed the streets, it now has a higher household income than Vaucluse and more Audi 4WDs than Mosman. The Liberal vote is steadily rising, with the Greens finishing a strong third in recent years and polling 23.8% in 2010. According to ABC election guru Antony Green, the strong support for the Liberals has “made it difficult for the Greens to pass the Liberal first preference vote, meaning the seat continues to appear as safe for Labor thanks to Green preferences”.

Which could explain why, traffic issues aside, the natives were not as friendly to Rudd as he had probably expected.

By the time the caucus members started to leave the Town Hall at about 1pm, the crowd went feral, sending the riot police into overdrive. As Labor MPs Stephen Smith and Stephen Conroy, evidently dissenters to the new regime, scurried to their Comcars, the police formed an unbroken blue line, aiding their escape. Eventually, the large media contingent was ushered upstairs to the Town Hall to hear the sermon delivered by Rudd, flanked by Labor frontbenchers Anthony Albanese, Penny Wong and Jacinta Collins.

After it was over, Rudd and Albo, flanked by local Labor member Tanya Plibersek and several security guards, walked about 200 meters down the road to have lunch at the Unity Hall Hotel with some of the local Balmain branch members.

Although the pub technically spawned the ALP, these days it is owned by a more modern member of the Labor family — John Singleton. On the grounds that rich people can impose their atrocious taste on whomever they like, he has renovated the hotel to include a “Workers’ Bar”, which is rather like a smallish, cheaply lit version of an ALP theme park. Various Labor Party election slogans — “It’s Time”, etc — are painted on the walls, which are also covered with black-and-white photos of Labor leaders like  Bob Hawke, Gough Whitlam and Neville Wran.

At the back of the bar is a series of smaller private rooms with their own themed decorations, including photos of the Balmain Tigers rugby league team (back when Balmain could actually field a team), and a whole room devoted to Balmain swimming legend — and mate of Singo’s — Dawn Fraser.

During the press conference it had struck me that Rudd and Albo, not known for their sartorial style, were looking unusually well-groomed. Both men were sporting dark blue suits that actually looked like they fit, very crisp white shirts and bright red ties. Later I learned, these new outfits had been put to good use. In the Dawn Fraser room a blue backdrop was pinned up, hair and make up artists were enlisted, and several professional photos of the PM and Deputy PM were taken.

So if Kevin Rudd is going to travel all the way to Balmain to have his photo taken in the Workers’ Bar, doesn’t that point to only one thing? Surely, this means that he is about to call an election. Please God, let it be soon.

Did they serve whine? Sounds like sour whine to me & lots of it.

I prefer to let my hair down in the “Faceless Men Dungeon”.

Thanks for that archetypal Sydney analysis of the caucus meeting – ‘disaster’ meaning anything that creates traffic.

True, traffic is to Sydney what asylum seekers are to the Liberal Party: cause for panic followed by anger and deep desire for vengeance. But, perhaps you could have analysed the day through a more relevant prism than the effect of a few Com cars clogging our streets?

On that note, you should also probably have mentioned that the electoral analysis you offer is for the seat of Sydney – which takes in a lot more geography than just Balmain. The state seat is a more relevant indicator of local political preference – last election a virtual dead heat between the ALP / Lib / Greens. Same at Leichhardt Council level – 4 councillors from each party.

Lots of Comcars for a party function? Did they pay FBT?

I was puzzled by the choice of Balmain too, until I walked past (actually by accident) around 8.45am. I noticed the grey-haired activists starting to assemble and the Greens Party veterans scurrying along Darling St, all grim-faced and severe. Along with the Socialist Alliance, they played their part brilliantly, doing exactly what the ALP strategists wanted.

The only place better than Balmain for this sort of TV footage would have been Albo’s electorate of Marrickville. But there, most of the protesters would have been at work. Balmain, it was priceless… Well done.