James Packer and Lachlan Murdoch seemed to have plenty to talk about as they mingled at the Sydney launch of journalist Pamela Williams' book Killing Fairfax. And News Corp staff were everywhere ... 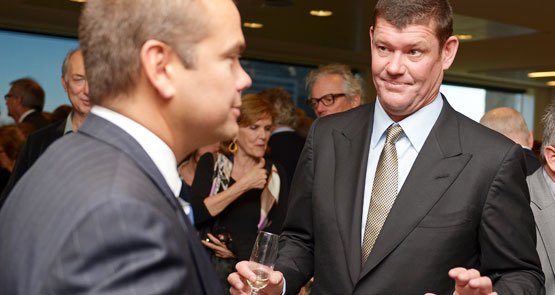 It was Kohler who in distant days hired Williams, the storyteller extraordinaire, at The Australian Financial Review back in 1987 (Williams joined from the ill-fated Michael Gill newspaper Business Daily). “She outlasted and outshone all of us … it was her consistency … the definitive piece you’d expect from her … the sort of details no one else gets,” Kohler said of both her published articles and her book.

Kohler said it was the board who ought take the blame for Fairfax’s plight. “The Fairfax board couldn’t see each other for the smoke … and couldn’t even smell it,” the ABC commentator and now News Corp employee said in reference to the business maxim that company boards must see the smoke coming under the boardroom door.

It was as Sydney as it could be, though sans Singo, Fred and Gina of the “untamed long hair, diaphanous outfits and shining pearls” (Pam’s words). Everyone else had delayed their European summer sojourn — or had come back with tanned Ashes despondency — to partake in the HarperCollins event.

Rather than spend too much time looking through the thorough index on the 350 pages, the room’s eyes were transfixed on the grinning duo, Packer and Murdoch. They had not only collaborated prior to the launch for the book’s cover photograph by Steve Baccon, but it’s emerged they even had Williams to Rockpool from whence the book’s title emerged after a vodka toast.

Described by HarperCollins chief James Kellow as brave and brilliant, Williams began at Fairfax’s AFR in August 1987 — the same day young Warwick turned up for his go at destroying the joint.

“… the room’s eyes were transfixed on the grinning duo, Packer and Murdoch.”

Her insight on her employer company continued while on book leave, writing even until June this year, with her last acknowledged sourced entry being June 21 with an email from ex-Fairfax CEO Fred Hilmer.

Over the past near-year she’d had access to all the media players; the Murdochs (senior and junior), the Stokes (senior and junior). And all those budding entrepreneurs who made their fortune in the online space as they chopped up most of Fairfax’s classified revenue.

Missing was Greg Hywood, the current Fairfax boss, who conspiracists suggest doesn’t mind the book of faults being thrown at his many predecessors.

The book does point out Hywood apparently likes to ski Aspen with James Packer. Departing Fairfax executive Brett Clegg — who only recently came through the rotating door at Darling Park — was there, and gets a thankyou in the book. Fairfax backstop Sean Alymer’s name tag sat on the front desk; he was pre-occupied elsewhere.

There was a scattering of the new underclass, those Fairfax shareholder employees who free marketeer Fred Hilmer encouraged to pay up to the record $6.10 in March 2000 for FXJ shares. Trading today at 50 cents, the underclass almost wear their resentment proudly.

Kohler said Fairfax wasn’t dead: “It’s not a wake.” And Williams’ message was “Fairfax: long may she survive … she’s still standing tall”. Meanwhile the waiter from Bold Food told Crikey that “the champagne wasn’t a hit”. Seems it’s hard to juggle the book and the Blackberry as the business types search out the next big digital thing. Though Packer enjoyed his champers tipple.

Well, that saves time. Packer and Murdoch like it (a lot). Packer still blames Fairfax for One Tel.
Funny how Williams moves on to embrace the next winner isn’t it? (Remember when she was Kelty’s sidekick? Then Walker? Now, it seems, Packer/Murdoch?)

Was this article written for the Social Pages, or as news/comment? Less fluff and more content please.

It’s ironic that Hilmer was/is the big cheese at the AGSM, where presumably in their MBA program they teach exactly the kinds of things Hilmer should have done at Fairfax – i.e managing an organisation in a changing environment, responding to disruptive technologies etc. I guess Fred missed out on those lectures.

It also makes it pretty clear that the ONLY reason for doing an MBA is to network with other overly competitive types and brown nose ‘captains’ of industry who might make you rich. The evidence is pretty clear you’ll learn nothing about running a company.

Oh, and a tip for anyone doing an MBA via the Internet or any form of distance education – you’re wasting your money. If you get no networking, you’ve done your dough.

Yikes – I’ve just signed up to Crikey thinking I would get some real journalism, and you’re going to tell me what the women were wearing? Woe is me.

I suspect it’s a good book. That requires application and diligence and scepticism, something Williams notably lacked in late 2000 (and early 2001 when she was in New York, far from the action) when she happily recycled untruths about me.