Insert (NZ) heading here. Crikey understands there has been consternation at The Australian Financial Review over the accuracy of the paper’s headlines in recent weeks. The problem is that, to save money, the AFR’s subediting — including writing the headlines — is now being now being done factory-style in New Zealand. This has produced a number of misleading or inaccurate headlines about companies, which have forced some unhappy public companies to release statements to the Australian Stock Exchange clarifying the facts in the stories and headlines.

More bad news for journos. The rumours keep coming: both News Corp and Fairfax are preparing for another big round of cost-cutting, redundancies and downsizing. This comes on top of a series of redundancies across both companies in recent years. If you know more, drop us a line …

A tale of two Democrats. Tips suggested on Friday that the bitter internal division in the Australian Democrats might be on the way out, with the election of new national president Hayden Ostrom Brown. So naive, Tips! A reader pointed out there are two rival websites for the party — the website of the Brown faction (the top one in our graphic below), and the website of the Churchill faction (the bottom one).

Our tipster concluded thus: “It’s a real shame, though, because just looking at the difference between the two sites should tell you all you need to know about Churchill’s ability to run a political campaign”. But we do have to point out that the Brown faction’s website has many of its pictures on a psychedelic sideways tilt … neither camp is keeping the web designers honest, that’s for sure. 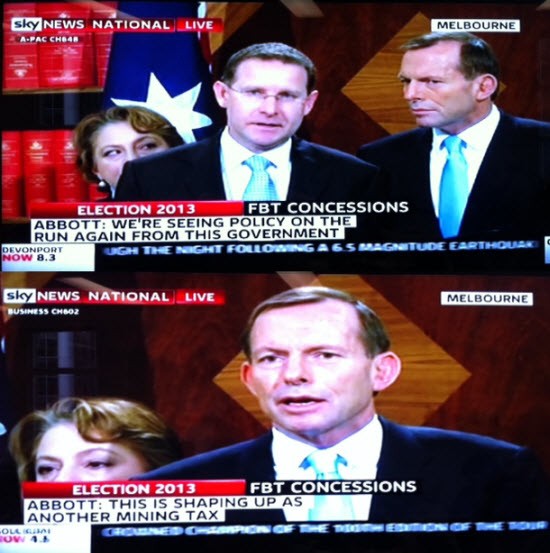 Yes, we get that Mirabella is on the short side, which makes it harder to sneak into shot without looking foolish. But pollies’ annoying habit of leering over each others’ shoulders for the camera — sometimes appearing to be superglued onto said shoulder — is odd, and it doesn’t always work. Memo to all of them: back off.

Supermarket gossip. Tips has been interested lately in what goes on behind the till at our supermarkets (and we’ve heard from a few readers fed up with what they say are longer queues). Sounds like the pressure is on at Woolies, if this mole is on the money:

“Woolworths has had the squeeze on ‘casual’ hours for a few years now, first they pushed everyone willing to go onto part-time/full-time who would go, then cut back the rosters to get rid of the largesse that is employing casual staff — largely ‘Uni students’ or people without a flexible schedule due to studies and such. The strategy now is each department’s manager is responsible for hitting wages targets however it takes — basically the manager and 2IC stick around for unpaid overtime — and where there’s a massive queue and such, supervisor staff and other department heads, including store manager, are paged to ‘jump on’ and clear out a backlog of customers. It’s been going on for a while now. I’m presuming each quarter or year the departments hit their wage targets they’re ratcheted in again, but it feels close to breaking point. Managers are already doing  too much overtime and are now being asked to ring up customers as needed. Customers get fed up of queueing up with most of the tills unoperated …”

We’ve put this to Woolworths and will keep you posted.

Re: Democrats. They both seem to be soliciting money. Where does it go? Is this legal?