The Rudd Solution passes political test, but can it pass policy test?

Kevin Rudd's PNG agreement on asylum seekers has so far worked politically, but whether it stops boat arrivals will become clearer soon. Will this pass the policy test? 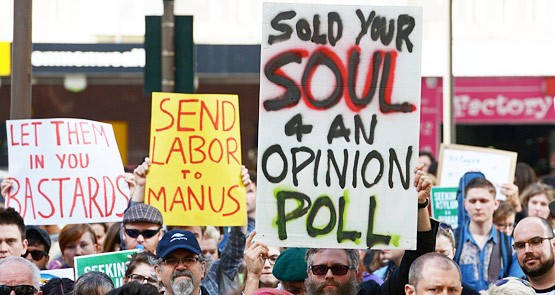 The first test of Kevin Rudd’s avowed “hardline” asylum seeker stance (for which he “made no apologies”, in case anyone was wondering if he was tempted to do so) was held on Friday evening, and it passed with flying colours. The Seven and Nine networks’ Sydney news bulletins — total local audience just under 700,000 — delivered the “no asylum seekers arriving by boat will be settled in Australia” message. Nine carried Greens Senators Christine Milne and Sarah Hanson-Young criticising the plan. Exactly what Labor would have wanted. Asylum seekers rioting on Nauru wouldn’t have hurt either.

The deal, announced on Friday afternoon, is for the Papua New Guinea government to resettle all maritime arrivals who arrive in Australia and are assessed as genuine refugees. There would be no chance for anyone who arrives by boat henceforth to be resettled in Australia. In return, Australia gives more aid to PNG.

The second test for the Rudd Solution came with the opposition’s reaction, and it passed again. Opposition Leader Tony Abbott initially backed the PNG agreement, but said Rudd couldn’t be trusted to deliver it; by the weekend the opposition was trying to unpick it, and criticising the ads that had suddenly bloomed in the nation’s media, ostensibly aimed at the “asylum seeker diaspora” here, but in reality aimed at marginal seat voters.

A characteristic — a puzzling one, given how long they had to prepare — of the opposition since Kevin Rudd returned has been an inability to maintain a consistent line of attack, one that addresses the specifics of a particular issue while linking to the opposition’s broader theme of what is wrong with Labor. At the moment, the specific attacks are all over the place and the broader theme is missing. Indeed, the opposition looks rattled, and so does Abbott, who keeps producing malapropisms. Last week he mysteriously spoke about Rudd “massaging the boats”.

Meantime, the Left marched, and issued condemnatory media releases, and pointed out what a terrible country PNG is, and called on the government to “let them all come”, all, again, exactly what Labor will want to demonstrate to swinging voters in metropolitan marginals that, finally, it has got the message on asylum seekers and is going to be more “hardline” than ever.

The agreement may well drive a couple of percentage points from Labor’s Left flank back to the Greens, whose vote has been slowly but consistently deflating since former leader Bob Brown handed over to Christine Milne, but that vote will simply flow back to Labor in nearly all of the 150 House of Reps seats, unless progressives decide to vote informal or preference the Coalition. Such straitjacketing is the great gift of compulsory voting and compulsory preferential voting for the major parties, albeit one on which compulsory voting advocates are peculiarly silent.

“If the Rudd Solution does work, it will mark a substantial step for Labor in neutering something that … has been electoral poison for over a decade.”

Whether the “hardline” stops people getting in boats and actually stops people dying, however, is a test that remains ahead.

By purporting to shut the door on all boat arrivals from this point, the government is looking to address the basic flaw in both the Howard and Gillard governments’ versions of the Pacific Solution, that asylum seekers reaching Australia by boat might be transferred for processing to an offshore facility, but they ultimately remained Australia’s responsibility and would have to eventually be resettled in Australia unless another country accepted them.

The Gillard government’s “Malaysian Solution” avoided this problem by consigning a small number of boat arrivals to Malaysia. After the Malaysian deal was struck down, the Gillard government tried to ameliorate the central flaw of the Pacific Solution by condemning people sent to Nauru to years of uncertainty, in the hope that would appear worse than the limbo of being in a refugee camp.

Merely to describe the strategy is to realise how (a) brutal and (b) ineffective it was always going to be.

PNG is the new, improved Malaysian Solution, open-ended and a significantly less appealing a destination than Malaysia, even if asylum seekers found to be refugees will have full rights there.

After the announcement of the Malaysian Solution, boat arrivals dipped significantly, but that also coincided with a fall in global and regional numbers of asylum seekers from the highs of 2010; it was thus hard to distinguish the push and pull factors in establishing whether the prospect of automatically being transferred to a third country is a significant deterrent for asylum seekers desperate to reach Australia by boat.

However, we’ll know before even an early election whether this works. Every boat arrival henceforth will be a test of what impact the announcement has had on asylum seekers. It’s also likely to be challenged by refugee advocates. The history of legal challenges to the government’s treatment of asylum seekers suggests successful challenges only ever usher in more draconian policies, never more humanitarian ones. Successful court challenges in the 1990s by Chinese and Cambodian illegal immigrants seeking to game the asylum system led to the establishment first of specialist tribunals and, eventually, measures to prevent appeals altogether. The successful challenge to the Malaysian agreement ushered in a new Pacific Solution and this latest policy.

That gloomy history is unlikely to deter refugee advocates from going to court, but a defeat of this agreement will likely see still more hardline policies, possibly from a Coalition government, designed to sate the electorate’s loathing of maritime arrivals and prevent Australia’s entire humanitarian program from becoming self-selected by people with the resources to get in a boat from Indonesia.

If the Rudd Solution does work, it will mark a substantial step for Labor in neutering something that, in spite of its lack of wider economic and social significance, has been electoral poison for it for over a decade. If it doesn’t, it will be another in a long line of failed Labor policies on the issue.

No idea why you suggest that compulsory preferential voting might be a problem. It allows Greens voters to cast votes which either actually elect Greens MHRs and Senators, or failing that help choose which other party will be able to form government – and of course most Greens voters would prefer the ALP in government over the Coalition.

It’s only a possible problem for parties trying to squeeze deals from How to Vote cards. Easy solution: ban such cards, and allow voters to preference the individual party lists above the line on the Senate paper.

I don’t think asylum seekers arriving by boat is a problem for Australia. But maybe the Rudd solution would be better than the Coalition’s next move, which seems to be withdrawing from the Refugee Convention.

Optional preferential voting, in Queensland for example, tends to turn the electoral system into first past the post, which may or may not be problematic depending on one’s view.

“Such straitjacketing is the great gift of compulsory voting and compulsory preferential voting for the major parties, albeit one on which compulsory voting advocates are peculiarly silent.” I agree with Xoanon. What’s the problem? Compulsory voting, including compulsory preferential voting, makes it harder for the individual to leave the decision up to the rest of society without conscious thought. It is no surprise that most people, confronted by that conscious decision, decide to have a say (i.e. register a valid vote). Arguments for optional voting depend on the (often unstated) view that some votes, and some voters, are more valuable than others. I’d rather citizens attended the polling booth than stay away, even if some of them toss a coin. How they make their decision is, in the end, their (democratic) business.

You are revolting Bernard, you reduce everything to same ignorant rant as Andrew Bolt and think you are a clever clogs.

Too much Canberra kool aide and not one thought for human beings or law.

We will not stop anyone from dying, 20,000 kids a day are dying of starvation and we cut foreign aid to make the die a bit quicker.

Crikey has gone the way of Fairfax and become a redundant dodo.

The opposition will not withdraw from the convention, but Rudd has already effectively decided we will.