‘No way’: PNG reaction to the boat people plan

People in PNG have reacted with shock then anger to the deal with Australia over boat people. Freelance journalist Catherine Wilson, who has lived and worked in PNG, surveys local reactions to the deal. 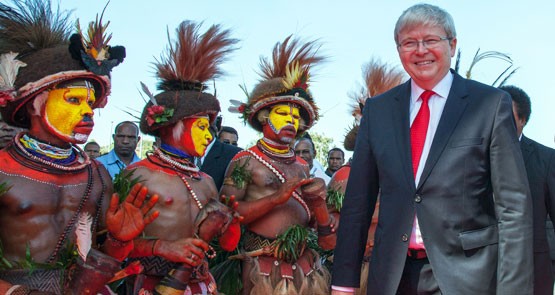 Australia’s decision to permanently resettle refugees in Papua New Guinea has been met with shock by many locals, quickly followed by anger and a sense of betrayal.

Under Prime Minister Kevin Rudd’s plan the developing Pacific island state will resettle an unlimited number of Australia’s asylum seekers who arrive by boat, if they are found to be refugees. In return, PNG will receive extra aid from Australia for hospitals and universities.

A day after Rudd’s announcement, made on Friday, many in PNG were still unaware of the pact. Silence reigned in the mainstream press, which had clearly not been briefed on the development, while social media comments pointed to a lack of consultation in the country.

“[PNG Prime Minister Peter] O’Neill and Rudd have betrayed the people of PNG doing cunning deals behind closed doors. How can the PNG Prime Minister not discuss or debate this in Parliament before putting pen to paper?,’ was one comment on the social media site PNG Attitude on Sunday.

Margaret Loko, an experienced Port Moresby-based election campaigner and former first secretary under Dame Carol Kidu, told Crikey: “No way. We have immense problems of unemployment and law and order. Women and children here suffer from very high levels of gender-based and s-xual violence. The government has to deal with these issues in our country. It cannot take on the job of solving Australia’s problems. We don’t want to end up with more problems than what we are coping with now.”

PNG is rated 156 out of 187 countries for human development by the United Nations Development Programme, while an estimated 15% of the population have formal sector employment and access to adequate public services. Information was not available over the weekend about how the costs of the deal would be met and which country would foot the bills. But questions are being asked about whether this arrangement serves PNG’s interests in any way, and whether full government consultation has occurred.

“This bilateral agreement between Peter O’Neill and Kevin Rudd to help Rudd with his re-election unfortunately is an act of heartless selfishness by two politicians. It has nothing to do with humanity or proper rules by which civilised nations and peoples of the world live and relate to each other and resolve difficult issues.”

Loko is not the only one concerned about the role of Australian aid in such deals. Since 2001 Australian Official Development Assistance (ODA) to PNG has totalled more than $4.6 billion with a budget estimate high of $507.2 million in 2013-14. Dr Ray Anere of the National Research Institute in Port Moresby commented to Crikey: “Financial aid and Australian assistance in some service delivery areas are no doubt key factors in the deal. There is no doubt about that in light of the PNG government’s push for greater service delivery in the district and rural areas … The challenges are numerous, including PNG’s ability to observe the basic human rights of the asylum seekers by providing proper medical, accommodation and other basic services. The issue of whether PNG has a legal framework and a policy on asylum seekers in place to deal with asylum seekers, especially policy and administrative mechanisms and processes, will be a key challenge in my view.”

The true motivations of Australian politicians in scenarios such as this remain questionable to many Papua New Guineans.

Concerns about the fate of those who will be resettled under this deal is not an indictment of PNG, where the average citizen will go out of his or her way to help another human being in need, whether friend or stranger. But the reality of the nation’s serious domestic challenges should be an integral consideration in Australia’s responsibility to ensure the welfare of the vulnerable and the displaced who have come to its shores.

PNG has acceded to the 1951 UN Refugee Convention and its 1967 protocols, but with reservations regarding the rights of refugees to basic services, such as employment, housing and education. It is difficult to see how, in a country where more than 80% depend on the informal economy, these newcomers will find access to adequate employment or means of financial support.

Female asylum seekers will find themselves in a society grappling with very high levels of gender and s-xual violence, with inadequate law enforcement. Last year the World Bank reported that violence victimisation rates in PNG were among the highest in the world and violent crimes were on the increase.  This is the reality of life for many Papua New Guineans. And with inequality and hardship being a key factor in the prevalence of crime, asylum seekers will find themselves in an atmosphere of heightened competition and aggravated local grievances about access to basic means of survival.

plan pact ? I understand it is in fact a very expensive and wobbly “agreement”. Which it appears has way to many holes in it. Just like those full page ads Rudd is running nationally paid for by tax payers not Labor.
Come by boat and Australia will never be home. Already we know that to be worthless spin. Because it is not happening. Rudd, Gillard, Labor generally can’t tell the truth even when trying to show Australian voters, Labor nationally is nothing like Labor NSW! Edward James

I have no quibble about taking as many refugees-as the need arises- as possible FROM South East Asia which is in our part of the world; Asia/Pacific to be precise.

On the other hand I deplore the fact the Oz government has allowed so many Middle Eastern people to settle here, Iran, Jordan, North Africa and Syria, Lebanon being but five examples. No matter how fine the individuals may be they bring Islam with them. They want to add to Australian law by allowing Sharia law for domestic issues, plus allowing Mullahs of limited education, (but vastly hate-filled) to create situations inimical to Oz;to disseminate anti-Australian Fatwas.

No matter what the bleeding hearts trot out, the above mentioned people are not good immigrants if they still adhere to fundamentalist Koranic beliefs.

Allow me to take a’schadenfreude’ selfie. I think it’s hilarious, and very fitting for a bunch of frauds being sent to some country they’ve probably never heard of. Having lived in PNG I can assure them that life will be tougher than anything they may have experienced in the middle-class ‘burbs of Teheran. PNG men are very violent, especially towards women. Being foreign AND Muslim are no guarantees of safety. I’m betting they won’t refuse an offer of a return ticket home very quickly.

Thanks Jon and Venise. We all know now who the rac!st ar*eholes section of the populations will be voting for. Take note Rudd, you can never please this type of person. Abbott and Morrison will always aim lower.

Wow Jon Cassar. So you’re actually happy and you think it’s “hilarious” that women will be placed in a situation where they will be subjected to “PNG men (who) are very violent, especially towards women.”
There are plenty of words out there to describe you. Most of them are four letters long.