Crikey fact-checks a cartoon on Kevin Rudd's nipples ... and it seems to be true.

More from the department of cartoon fact-checking. An unfortunate fact of the fact-checking game is that often we fact-checkers only check facts when we already suspect there is a whiff of untruth about them. With so many facts in the world, and so few fact-checkers, why check on things that are plainly true? Does anybody need to check that the sky is blue, that trees are green? No, these things are prima facie.

It was with this attitude that we began checking today’s effort from syndicated cartoonist Paul Zanetti, in which he depicts PNG PM Peter O’Neill cooking Kevin Rudd alive. Rudd seems unconcerned about this, in large part due to his belief that the PNG people have repaid the injection of funds that the Australian government’s shameful refugee policy represents with a free bath.

You may be wondering: where lies the fact to be checked? It is well known that Peter O’Neill is little more than a racist stereotype, and Rudd is famous for both his love of bathing and his naivete surrounding cannibalism. The fact-checking devil lies in the details, for Rudd has been depicted by Zanetti as having no nipples. And so we return to our original point: on the face of it, this would appear to be plainly untrue. Kevin Rudd, beneath his heartless political opportunism, remains a mammal.

However after conducting some specialised fact-checking research, we have determined that Google returns zero results for the phrase “Kevin Rudd’s nipples”, while a search for the exact phrase “Kevin Rudd has no nipples” returns a tweet from no less an authoritative source than Fake Penny Wong. I rate this claim: Dinki-di true blue. — Cam Smith

Foxes howl. From the Campaspe News on July 16. “The Department of Environment and Primary Industries is urging district residents to kill foxes this winter as part of the continued campaign to cull them. DEPI bio-security established animals manager John Matthews said foxes were preparing to enter a mating period of four to six weeks, a typically quiet time of activity for the animal.” As anyone who has ever had the misfortune of hearing foxes mating will tell you, the activity is anything but quiet. — Andrew Crook

Video of the day. Legendary American journalist Helen Thomas — who reported on every president from JKF to Barack Obama and famously occupied a front row White House briefing room seat — passed away on the weekend, age 92. This 2008 interview with our own Andrew Denton reveals something of her caustic sense of humour and pull-no-punches personality. 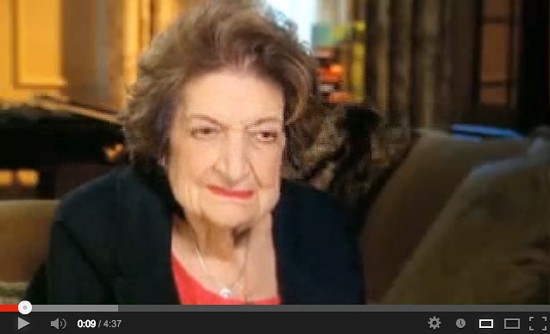