Kevin Rudd broke the news of the new PNG asylum seeker solution in classic media style -- late on a Friday. How did the media react?

The announcement of the Prime Minister’s new hard-line asylum seeker policy had all the trademarks of a classic political how-to: carefully placed leaks throughout the week and then a bombshell new policy at at 4.30pm on a Friday, when most journos had already headed to the pub, leaving minimal time for immediate scrutiny but still enough minutes to splash big with it in that evening’s news.

The coverage must have kept Kevin Rudd content, with his “Rudd Solution” — which ensures that asylum seekers arriving by boat will never be resettled in Australia, even if found to be genuine refugees — receiving supportive mainstream media coverage.

Ten News was first with the announcement at 5pm. Sandra Sully introduced the story: “But first, it could be his most important policy of the election. And now we know how Kevin Rudd plans to stop the illegal smuggling of refugees into Australia.” 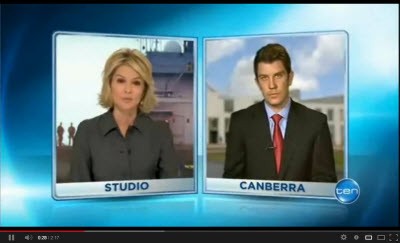 Over at Seven News, Mark Riley reported the news — “Arrive by boat, leave by plane, on a one-way-ticket to PNG … It’s aimed at smashing the people smuggler’s business” — before noting that the focus could now return to when the election would be held. 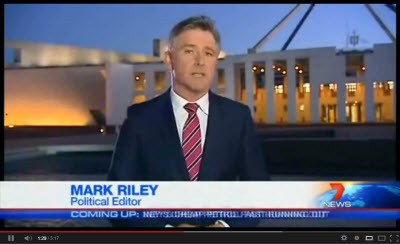 Veteran Laurie Oakes delved into the issue more deftly that most for Nine News, noting the deal with Papua New Guinea “will dramatically change the border security debate in Australia”. 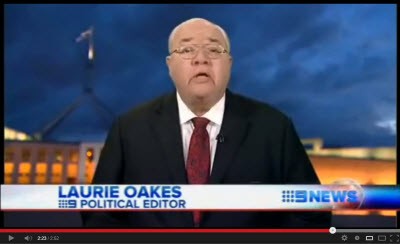 “The new policy is tougher than anything suggested by Tony Abbott, tougher even than measures adopted by John Howard,” said Oakes. “Mr Rudd promised three years ago not to lurch to the Right on border security. But it’s one broken promise likely to get a tick from voters.”

He added: “Labor now has a positive story to tell on an issue that’s been causing it to haemorrhage votes.”

The tabloids were a mixed affair, with The Daily Telegraph accusing Papua New Guinea of being “lawless” on its front page and decrying the government for sending asylum seekers there. 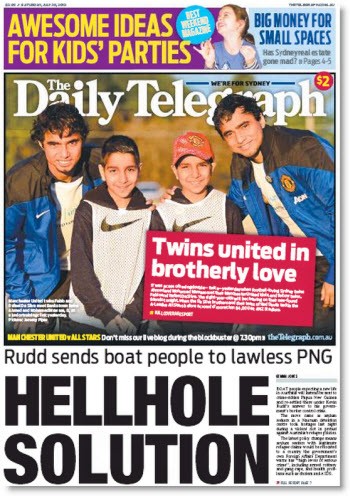 “Boat people expecting a new life in Australia will instead be sent to crime-ridden Papua New Guinea and resettled there under Kevin Rudd’s answer to his government’s border control crisis,” wrote political reporter Gemma Jones. “The latest policy change means asylum seekers with legitimate refugee claims would be relocated to a country the government’s own Foreign Affairs Department warns has ‘’high levels of serious crime’, including armed robbery and gang r-pe, and health problems such as cholera and AIDS.”

Melbourne’s Herald Sun provides an interesting contrast in its front pages between Friday — before the policy was announced — and Saturday: 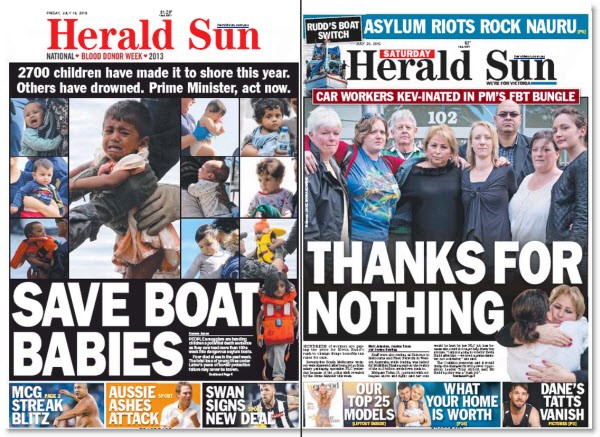 Another article by Gemma Jones focused on the cost to taxpayers of the new scheme:

“The riots came on the same day Prime Minister Kevin Rudd gave Papua New Guinea a blank cheque to resettle all asylum seekers who arrive in Australia by boat, in a dramatic attempt to solve the border protection crisis.

In return, Australian taxpayers will half-fund university reforms in PNG, the redevelopment of a hospital in Lae and its ongoing costs, and national law-and-order initiatives, as well as all refugee resettlement costs.

The sweeteners are expected to cost billions, yet the camp at Manus Island is a boatload away from being full.”

Over at traditionally Leftie Fairfax, the front pages were sceptical of Rudd’s plan. 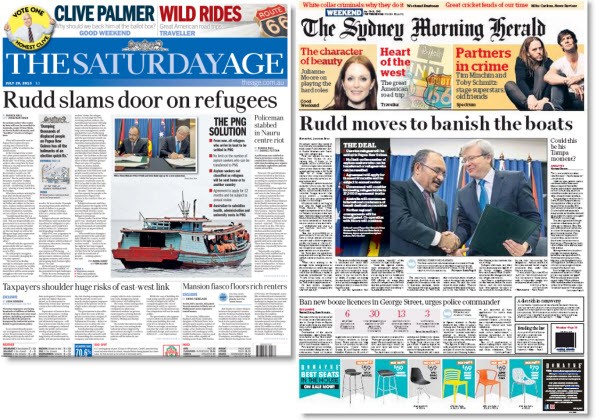 This may be Rudd’s Tampa moment, wrote Michael Gordon in The Age:

“The message is that if you get on a boat to Australia, you will never get to live here. Ever. The aim, in the political vernacular, is to destroy the people smugglers’ business model. If it is implemented as planned it could do that, at least in the short term, but at enormous human cost. The sugar has been taken off the table, and replaced with arsenic.”

But the new policy got the tick from The Australian‘s Dennis Shanahan:

“Kevin Rudd’s deal to banish all asylum-seekers arriving in boats to Papua New Guinea is the political circuit-breaker Labor has needed for years. Tony Abbott had no choice but to endorse the agreement with PNG Prime Minister Peter O’Neill and be positively welcoming. …

Rudd has deliberately angered the Greens, human rights groups, refugee supporters and the Left of his own party in the name of burying his own record on dismantling and decrying Howard’s Pacific Solution, jamming Abbott into supporting the scheme and contrasting his success in PNG with Julia Gillard’s offshore processing failures in East Timor and Malaysia.”

Meanwhile, radio listeners, newspaper readers and TV watchers are to now be inundated with ads spruiking the government’s new policy, with these full-page ads running in newspapers across the country: 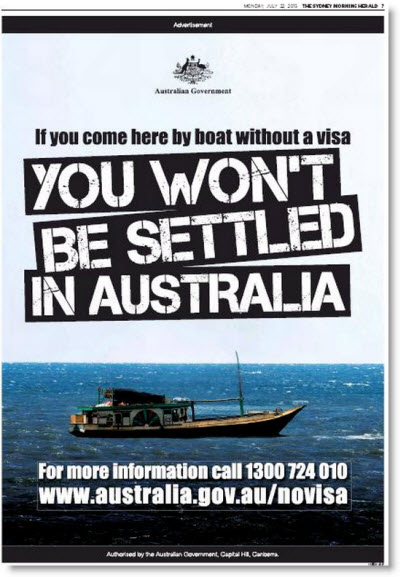 With the federal government one of Fairfax’s top three advertisers, it’s likely the government would receive an estimated 40% discount off the casual advertisement rate.

However, the ad campaign will still cost millions. Considering Fairfax claims that 36% of its audience comes from the exclusive AB demographic, its readers are more likely to be BMW drivers than wannabe boat people.

It seems that the Govt is not content with full page ads, they’ve now got DIAC releasing (face blured) shots of refugees. Captioned as sobbing because they’ve just been told they’re off to PNG. http://is.gd/z2Iqod
I can’t quite believe the utter nastiness of it all.
Deeply shameful stuff.

You can’t beat the msm can you – much as you’d like – they own this playground.
They lined up to bury (or parrot those handling the shovels) Rudd/Gillard/Rudd under an avalanche of negative PR re Labor’s handling of this issue, while letting Abbott and Igor “Reith-Morrison” off “Scott-free” – then when Rudd muscles up (and out-Abbott’s Abbott) there they are, lining up to kick Labor in the arse for going over the top being “heartless”?

“Boat people expecting a new life in Australia will instead be sent to crime-ridden Papua New Guinea and resettled there under Kevin Rudd’s answer to his government’s border control crisis,” wrote political reporter Gemma Jones. “The latest policy change means asylum seekers with legitimate refugee claims would be relocated to a country the government’s own Foreign Affairs Department warns has ‘’high levels of serious crime’, including armed robbery and gang r-pe, and health problems such as cholera and AIDS.”

Oh I’m so moved by the concern for refugee welfare suddenly showed by Murdoch’s Telegraph.

As for the Hun – they got their Friday wish and then found something else to beat Labor up on.

SOP for the Murdoch press…