The Victorian ALP has received five nominations for the number three spot on the party's Senate ticket vacated by David Feeney.

The Labor Party has received five nominations for David Feeney’s looming Victorian Senate vacancy, igniting a simmering intra-Right factional war as the related battle for the plum lower house seat of Hotham goes down to the wire.

In Hotham, Labor Unity veteran Rosemary Barker is up against Monash councillor Geoff Lake to decide Simon Crean’s successor. Rank and file voters deluged the South Oakleigh Bowls Club yesterday for the first half of the local ballot, with voting set to resume at 6pm this evening.

As Crikey explained on Friday, Lake needs to win locally to stake a claim for his candidacy with the POSC, that under party rules decides the other half of the vote. But the panel will need to tear up the usual factional alliances to assure him victory.

A Lake win in the rank and file component could also place pressure on Barker to withdraw, although a high turnout of Cambodian and Vietnamese stacks yesterday suggests the 33-year-old Minter Ellison lawyer and former ABC News Breakfast newspaper review expert is facing an uphill battle.

Under the party’s crumbling 2009 stability pact, Hotham is reserved for Labor Unity and the Socialist Left is bound to support the Unity candidate. But that was before the ructions inside Unity over Julia Gillard’s knifing and other festering sores saw the Shop, Distributive and Allied Employees Association component threatening to join with the NUW (and possibly the Conroy part of the ‘ShortCons’) to freeze out AWU forces.

Lake slammed Socialist Left members for handing out for Barker yesterday: “There were Left people there all day actively handing out for Rosemary and trying to get every SL voter to support her. It’s interesting given she had made a point of campaigning on a contrast between her stance against marriage equality and euthanasia to my view in favour.”

“I’m really not sure what the Left stand for anymore other than the mechanics of internal power. Although they don’t have a lot of votes [about 30], I saw good lefties who had committed to vote for me who wouldn’t look me in the eye and seemed apologetic and sad that they were being made to vote a factional position above what they wanted to do.  This is going to make things tougher for me.”

The Hotham showdown has been riven by sickening shit sheets over euthanasia, gay marriage and women, as well as the apparent involvement of Melbourne Ports MP and Shorten loyalist Michael Danby, who called local members to suggest Lake wasn’t sufficiently supportive of Israel. A letter sent by former Monash councillor and old-school Unity supporter Felicity Smith, obtained by Crikey, attacks Lake for his “questionable” track record of working with women. And a translation of an anonymous sheet sent to Greek voters, also obtained by Crikey, ridiculously highlights euthanasia and gays. 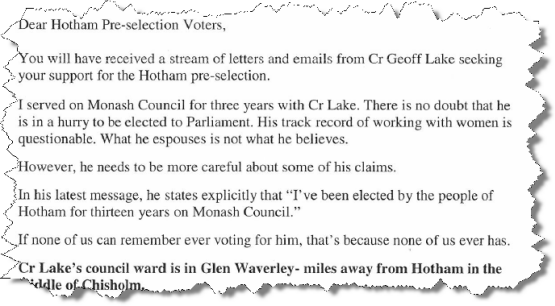 Victorian Labor’s right flank stands close to implosion. Last week, AWU state secretary Ben Davis and Tillem apparently dissolved the agreement between the SDA and Labor Unity, forged in January 2012, over SDA state secretary Michael Donovan’s support for Lake. Former AWU state secretary turned Victorian upper house MP Cesar Melhem then graciously apologised for trying to bring the so-called “shoppies” into the tent. The Socialist Left is privately aghast at the situation but are fearful that by abandoning the stability pact they would face massive and sustained retribution, with numerous Left-aligned MPs in Melbourne’s north lined up against the wall.

The vacant number three Senate spot and Feeney’s position has been rolled into one at the behest of Labor’s ruling National Executive. Feeney’s vacancy stretches until June 30 next year, but the successful candidate would need to snag a significant increase in Labor’s primary vote to remain on the red leather beyond that date.

For those interested in some of the things I would pursue if elected to the Senate, check out some horror you won’t find in the MSM. http://www.avaaz.org/en/petition/Ban_Arsenic_Carcinogens_in_Australian_Food_Production_1/