Mid-term report card: Australia a US ‘puppet’ on the Security Council?

Australia has been on the UN Security Council for six months. Are we using the experience to make the world a better place -- or just doing the US' bidding? Crikey intern Fergus Hunter reports. 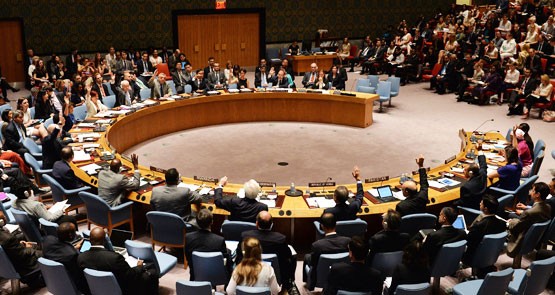 After a five-year, $23.6 million campaign begun under Kevin Rudd’s first prime ministership, Australia secured one of 10 temporary seats on the UN Security Council last October, getting 140 votes in the General Assembly (countries need 129 votes to secure a seat). The victory attracted widespread praise, but some doubted — and continue to doubt — whether it was worthwhile.

According to a briefing from the secretary of the Department of Foreign Affairs and Trade to Foreign Minister Bob Carr, the purpose of the push — the seat will be held for two years — is to “advance our regional and multilateral interests”. A spokesperson for Carr told Crikey Australia’s focus includes solutions in Syria, nuclear non-proliferation, and sanctions against Iran, al-Qaeda and the Taliban. Australian National University academic Dr Jeremy Farrall, who has extensive experience with the UN, thinks Australia wants to “bring its 60 years of experience in peacekeeping and peace-building to the table”.

Bruce Haigh, a former diplomat and current Crikey writer, has a less optimistic view. “I think it was just the prize,” Haigh told Crikey. “Rudd wanted a seat on the Security Council not for any purpose in particular other than the prestige.” He says all our goals are “retrospective”, and that since assuming the seat on January 1 we haven’t used it well or creatively. Haigh isn’t the only sceptic. One person close to the situation says the main objective is to avoid making any embarrassing blunders.

Australia, seen as a “middle power”, has got some runs on the board so far, including restricting the global small arms trade (mainly guns, also tanks). The Arms Trade Treaty was adopted by the General Assembly in April, and 79 nations have signed it so far. Australia played a critical role in its adoption and continues to work on it.

The five permanent members of the Security Council (P5) have awarded Australia the chairmanship of three sanctions committees concerning al-Qaeda, the Taliban and Iran. Farrall thinks the P5 gave Australia those roles due to “a combination of respect and expectation for their leadership, and their willingness to contribute”, and not just because our diplomatic mission is well-resourced.

Carr’s office said significant achievements so far included leading the renewed mandate for the UN mission in Afghanistan, resolutions in response to North Korean belligerence, and contributions to the monthly discussions on the Middle East.

“Haigh contends that Australia has well and truly lost its independence and is seen as an ‘acolyte or puppet of the US’.”

As a middle power, some doubt just how much weight Australia has. It is riskier to act in the national interest than it is to fall into line with the United States and United Kingdom. Haigh contends that Australia has well and truly lost its independence and is seen as an “acolyte or puppet of the US”. Australia has voted with the US on every resolution so far in the Security Council, although every passed resolution this year has been unanimous (some resolutions have been vetoed).

Ultimately, however, the Security Council is increasingly dominated by the P5 countries. As well as assigning which country’s mission will chair subsidiary committees, they maintain control of the resolution-drafting process in various ways. Every draft resolution has a “pen holder”, which possesses enormous influence over it, and all but one of these are held by P5 representatives. The veto power of the permanent members continues to be a barrier as well. Even the threat of veto — known as the “closet veto” — will cause a resolution to be withdrawn even if it’s in the final stages of being drafted.

However, Australia could achieve diplomatic goals in a less formal capacity. Being in this position boosts Australia’s profile as a participant in important decisions on international peace and security. Our representatives have the opportunity to work closely with useful states — whether they’re bigger or smaller — and top-ranking diplomats. Improving links with these nations creates other opportunities and can mean progress with objectives like bilateral trade agreements and initiatives in other bodies like the G20.

While there are differences of opinion over whether Australia is doing all it can, there remain many opportunities to advance the national interests, including in September, when Australia will assume the presidency of the Security Council. In a reminder of the importance of strong UN representation, Prime Minister Kevin Rudd yesterday flagged possible changes regarding our commitments to the Refugee Convention as part of a wider strategy on asylum seekers.

Um………australia has voted with america on all votes, and all votes have been unanimous? Did I miss something……..or did the former diplomat whining about missing out on getting the post to the security council want us to be different for the sake of it?

A puff piece on Crikey? Lots of questions and cloudy musings about the brief appearance on the SC of the 51st state of the union.

In the last several decades, the United States has used its veto on dozens of occasions – more than any other member of the P5.

For example, on February 18, 2011, the US vetoed a draft resolution condemning Israeli illegal settlements on the West Bank.

I think that says a lot about the legitimacy and merits of the Security Council: it is a chessboard where the superpowers butt heads and (too often) squander precious opportunities on the altar of stale agendas and unexamined patronage.

All that for a seat at Top Table with all the other nobs, and we’re only temps anyway?

Kevin Rudd will call a late October election. He’ll want the “Prestige” of attending the UN in New York!