Do you know what YBR Funds Management is? The Australian Financial Financial Review management does, as does Fin columnist Christopher Joye ...

You’re hired! YBR link on the down-low. Do you know what YBR Funds Management is? The Australian Financial Financial Review management does, as does Fin columnist Christopher Joye, who “is currently a director” of the company, according to the AFR website. YBR is part of Mark Bouris/Nine Entertainment/Macquarie Bank-owned Yellow Brick Road (the company involved in Celebrity Apprentice). The AFR describes Joye as:

“… a leading economist, fund manager and policy adviser. He previously worked for Goldman Sachs and the RBA, and was a director of the Menzies Research Centre. He is currently a director of YBR Funds Management Pty Ltd.”

But it doesn’t include that disclosure on every article he writes. This morning’s extensive reporting on Chinese telecoms company Huawei in the AFR by Joye (and reporter John Kerin on pages 36 and 37) didn’t disclose the YBR link. The impression is left that Joye is purely an AFR columnist and or writer, when he isn’t. That impression was also left a week ago with a front-page commentary by Joye that an August rate cut was on the RBA’s agenda after the June jobs report. No disclosure of his YBR involvement with this effort in the paper or online, which is odd given that interest rates and actions of the Reserve Bank would directly influence YBR’s business plans, and those of its parent, Yellow Brick Road. — Glenn Dyer

Get Fact: Downer’s kinky cartoon. If you could make just one criticism of the recent fact-checking craze, it would be its limitation to the purely textual. No more! Today is the dawn of a new age: cartoon fact checking. In today’s Australian Financial Review, Rod Clement depicts a charming scene in which Bespoke lobbyists Alexander Downer and Nick Bolkus impress on opposition communications spokesman Malcolm Turnbull the benefits of the NBN. Turnbull holds out a single index finger to mark his opposition, as if to say: “Come on, dudes, I am pretty publicly committed to being against this thing. I’ve said that a lot.” 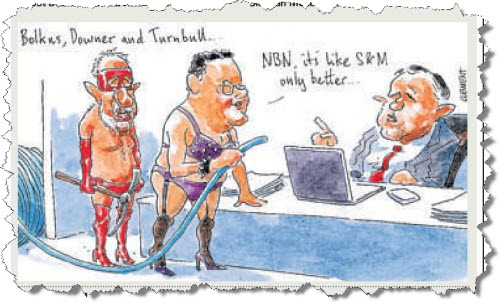 So far, so good. This, however, is where Clement diverges from reality. In the cartoon, Downer and Bolkus are depicted holding pick-axes and a roll of fibre optic cable. They are also dressed in bondage gear and fishnets, which astute political wonks will recognise as a reference to the fact they are from Adelaide, the city of perverts. It’s highly unlikely that even the spivviest of NBN contractors would allow employees to get into Telstra pits wearing so little in the way of safety gear. We rate this claim: a deconstructed porky pie with dishonesty mash.

Further, Downer is saying to Turnbull, “NBN, it’s like S&M, only better …” Are we to believe Downer, who has been consistently depicted in fishnets since 1996, would prefer the amazing but boring benefits of telehealth and improved productivity to the visceral, dangerous thrills of whips, collars and s-x swings? We rate this claim: a brand-spanking lie. — Cam Smith

No dolphins in the sky. Do you see it? The dolphin? In the clouds? No, neither do we. But Destination Port Stephens, a tourism propaganda agency, dispatched the picture to local media yesterday suggesting a “pic story” of the “dolphin cloud over Port Stephens”. The journalists politely declined … 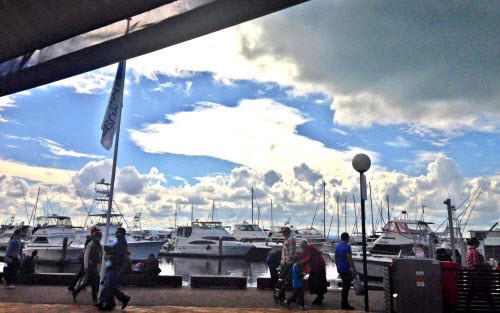 Song of the day. The Crikey bunker was enthralled yesterday when a reporter tuned into the official theme song of the Rise Up Australia party. The party — which has the motto “Keep Australia Australian”, and is anti-multiculturalism — is the brainchild of Reverend Danny Nalliah (yes, the one who blamed Victoria’s Black Saturday bushfires on abortion). Crikey’s favourite line in the song is: “We’ve embraced our ethnic cousins, they’re our mates”. Click on the image below to enjoy the song. 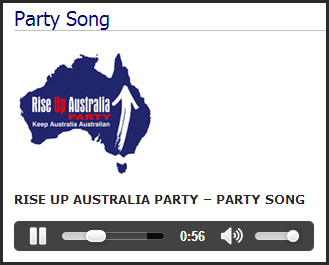 Front page of the day (sort of). The NT News poster for today’s edition outs the nation’s most famous bum as a Top Ender … 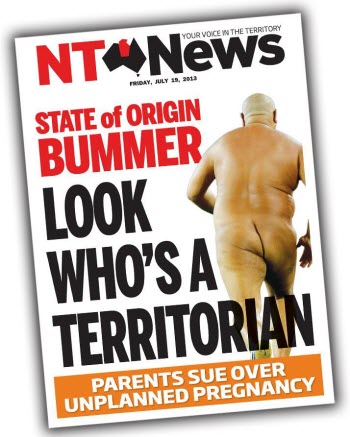