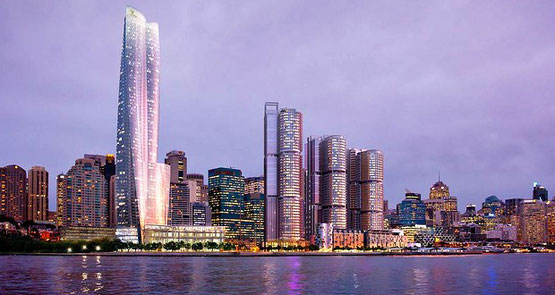 You are what you build. This phrase was on my mind over the weekend when I found myself on the water looking at the Opera House and the Harbour Bridge and thought: aren’t they smart. The gents building that Barangaroo casino, that is.

Most images show the proposed casino only from one direction. The reason is pretty obvious once you find yourself on the water looking at the site from the other side: the building will dwarf both the Harbour Bridge and the Opera House. It will dominate and redefine this capital harbour city, and everyone will know that this most prominent of buildings catching the rising and setting sun on its brilliant silver skin is Australia’s answer to Las Vegas. 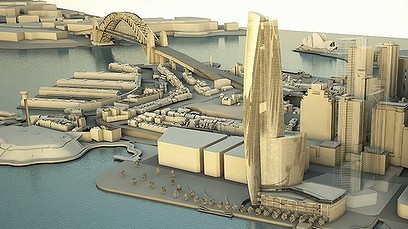 But unlike Las Vegas, which America has tucked away in a desert, Sydney is Australia’s international ambassador. Australia will be saying that the people huddled over the pokies in twilight pubs and the odds racing across every broadcast sporting event are what counts.

I’m a New Yorker born and bred currently graced by living here in Australia. New Yorkers have a reputation for speaking their minds, so excuse me for being blunt: if Australia builds this thing (and make no mistake, it will be Australia and not just some Packer consortium or a nincompoop state government doing it that you can all blame later as per usual), the country will be making a global statement about itself, about what it values, about what it dreams and believes. It will be everybody’s casino. They built it. You own it.

Not only will the building be telegraphing this message to the rest of the world, it will be telling itself and future generations of Australians what kind of society Australia aspires to be.

From where I sit, an observer in the start-up world, Australia, perhaps more than any developed country on the planet, is at a critical juncture. It can either become the country that this vast continent seems to have always promised that it would become or it can become Macau. Macau will never be the city of the future or the centre of something really valuable, it will always be a stop on the road to somewhere else, a diversion. Macau won’t be the place where the world-beating research will be done that helps cure cancer. And Macau won’t become a hub of innovation where the next start-up, nurtured by enlightened policies, exports the world-changing tech while employing thousands locally and cracking one trillion dollar market capitalisation.

(On the other hand, Macau will be a place where regulators worry about money laundering behind the shield of VIP rooms, as one Nevada gambling expert recently pointed out.)

Macau and Vegas and Atlantic City generate a lot of emotions, but inspiration, awe and wonder aren’t usually among them — and the sad thing, again, is that Australia seems so close to becoming a genuine player — not just a risk trade or a sometimes reserve currency or a country with weird animals and a few eccentric characters who smile a lot and speak funny.

It might seem overly dramatic to suggest that a single building will define a nation’s course in this way. But just because something is dramatic doesn’t stop it from being true. Does Australia really want to be seen as a fly-in country for high rollers? Or more to the point, obscure the strengths that have the potential to make it truly great: a place where the best and the brightest want to come instead of escape?

Maybe a single building doesn’t define a nation’s ultimate course, but it does help chart it. The Empire State Building was completed in the depths of the Depression. The Snowy Mountains Scheme didn’t emerge from prosperous times, but it helped usher them in. Where is the visible sign that innovation is embraced here? Where’s that tower?

So I guess it bears repeating: a society is defined by the structures it chooses to build (or not build).

Australia is a fine country, and the world knows it. But modest Australia probably needs to remind itself of what it is. The Statue of Liberty watches over the harbour of my home city, and 4 million people from all over the world visit Lady Liberty every year because it means something. The Opera House was a great first step for a strong, young nation; I am hopeful Australia will think twice about making the second step a casino.

Want to know how to make money and control a government? Here’s how

I couldn’t agree with you more Jonathan! We don’t need ‘Packer’s p-nis’ defining Sydney or its skyline.

Agree absolutely. Other wealthy men, the Rockefeller brothers, built the World Trade Centre against huge opposition – but the money spoke louder than thousands of displaced residents. As we know, it was perceived as a beacon for capitalism and ended in tears.

But how to stop Packer’s abomination now…?

Maybe Crikey could try to “winkle out” young Mr Utzon’s thoughts about what impact Packer’s monstrosity will have on Sydney’s skyline if it ever get’s built.

Even better, why not invite comments from around the world from high profile people with independent viewpoints and who are beyond the reach and likely retribution of both Messer’s Packer and O’Farrell