A tale of two Murdochs: Rupert responds to leaked tapes

Rupert Murdoch says he chose the "wrong adjectives" in a leaked recording of a meeting with Sun journalists over ongoing legal challenges. It's his first response to the latest scandal. 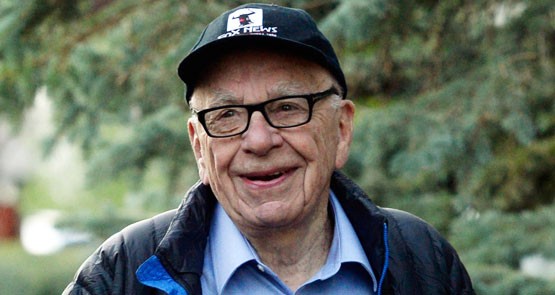 News Corp chairman Rupert Murdoch has denied knowing before 2011 that his UK journalists were paying police officers for information, despite telling journalists at The Sun the practice had existed on Fleet Street for “a hundred years”.

Two letters written by Murdoch — but no doubt heavily legalled — were released overnight, and represent his first detailed response to a leaked recording of a meeting with Sun journalists. Murdoch is facing a fresh UK police investigation over the tapes and they may have implications in the United States, where the Foreign Corrupt Practices Act makes it illegal for a company to bribe officials.

He has also retracted claims that the British police investigation into wrongdoing at his newspapers had been “totally incompetent” and was over “next to nothing”.

In his leaked meeting at The Sun, first published on the ExaroNews website, Murdoch said:

“We’re talking about payments for news tips from cops. That’s been going on a hundred years, absolutely. You didn’t instigate it … Now there was a law passed against this in 1906. That’s when it was first recognised as a problem … I think it’s just outrageous, but — and I don’t know of anybody, or anything, that did anything that wasn’t being done across Fleet Street and wasn’t the culture.”

Murdoch also described his direct experience of seeing a wall safe in the office of the News of the World CEO containing emergency funds for payments to powerful friends.

Murdoch says reports interpreting these comments to mean he was aware of payments to police officers — illegal under UK law — are “completely false”. He writes in the letter to John Whittingdale, chair of the Commons media and culture house committee:

“When I first heard there was evidence of inappropriate payments in Spring 2011, I agreed with the decision to seek counsel and then report this information to MPs, which led to Operation Elveden.”

In a separate letter to Keith Vaz, chair of the home affairs committee, Murdoch says he used the “wrong adjectives” to describe the police investigation into his papers. In the leaked tape, Murdoch said:

“I mean, it’s a disgrace. Here we are, two years later, and the cops are totally incompetent. The idea that the cops then started coming after you, kick you out of bed, and your families, at six in the morning, is unbelievable. But why are the police behaving in this way? It’s the biggest inquiry ever, over next to nothing.”

The media mogul has now retracted those claims, saying:

“I am in no position to judge the competence of the investigation and should never have done so … While I regret my choice of words in that highly emotional meeting, I care deeply about my employees, and I was and am troubled by the effect of these events on them.”

Vaz, a member of the UK Labour Party, told the ABC overnight he was “grateful” for the letter and said it provides “all the information that we were seeking”. But Murdoch is still expected to be recalled for another appearance at the culture, media and sport committee.

Good luck getting Rupert to come back to Britain.. He might finish up holed up with a real journalist in an Embassy..

The sun dog looks prune fleshed and pathetic when grovelling in front of a parliamentary committee but grows horns a tail and 3 metre nose when he thinks no one is listening. This is the creature who will be running autralia after the next election. He owns both leaders

I was kind of hoping that the expression of gratitude for the great mans letter was because the failure to adequately explain away his honest comments to his employees meant an inevitable finding that he was not a fit and proper person, but I suppose that would be too much to ask for.

We’re talking about payments for news tips from cops. That’s been going on a hundred years, absolutely. You didn’t instigate it

GOTCHA! There is absolutely no ambiguity in that statement. Murdoch knew and condoned this illegal behaviour before, during and after it all came out. The Feds in the US should be taking this as proof positive that the Chairman of News allowed the bribery of foreign officials.
Sadly, I suspect nothing will happen as the political will to nail the evil old bastard just isn’t there.

At least Murdoch’s allegedly deeply cared for employees are now guaranteed he won’t be making any more shallow in-house speeches.