Julia Gillard signs up to write her memoirs ... Did Kevin Rudd shut down the band? ... Crikey helps save you money ...

The Gillard Diaries. Apparently Julia Gillard has signed a book deal with Penguin to dish all the goss on her time in politics and as the first female prime minister of Australia. Penguin publisher Ben Ball declined to confirm the rumour — which means we expect a press release announcing it to land in our inbox shortly.

Publishing insiders estimate Gillard would garner an advance of between $400,000 and $750,000. Gillard was never known for her writing skills — would she employ a ghost writer to help her out? If you know any more about the alleged book — including just how large that advance is — drop us a line …

Rudd shuts down the band? Our ears pricked up at this tip from a well-placed Canberra night owl — we thought we might be onto a repeat of the time Kevin Rudd threw a tantrum when a meal was not available on a flight in 2009. The tip relates to the regular Thursday night shindig at Canberra’s National Press Club, when a merry, mature-aged clientele has a boogie to a band in the main bar.

“Last Thursday night, the crowd was dancing away about 9pm when suddenly a staff member pulled the plug on the band and told the patrons they could stay but they had to be quiet as Rudd had just turned up to have dinner in the restaurant and had complained about the noise level. There was almost a riot.”

So was Rudd responsible for the day the music died? We put this to NPC chief executive Maurice Reilly, who confirmed Rudd had attended a dinner in the boardroom at the NPC (which is quite near the main bar in the club’s complex) last Thursday, arriving at 8pm and leaving just after 9pm. And yes, the band “took an extended break” from 8.10 — 8.50pm, because of the noise issue.

However, Reilly was adamant Rudd did not complain about the noise. “Nobody complained,” he told Crikey. Reilly said it was standard practice for the NPC to restructure its activities to manage noise when there was a high-level board dinner.

And for the record, the band playing was rock / soul / blues outfit Soul Strangers (“they were lovely actually,” noted Reilly). Given Rudd’s social media frenzy of late, we’d expect him to hit the dance floor and instagram a selfie — not shut down the band.

Missing ALP. A reader was surprised to receive this pamphlet from Wayne Swan — “no logo and the word Labor is absent too”. 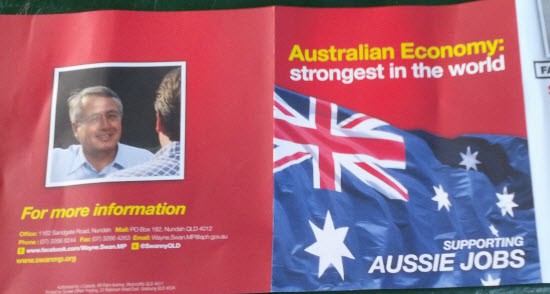 We pored through the pamphlet and no, the pamphlet is not very ALP-branded. It also talks up “Federal Treasurer Wayne Swan,” but we can’t blame him for reliving the past a bit — better than wasting the printing allowance. Remember to send in any election guff.

Social media duel. Last night’s State of Origin game allowed our dear leaders to battle it out via social media last night. KRudd has been tweeting and instagramming up a storm since he resumed the top job, and we’ve noticed that Tony Abbott has lifted his game in response. The winner from last night’s contest? We can’t help noting that Rudd is a Queenslander while Abbott lives in Sydney …

Big Brother in your bank account. Since May the federal government has had the right to take the money out of any of your bank accounts that have not been accessed in three years. Nice little racket for the government. We were interested in how this was affecting people; here are some of your responses.

“ANZ closed my 93-year-old mother’s account without notifying me, and I am the Enduring Power of Attorney of Record. After they had closed it, they sent me a letter saying that they had closed it and apologising for not telling me before they did it. If they were going to send me the letter of apology, why not send me a letter of notification? My UK bank, Barclays, did. I had a short amount of time to call them up and reverse it, otherwise it was going to be very tricky. I made the call and they said they would reinstate it. Having seen this, it reminds me that I should check up and make sure that they did.”

“I went online to do some banking, and one of my three ANZ accounts had disappeared — just gone. No message, no nothing. I rang the bank and was informed that the account in question (a V2 Plus savings account) had been closed and the money taken by the government (I can’t remember his exact words) because the account had been inactive for three years. I expressed stunned outrage and he told me what steps to take to get my money back (it was almost $22,000). He said they had sent me a warning letter prior to the seizure, but if they did, I never received it. About a month later the account was reactivated and my money returned. The account may have been inactive for the past three years, but I had certainly viewed it online during that time, and always dutifully declared the interest in my annual tax return.”

“As an expat for the last five years I was surprised to recently receive a letter from ING informing us that as our savings account had been inactive for three years that they were going to send the cash to unclaimed moneys. We’re yet to start the process of getting the cash back but I’m sure it will be a super-simple and straightforward process </sarcasm>.”

Crikey is outraged on our readers’ behalf, so here is Tips’ guide to how to keep your money. The new laws, passed late last year, mean the government can raid your account if it’s not used for three years (it used to be seven). To avoid this happening, you need to make a withdrawal or a deposit — just receiving interest or viewing your account does not count. Make sure your bank has your current contact details (a pain if you’re a nomadic renter). If the government takes your money, go to ASIC. You have the right to get it back — and there is no time limit to claim it — and you have a right to your interest foregone.

Tips found this handy little search engine where you can look for missing bank accounts in your name (or anyone else’s, which is quite fun).

We hope we’ve saved some readers some money today. Don’t say Tips doesn’t look out for your interests!

So what happens with a 5 year term deposit?

I still fail to understand why the government cannot notify the owner of the money via the tax system. Just associate each account with a tax file number.