In era of crap, Zimmerman case lurks in swamp of racism

A white neighbourhood protector shoots an unarmed black man through nothing but institutional fear. The fight against racism is so far from done as to be dispiriting to those fighting. 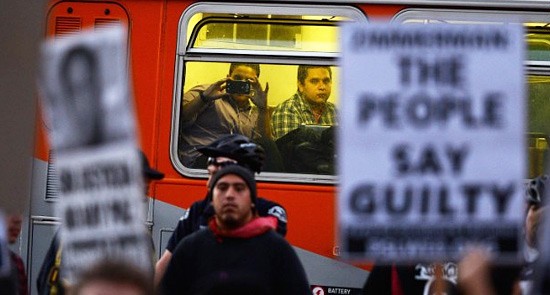 When you try and think of a term to describe the current period in the United States and the United Kingdom — not in lalalaland Australia, stand down there — one gropes for words. “Stagnation” a la the ’70s? The “downturn”? I suspect that “crapiness” probably covers it. Crapness? Craposity? This era will come to be known as the crap era. There has been no huge victory for the forces of enlightenment and progress, but no huge defeat either. Just a slow grinding backwards, a reminder of how slowly things shift.

Thus the UK government is a bunch of Eton messes, blithering numpties, whose initial election and continued support bewilders — until you look at the Labour Party then and now. Whatever danger they were under of getting tossed in 2015 has been mitigated by the vicious scapegoating brought in by Lynton “Light ’em” Crosby. Resistance there has been, from groups like UK Uncut and the new People’s Assembly, but getting it fired up has been like lighting a fire with damp newspaper … on the moors … with bronchitis.

Meanwhile in the US, the Obama second term first appeared to be devoid of a major plan, and then it became clear that the major plan had been to continue the process by which the Empire consumed the Republic by means of a total surveillance apparatus and global drone wars. Only the fact that the Republican Party was some sort of klown-kar disaster zone gave the Democrats an aura of authority. The recovery has not yet fully fired up, and there was “sequester” gridlock, which was a way for the Republicans to run down an already shredded social state.

Then, 48 hours ago, the George Zimmerman-Trayvon Martin case reminded everyone that the entire ramshackle non-system of American justice is built above a yet-to-be-drained swamp of racism. Zimmerman, the 28-year-old neighbourhood watch captain of a Florida gated community — commentators usually note that it is a “multiracial” one — bailed up Martin, a 17-year-old black kid, visiting with family there. Like many gated communities, Twin Lakes was about three times as fearful as a normal suburb, above and beyond standard American fear. As watch captain Zimmerman had phoned the cops nearly 50 times over the previous 18 months. Eventually they advised him to get a gun, even though NW volunteers aren’t meant to pack heat. Several weeks after a series of break-ins, some of them by young black men, Zimmerman spotted Martin jogging — in possession of black skin, as they say — and called the cops. They told him not to give chase. He gave chase.

There was an altercation, the details of which remain murky, and mid-struggle Zimmerman pulled his gun and shot Martin dead. He was released by the cops without charge six hours after police attended. In a state with “stand your ground” laws — by which people threatened by crime are not required to retreat rather than opening fire — they concluded it was a case of clear self-defence. There was no ground to stand of course, and that principle would eventually not be used in Zimmerman’s defence. Only a sustained campaign by Martin’s parents had the case reopened. Local prosecutors who hadn’t pursued the case initially then ran with a “murder” charge, which required a proof of intent to kill. A six-person jury — all female, white and mixed race — acquitted Zimmerman and rejected an alternative manslaughter charge, and then all hell broke loose.

“Its root problem is mutual fear and mistrust — frequently but not exclusively race-based — but the only ways of dealing with it that are available to them makes things worse.”

The case became a rallying point for the US Right, which regarded the reopened prosecution as a case of political correctness and mob pressure. Over the months from indictment to trial, rhetoric has ramped up, from political virulence to outright and vile racism about young black men. For most of the black community, and a fair few others as well, it was a racist killing by a man gripped with the racial hatred and fear that is part of the contemporary US. And for most in between, it was bewildering that an armed man could shoot dead an unarmed man, after running him down, defend himself (in part) on a “stand your ground” law, and not be guilty of anything.

Had it been two white guys, the case would be alarming enough, a measure of the anarchy created when a right to bear arms comes up against a society so divided and afeared of itself that a safe public space is essentially dissolved. The effect of Florida’s gun laws — which combine concealed carry permits with “stand your ground” — is that you have to be armed to have basic parity. Had Martin had a gun, the line goes, there would have been a stand-off, and Zimmerman would have backed away.

Quite aside from being a dismal view of the good society — where a 7-Eleven run requires lethal force — Martin could not legally have owned a gun. One of the few laws Florida has is that you have to be 18 to carry a gun. Given that 16- to 18-year-olds are those whom fear-strangled Americans most fear, that makes it open season on young men of any colour. But of course no one believes a young black man could use concealed carry or “stand your ground” laws with anything approaching fair treatment. Had an 18-year-old Martin carried a gun, he would have been spread-eagled over a cop car hood before you could say Jim Crow. The laws as they stand, in US culture as it is, have only one message for black men: you should die.

Some have suggested prosecutors — who wanted either a spectacular win or a loss that could then be blamed on society as a whole — could have got a manslaughter conviction, galling as that would be — given Zimmerman had chased after Martin and created the confrontation. That was confirmed to some degree by juror “B37”, who said the jury had initially been split. It was also deconfirmed by the same juror, an interview with whom revealed her to be utterly addled in her reasoning about the trial — some vague guff about them being both to blame — with the strong suspicion that she saw a white-Hispanic guy with a gun and an unarmed black kid as a fair fight.

The Martin case illustrates the terrible dilemma the US faces. Its root problem is mutual fear and mistrust — frequently but not exclusively race-based — but the only available ways of dealing with it make things worse. Had the Martin case occurred in 1963, it would be a multimedia page in a school textbook, illustrating the terrible legacy America was moving away from. To find it still occurring in the detritus of 2010s America, gated communities and wannabee cops, middle-class social fraying and squawk box media, is immensely depressing, because there is no promised land over the horizon, simply the long slog of making things less worse, or stopping them getting worse as fast as they otherwise would.

It is deeply dispiriting, and even yesterday’s victory on the Senate filibuster — finally limited in scope, allowing the Obama administration to get some of its appointments made — makes little compensation. An era of crapness indeed.

While there are indeed many disturbing facets about the case (and its finding), it seems highly convenient that Zimmerman is referred to here as ‘white’. Why? Because statistics bear out that African-American AND Hispanic people tend to get a rough deal with the justice system. The fact that Zimmerman himself belongs to a persecuted minority kind of ruins the narrative somewhat.

At least in some contexts Hispanics refer to themselves as ‘white Hispanic’.

Excellent article. The main cause of consternation for me was that the jury said it was OK to kill someone because you were scared. That’s not what self defence is! If they believed Zimmerman’s varied stories about his intent at the time of pulling the trigger, they could have returned an alternative verdict of manslaughter.

To acquit him entirely is just bewildering.

It’s impossible to determine from this distance whether the jury got it right or wrong. Unless you were there to hear all the evidence the it is merely speculation and probably some bias. What is concerning however is the fact that Z could legally carry a gun, chase someone, and then shoot them. It may have been justified self defence, but I’d wager that Z would not have chased down M without his gun & therefore the event would never have happened. One thing GWH got right was gun control legislation in Aust & I thank him for that.

Arguably the jury was right, and the law itself is the travesty. The most glaring problem would be that one can feel “threatened”, enter into a confrontation, and only then produce a concealed weapon, and discharge it. Really as soon as a weapon is produced, any right to feel threatened should be voided. ie produce the weapon early, or not at all.