Don't believe a word politicians say; their policies aren't worth the paper they're written on. Plus other political views noted along the way.

The truth about political promises. They actually don’t mean a thing. None of the things Labor, the Liberals, the Greens or any other of the 50 or so other parties solemnly spell out their policies can actually guarantee anything. For except in the rarest of circumstances we will not have a government that can govern in its own right.

For an illustration of that look no further than this week’s Labor promise to put an early end to the carbon tax. Prime Minister Kevin Rudd might say yes, but when it comes to a vote Greens and Coalition Senators are quite likely to say no.

Spun out of control. As if charging a few extra thousand to sit with the Prime Minister at a meal-time was not bad enough, some bright spark in the Labor Party team thought trading favourable coverage on a website for a 10-minute interview with the great man was a good idea. At least the Rudd Labor team moved quickly to sack the promotional group that came up with the idea, which will minimise the damage — that is what you should do during a campaign when you stuff something up.

Perhaps more importantly, this episode gives us an insight into the way that public relations actually works, and it is not a pretty sight.

Political advice for the day that will largely go unheeded.

“I am reminded of some good advice one of our preeminent cricket writers, Gideon Haigh, gave the Australian cricket team last week. He urged the Australian players to ‘ dare to be dull’. Cautioning against the ‘ contagion’ of hype and ‘ wild and woolly’ batting. Similarly, for the … government, the task of reform to achieve growth is not about media spin and headlines … but the results and opportunities that disciplined financial management, improved competitiveness and growing our economy bring to investors, taxpayers and citizens.”

A reason for wanting dullness. Turn to the finance pages of the Fairfax tabloids this morning and you will see one very good reason for the NSW Premier fancying a quieter form of governing. There’s an update on how James Packer, who was recently given the go-ahead for a new casino development, is alleged to have suggested a dirty deal to the existing casino operator Echo Entertainment. 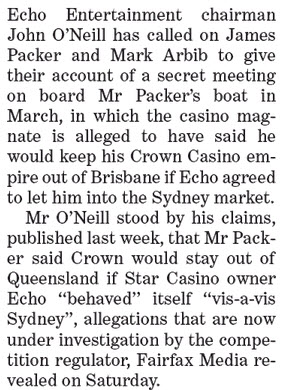 I guess the story gives us a clue to the O’Farrell meaning of “competitiveness”. 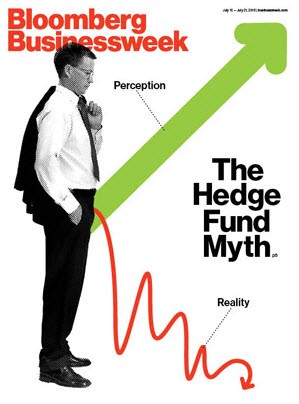 That Bloomberg Business News graphic is…meant to be hilarious, right? Not just a design oversight?