A group of community protesters are being sued by global food giant McDonald's for protesting at the Melbourne site where the company want to build a store. Crikey has obtained the full cache of court documents.

Crikey has obtained the full suite of writs, summonses and affidavits lodged against community activists protesting against the construction of a McDonald’s restaurant in the outer-eastern Melbourne hamlet of Tecoma.

The fast food giant is suing the so-called “Tecoma Eight” for occupying the roof of the building set to be demolished to build the controversial store or for “wrongly interfering with McDonald’s use and enjoyment of the McDonald’s Land”.

The writ states that McDonald’s, which makes $5 billion a year globally, will seek unspecified damages and costs and wide-ranging injunctions against the protesters either remaining on or entering the site and using social media to prosecute their campaign.

Four of the eight fronted the Victorian Supreme Court this morning and heard that McDonald’s blue-chip law firm Norton Rose Fulbright would seek to make one protester, Janine Watson, “representative” of the roof dwellers while the seventh defendant, Marcia Stewart, would represent protesters blocking access to the construction site. This would allow the court to place blanket notices at Tecoma to ward off all dissenters without having to specify the names of individuals.

The other four named in the writ were not served and did not appear because Norton Rose were unable to track down their home addresses.

UPDATE: Judge Emilios Kyrou ordered today, in wide-ranging 10-point directive, that until August 1, all those persons who entered the site between July 1 and July 17 or who impeded access to the site, be barred from the site and areas adjacent to it. They are also prohibited to”abuse, threaten, harrass, intimidate or physically harm” anyone on or entering the site, to throw anything into the site, to damage any locks or entrances to the site, to damage or “interfere” with a vehicle or a person accessing the site, or to cause, induce or incite someone else to do anything of the above. The judge said criticism of the proposal would be allowed on social media but social media cannot be used as a “call to arms”. A copy of the order will be affixed to the site imminently.

On August 1, the court will reconvene to let the defendents give their side of the story. But in the interim they’re banned and will be arrested and charged with contempt of court if they breach the order or encourage others to do so.

A spokesperson for anti-McDonald’s group BurgerOff, Garry Muratore, told Crikey this morning that the case was about “intimidation …we had one solicitor looking after two protesters and and two people looking after themselves and they had QCs with bulging folders and teams of advisers”. 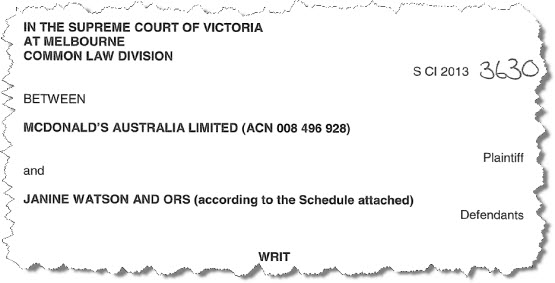 In official court documents, the takeaway conglomerate drops some clues about the amount of cash it will be hoping to claw back. In a affidavit obtained by Crikey, McDonald’s chief financial officer Andrew Gregory estimates that for each day the restaurant remains closed beyond a projected December opening date, around $3000-4000 would be lost in cash flow. Gregory reveals the average McDonald’s restaurant has sales of $10,000 a day. Holding costs and land tax at the Tecoma site apparently cost the corporation $123.50 a day. The edifice is currently about 20 days behind schedule.

An affidavit lodged by McDonald’s Victorian development manager Ken Pryor says the restaurant is currently incurring “halted construction costs” of $13,000 a week. The Construction, Forestry, Mining and Energy Union walked off the job on July 3, saying residents’ concerns should be addressed before they returned to work. Pryor claims security guards at the site are setting the chain back $55,600 a week.

In another document, prepared by Norton Rose lawyer Zoe Justice, personal Facebook “mobile uploads” are cited as evidence — with the firm justifying its snooping by saying the pics were publicly accessible. Media interviews, transcripts and eyewitness accounts are trawled for names and evidence.

In a statement released yesterday, McDonald’s claims it:

“… needed to seek relief from the court so that we can safely build our restaurant in accordance with planning approval This means removing those trespassing on the roof and those obstructing movement to and from the site.”

Muratore told the ABC yesterday the action was “bizarre” and claims the corporation is refusing to meet with the protesters. “They refuse to engage us but they’re happy to engage us through the courts,” he said.

And this story right next to one of those click a voucher coupon thing for $2 off chicken burgers at Kingsley’s. I love the irony.

The 8 people who will be at the supreme court Thursday at 8am deserve to be there. Tresspass last time I looked was against the law.

Its a wake up call for some multinational corps like mcd and starbucks etc that they are not always welcome. Bravo. You can keep them out.

I’m amazed that there are still educated people out there who believe that if you have little money you will win a case gainst those that have much.

People are still trying to get back money which they lost due to illegal actions by banks worldwide.

Only a naive fool would consider “the law” these days is a just and fair method to rule society.