Labor has skillfully painted itself as the moderate party on climate change. Plus other political views noted along the way.

Clearing of the electoral decks continues. Labor has strung out very skilfully the stories about its decision to bring an early end to its carbon tax. They were well and truly previewed for days before this morning’s formal announcement by Prime Minister Kevin Rudd. The rather prolonged procedure means the message might actually start to get through to the public.

An expected angry response from the Greens to some of the measures being taken to pay for the loss of carbon tax revenue will also do Labor no harm. Labor, with its “new” commitment to a market-based system for pricing carbon emissions attacked from both ends of the political spectrum, should be able to present itself as having the sensible middle policy position.

The quote of the day

Being a smart alec. Tony Abbott obviously forgets that, as he has said so often, the Liberal Party is a broad church. There are within it many members concerned about the impact of carbon emissions on global warming and the future of the planet. Including the man he beat so narrowly for the leadership on this very issue of climate change and how to handle it. Malcolm Turnbull wanted the Coalition to stick to the proposal for an emissions trading scheme that his predecessor, John Howard, had proposed. Abbott wanted none of that nonsense but hid his scepticism behind support for an expensive non-market “solution.” Yesterday he chose to veer again back towards the climate change deniers with his glib clip about CO2 being an invisible substance as if this made it something of no consequence. It was a stupidly provocative thing to say for all those Liberals who agree with the Turnbull-Howard position. And especially so when the polls overwhelmingly show that he is far less popular with the public than Turnbull. The Opposition Leader should be thankful that Labor waited so long to install Kevin Rudd. Had the party done the sensible thing back in February it would have been him recently removed from a leader’s role by a desperate party, rather than Julia Gillard.

What a pity he’s not here. Factory visits with fluoro vests and funny hats. Bike rides and morning walks. Babies, children then more babies. Election campaign photo opportunities get so boring. Oh, for a Vladimir Putin to provide a bit of variety. Like this effort from The Wall Street Journal, where the Russian president did a little deep sea diving. 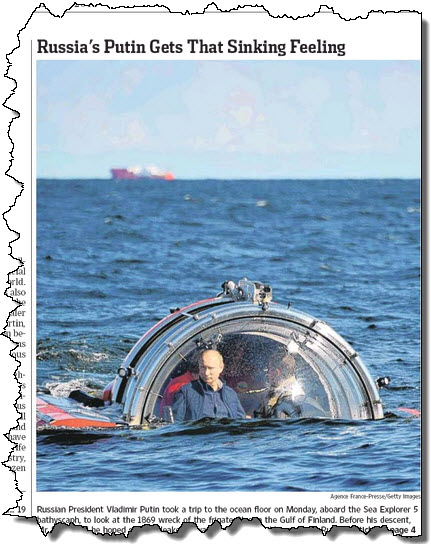 Now that’s what I call an opportunity worthy of a photo.

Dearie, dearie me. It is no wonder that the share price of Treasury Wine Estates crashed yesterday. How could any investor have confidence in a chief executive who  resorts to marketing jargon like David Dearie? “Masstige“. That was the word he used yesterday to describe his company’s ” mass market prestige” brands. Max Schubert, the winemaker who developed Treasury’s most revered wine, is surely turning in his grave at the thought that his Grange inheritance is now in such a man’s hands.