Turns out Aussie voters don't hate Labor, they hated Julia Gillard. Could Labor actually win this thing? Plus other political snippets noted along the way.

A harsh judgment from the polls. It is now clear that it was not the Labor Party per se that Australian voters were rejecting for most of the last three years. It was Julia Gillard’s personal unpopularity dragging the support down to levels where a crushing defeat seemed inevitable. With her gone, and Kevin Rudd again Prime Minister, all of the major pollsters are showing the election race is now close.

The improvement in the polls is reflected in the Crikey Election Indicator. The gap has narrowed considerably. 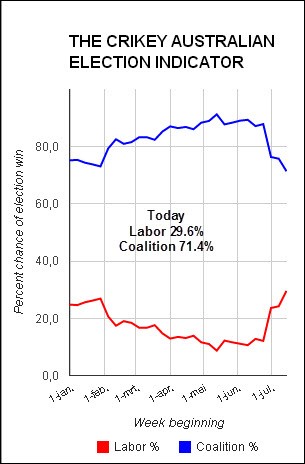 A dash of class warfare. Prime Minister Kevin Rudd might be scurrying to shed any suggestion of Labor engaging in class warfare, but the Greens are happy to move into the space. Only a party that knows it is not running in this election to actually become the government would dare to make increasing an income tax rate a key policy.

But that is what Greens leader Christine Milne has promised. Creating a new top income tax rate of 50% for millionaires, she said this morning, would pay for a $50-a-week increase to Newstart and a $90-a-week increase for single parents. And, for good measure, the Greens want a new tax of 0.2% on the four major banks’ assets over $100 billion, which would raise $8.4 billion over three years.

The power of the sun. Now I know that those in the insurance business have a vested interest in encouraging us to worry about things, but I know as well that events that seem to come from nowhere can upset the best-laid plans of men. So a report from Lloyd’s of London titled Solar Storm Risk to the North American Electric Grid is worth more than a passing glance.

The report asks us to think about what would happen if there were another event like that of 1859 known as the Carrington Event, when the sun unleashed a large coronal mass ejection, a burst of charged plasma aimed directly at the Earth that triggered an especially fierce geomagnetic storm that lit up the sky and frazzled communication wires around the world. 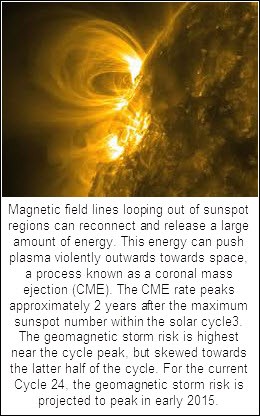 From the report’s executive summary:

“A Carrington-level, extreme geomagnetic storm is almost inevitable in the future. While the probability of an extreme storm occurring is relatively low at any given time, it is almost inevitable that one will occur eventually. Historical auroral records suggest a return period of 50 years for Quebec-level storms and 150 years for very extreme storms, such as the Carrington Event that occurred 154 years ago …

The total U.S. population at risk of extended power outage from a Carrington-level storm is between 20-40 million, with durations of 16 days to 1-2 years. The duration of outages will depend largely on the availability of spare replacement transformers. If new transformers need to be ordered, the lead-time is likely to be a minimum of five months. The total economic cost for such a scenario is estimated at $0.6-2.6 trillion USD (see Appendix).

A reminder for the day.

“The first rule of being a political junkie is to always remember that you are a very weird person, and most people are not like you.” 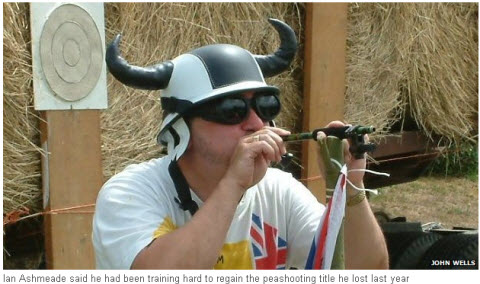 I note with interest that in the “Crikey Australian Election Indicator” the abbreviated names for Feb, March and May were shown as fab, mrt and mai resp. Why is this so?