Poll Bludger’s seat of the week: Dobell, Thomson’s to lose

Held by troubled Labor-turned-independent MP Craig Thomson, Dobell covers the urban areas around Tuggerah Lake just beyond the northern coastal reaches of Sydney, including the coastal retirement haven of The Entrance, lower-income Wyong on the interior side, the tourist area from Bateau Bay south through Wamberal to Terrigal, the demographically unremarkable northern Gosford suburbs of […]

Held by troubled Labor-turned-independent MP Craig Thomson, Dobell covers the urban areas around Tuggerah Lake just beyond the northern coastal reaches of Sydney, including the coastal retirement haven of The Entrance, lower-income Wyong on the interior side, the tourist area from Bateau Bay south through Wamberal to Terrigal, the demographically unremarkable northern Gosford suburbs of Lisarow and Wyoming, and state forest further inland.

Terrigal and its immediate surrounds are strong for the Liberals, forming the basis of a fairly safe seat at state level, while the Gosford area and the electorate’s central and northern regions have traditionally been finely balanced. 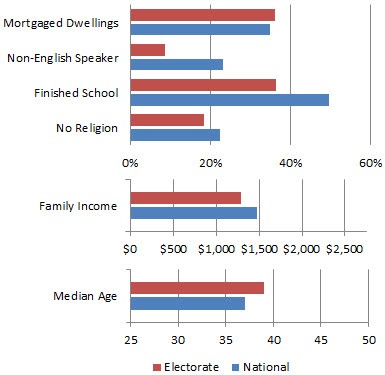 Dobell was created with the enlargement of Parliament in 1984 and held from then until 2001 by Michael Lee, who served in cabinet through the final term of the Keating government. Lee survived a 6.7% swing amid Labor’s 1996 election defeat to hold on by 117 votes, but a 1.8% redistribution shift in favour of the Liberals would prove decisive at the 2001 election, when Liberal candidate Ken Ticehurst picked up a 1.9% swing to prevail by 560 votes. Ticehurst substantially consolidated his hold with a 5.5% swing at the 2004 election, but even this proved insufficient to stave off an 8.7% swing to Labor in 2007.

The seat has since been held by Thomson, who had previously been national secretary of the Health Services Union. After surviving a preselection challenge by local union official David Mehan, Thomson became one of only four New South Wales Labor MPs to pick up a swing at the 2010 election, his margin increasing from 3.9% to 5.1%. However, his political career began to unravel the following June after he withdrew a defamation action against The Age over its reporting of allegations related to his union credit card. A lengthy Fair Work Australia investigation into the union ended with civil proceedings being launched against Thomson in October 2012, with fraud and theft charges following in early 2013. 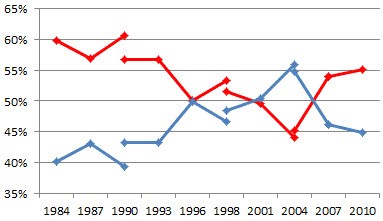 Thomson’s membership of the ALP was suspended in April 2012, and in May he announced he had resigned from the party to stand as an independent. After delaying preselection proceedings until this time, Labor finally endorsed Trevor Drake, a former deputy mayor of Gosford who had been a Liberal Party member between 2004 and 2008.

An initial Liberal Party preselection in December 2011 was won by Gary Whitaker, former Hornsby Shire councillor and managing director of a local educational services company. Whitaker prevailed over WorkCover public servant Karen McNamara, in what was reported as a defeat for the Right faction forces associated with state upper house MP David Clarke and the locally powerful member for Terrigal, Chris Hartcher. However, Whitaker soon faced trouble over allegations he had lived for several years without council permission in an “ensuite shed” on his Wyong Creek property while awaiting approval to build a house there. The following April, the party’s state executive voted to dump Whitaker as candidate and install McNamara in his place.

Lisarow and Wyoming are NOT unremarkable northern Gosford suburbs. Some fine people live there.

He said demographically unremarkable Suzanne. Having grown up next door in Narara, I can’t help but agree.