The Rudd experiment has worked, fresh polling from Essential has found. Kevin Rudd is more popular than Gillard or Abbott, and Labor is back in the game at the election. But there is one note of caution for a resurgent Rudd in the numbers ... 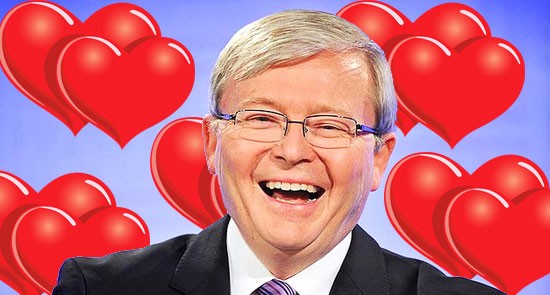 Love him or hate him, there’s no denying the Rudd renaissance has worked — at least for now.

Fresh polling from Essential Research shows the public prefers Kevin Rudd 2.0 to his predecessor Julia Gillard, they prefer Rudd to Tony Abbott, and the end result is that Labor has a significantly better chance of victory come election day.

Other polls have found similar trends, inspiring the commentariat to suggest Labor is likely to go for an election sooner — in August or September — rather than waiting until later in the year, when Labor’s honeymoon might have soured.

Essential’s online poll of just over 1000 people conducted late last week shows Labor has lifted four points in the primary vote to 39%, compared with just before the June Rudd coup.The Coalition is now on 46% and the Greens have dropped to 7%. That means Labor is now polling better on the primary vote than it did at the 2010 federal election (when the ALP nabbed 38% of the vote, tied with the Coalition and cobbled together a minority government).

But Rudd’s 39% primary result doesn’t put him on track to win just yet. The two-party preferred result is 52-48% in the Coalition’s favour (there’s been a big drop in the Greens vote since the last election). This 2PP result might translate as victory for Opposition Leader Tony Abbott, but it shows Labor is back in the game.

The recycled Rudd, always something of a crowd favourite, is enjoying the kind of personal polling numbers that Gillard or Abbott could only dream of. His approval ratings are at 50% approve to 35% disapprove for a net positive result — which have been thin on the ground for Australian leaders in recent years. Then-PM Gillard was sitting on 37% approve to 54% disapprove a few weeks before she was deposed. However, there’s a cautionary tale in the numbers. According to Essential, in July 2010, shortly after Gillard became PM, she had better approval ratings than Rudd does now. Time will tell if his popularity has more longevity.

Rudd’s return has not greatly affected Abbott’s approval ratings, which sit at 39% approval to 51% disapproval, where they’ve been for four months.

When asked who would make the best PM, voters opted for Rudd — 50% — versus 35% for Abbott. Interestingly, 28% of Coalition voters answered “Rudd” or “don’t know” to that question, indicating Abbott is not a raging favourite even among his own camp. Greens voters far preferred Rudd to Abbott.

Another warning to Rudd is found in the numbers here, too, however. Shortly after Gillard took over from Rudd in 2010, her “preferred PM” numbers were better than Rudd’s are now.

Essential’s findings are broadly similar to a Nielsen poll in Fairfax newspapers today, although Nielsen’s numbers were more positive for Labor: the two parties were dead level on 50-50 in the two-party preferred. Nielsen put the Greens in a stronger position and the Coalition a little weaker, with a primary result of Labor 39%, the Coalition 44% and the Greens 9%.

Abbott’s problem is that people have stopped listening to him. He’s been too negative for too long.
When he pops up on TV we know he will saying No. He will be attacking someone. He will be telling us the world is about to end, just as he has been saying for years.
If he starts saying something different, we simply won’t believe him. He told us we could not believe him when he became Leader, and he has done nothing to change that perception.
Like Gillard, people have made their minds up about him.
Now the electorate has Rudd to listen to. He’s positive and optimistic.
The polls will only get worse for Abbott in the forthcoming weeks.
How long the Liberals put up with the prospect of losing the election, after expecting it to fall to them without needing to develop policies, will be fascinating.
And assuming the Liberals dump Abbott for Turnbull, I expect the Nationals to dump Truss for Joyce as well.

Agree, beachcomber. I always wondered how people really felt about Abbott’s monstering of Julia and his empty sloganeering. Sure, they were going to vote Julia out but not with vast joy, enthusiasm and idealism. Tony couldn’t win in 2010 when he really should have been able to if he ever could. 3 years of saying “Julia is a witch” leaves him stuck. Have a look at his “policies”. Christopher Pyne’s first job as Education Minister would be, I kid you not, to have an inquiry into what good teaching is. This after 3 years of being in charge of opposition education “policy”. He really doesn’t seem to have done much except scream abuse at Julia. I look forward to watching that crew’s sinking realisation that the election win isn’t certain.

I’m no cheerleader for the labor party, but I’m no fan of the mad monk either. Taking an unbiased view of the recent poll trending cannot suggest good news for the Coalition though.

However you read the numbers, either the voting public is very volatile in its preferences, not sold on the Abbott story, wanted to vote labour but couldn’t while Julia was in charge or will eventually drift back to the coalition before election (the so called sugar rush).

It could of course be a combination of all of these. The only certainty is that Abbott is not now an automatic shoe-in for the lodge anymore, I’m going to be fascinated to see how he deals with this new emerging paradigm

Abbott’s real problem is that he is a man of the 1950s who follows the teachings of the vile Santamaria-whose name wasn’t Robert at all. One of Santamaria’s precepts was if one hasn’t got the numbers, be vicious.

What a philosophy, Not!