Tough times at Seven. Freelance sound recordists at Channel Seven got a rude shock last month when they received a letter from the network’s chief financial officer outlining a new pay structure. The “significant cost pressures and unprecedented challenges” facing media companies, they learnt, means they’ll have to take a pay cut.

The letter outlines new maximum rates for the techies, with a day’s work with equipment included capped at $650. The letter also notes: “Charging at rates less than this maximum daily rate will be at your discretion and will be viewed favourably.” One outraged sound recordist estimated under the new rates could he could make up to $300 less per shift, though Seven sources say the soundies will still be getting a good deal under the new arrangement.

More offshoring claims. Tips has been running various reports on large firms outsourcing jobs overseas (or to workers who come from overseas on 457 visas), with attendant concerns about sacked workers in Australia. This from a banking mole:

“Westpac have outsourced (for ‘outsourced’ read ‘offshored’ a large amount of their IT processing to their ‘Resourcing Partners’, mainly TCS, Wipro and Infosys (IBM are also involved). These companies have been bringing in their Indian employees on 457 visas to sit next to ‘permanent’ Westpac staff in order to learn their jobs, so they can then take this knowledge back to India to train their colleagues up. The Westpac ‘permanent’ employees are then retrenched. Westpac have denied that this is happening, but the many IT staff who have been retrenched would dispute this.”

We put that to a Westpac spokeswoman, who said:

“We announced several months ago that a number of roles would move to our partners in India and the Philipines. These announcements have been widely reported in the mainstream media. Employees impacted have been offered retraining and redeployment.”

So it would seem the displaced local workers have not been retrenched. If you’re an affected worker, let us know what happened (and you can stay anonymous).

A spoonful of desperation. We know of one Fairfax employee at the company’s Melbourne bunker who has taken to carrying around a spoon in his pocket, such is the desperate shortage of cutlery in the building. It’s every man for himself at Media House, with hot-desking setting up a race each morning for the best positions and spoons to stir the coffee at a premium. We call on CEO Greg Hywood to intervene.

The Liberals need YOU! We’ve received many emails from readers bemused to receive this emailed plea to join the Liberal Party. 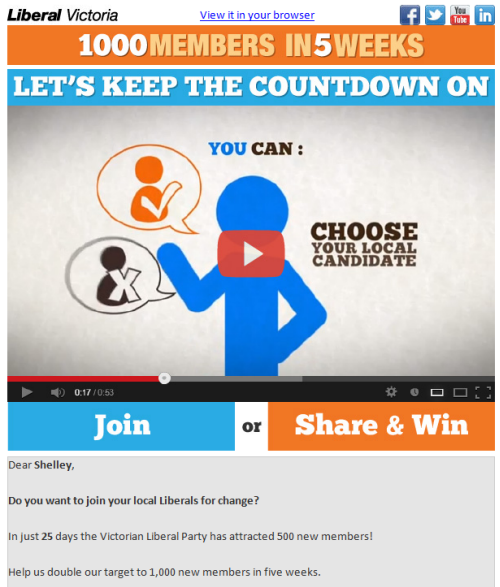 At the bottom of the email it says this, but our recipients seem confused about how they would have “opted in”:

One recipient, a card-carrying member of the ALP, looked into it further. “I gave them a call and it seems anyone who has ever had any dealings with the LNP is likely to end up on their mailing list. Spam spam spam!” the person said.