While Kevin Rudd strives for a Hawke-like political effect with a call for consensus, the productivity challenge he identified is real. 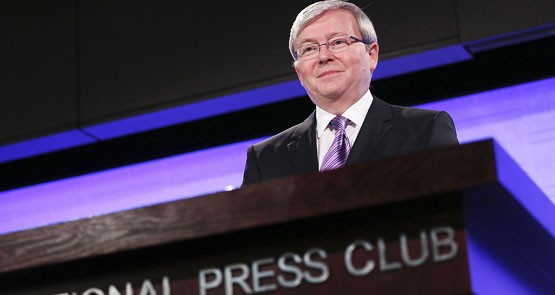 The obvious resonance for Prime Minister Kevin Rudd’s one-man debate at the National Press Club yesterday was the consensus era of Bob Hawke c.1983 — another leader, by the way, installed by Labor not long before an election in the hope of winning. Perhaps Max Gillies will again tour A Night of National Reconciliation.

Asked about the parallels, Rudd correctly pointed out that Hawke could rely on centralised wage-fixing in Labor’s accord with trade unions back then as a key element in Hawke’s strategy. He might have added that unions now cover significantly less of the Australian workforce than they did in 1983.

Still, the attempt to establish the groundwork for a less aggressive, more constructive approach to the challenges of an economic transition indeed owed much to Hawke, who would have won in a canter against Malcolm Fraser anyway but who cleverly played against type by talking about consensus in a period marked by industrial turmoil, recession and a broken wage-fixing model. And Rudd continued his clear differentiation with former PM Julia Gillard and former treasurer Wayne Swan by again pointedly rejecting “class warfare”.

There was, of course, never any “class warfare” from Gillard and Swan — that was a confection by News Corp papers. But it makes for handy, and symbolism-laden, rhetoric for Rudd, who is now using that confection to distinguish himself from his predecessor.

And Rudd’s productivity plan, to the extent it was outlined yesterday, is a mixed bag. There’s a demonstrable lurch to the Right in his words on electricity, with Rudd singling out “publicly owned transmission and distribution utilities” as a particular problem, and therefore suggesting privatisation was the best approach. The Prime Minister also singled out environmental approval processes and the need for a one-stop shop for projects (don’t politicians love a one-stop shop?!), alarming the Greens. Rudd also mentioned examining “any unintended rigidities arising in the labour market”, although the only example he singled out was greenfields agreements, where the Gillard government had already indicated an intention to follow the recommendations of the Fair Work Act review.

But Rudd also spoke about what has been, until recently, the productivity that dared not speak its name: business productivity. “Some bad industrial outcomes for some major projects can be the result of bad management decisions rather than union hostility,” he said, and singled out (again) Australia’s poor business relations with Indonesia — “this is a problem of Australian enterprise. Not a problem created by Australian unions.”

That sort of talk is anathema in the pages of The Australian, where a Treasury paper that illustrated the problem of poor management was decried as a example of politicisation. Inconveniently, the Business Council now agrees business productivity is an issue, as well as lazy workers and evil unions harming labour productivity.

As a combination of economic and political strategy, it was as solid as that crafted within Gillard’s office early this year, when she used the strength of the dollar as the spur for greater innovation. The dollar is, for the moment, no longer available to be used as a bogeyman to drive reform (and justify interventionist industry policy); handily, the passing of the peak of the mining boom can now play that role, which is what Rudd is using it for.

But unlike the high dollar, which was hammering trade-exposed businesses and forcing them to cut costs or go broke, the rhetoric about economic transition doesn’t have a real-world impact. The high dollar was helping to drive trade-exposed businesses to pursue higher productivity, and labour productivity has responded over the last 18 months, regardless of what governments did. Without the strong dollar, the drive to pursue productivity gains is likely to flag, leaving a challenge for whoever wins the coming election. Rudd’s rhetoric better be in earnest, rather than political positioning.

Productivity is an issue but there is no way that productivity can be increased in the 1990’s with more pressure on workers to work harder, filling their working day with ever more work. Australia is no up there among countries around the world in terms of intensity and time worked and can hardly go higher. The real solution is to get more highly automated production where workers act as skilled supervisors and this requires business to pull its finger out. Hopefully this is what Rudd means, and he has not intention of meeting business dreams about but the good old days of work choices where workers had to work harder for less pay.

I agree that it gets harder to improve productivity – and almost anything else – once one approaches the boundary of best performance.

I look forward to BK’s comment on General Motors’ bid to double their government subsidy.

There are definite productivity improvements that can be achieved. However, they’re on the micro level, not at a structural level.

For years, I’ve worked as a consultant in business process automation, helping streamline corporate procedures using software. It’s shocking how many companies I go into, and see several staff members devoting most of their time performing operations that can be wholly automated.

In most cases, the departments in question (particularly accounts) are complaining of having stretched resources, while up to half of their staff are performing mundane, repetitive operations that can be automated, with vastly improved speed and accuracy.

However, in some cases, there seems to be a reluctance from department managers to implement the systems needed to do this, due to the up-front, one-off costs, a general distrust of technology from some parties, and a fear of losing staff numbers as a result. They would rather have a staff member print and then transcribe data between systems, rather than having that conversion occur immediately, and with 100% accuracy in software.

If the Government is serious about improving productivity, then the best thing they can do is train more software engineers, provide grants for business process automation, and encourage companies to take advantage of these services. In most companies, up to a third of the back-office staff devote most of their time to tasks that could be wholly automated.

While cynics might say that they do not, like many service industries, actually produce anything, how many savings could be made if real-estate agencies were eliminated from the process of buying and selling houses?
Ultimately the lending agencies are intimately involved in the transactions and have an interest to efficiently absorb the “services” of the selling agents and keep the savings for themselves.
If the term productivity can actually be honestly applied to the service sector then perhaps the savings, to be made by eliminating an unneccessary drain on expenses, could be measured as a “productivity” increase.
Is the lack of any real productivity, outside primary and secondary industry a problem, for those making the measurements?
Mr Keane, for example has an “output” certainly, but does it actually measure anything that could be termed productive, productive of “What”, to be particular?
Only then might the produce be refined, improved etc.
Otherwise, without any reliable criteria for a product as such, then the general output of the Parliamentary Press Galleries, for example, cannot be distinguished from the waste of animals, which can, at least, be utilised as fertiliser.
So, in general, are the unproductive, so-called “service” sectors a “waste” of time, space and opportunity and an ultimate burden on the productive sectors of society as the Father of Economics, Adam Smith, argued some centuries ago?
Perhaps, instead of having been ruthlessly eliminated, the service industries have entrenched themselves and become the parasitic masters rather than the servants of the productive sectors.
German manufacturers are self-financing and remain the masters of their productivity.
In Australia the productive sectors seem to be choking, in comparison, on the excrement of the self-serving service sectors, with the mainstream media being the most obvious example of “output” productive of nothing, or worse than nothing, particulary with their three years of reporting of the policies of the alternative government.
No wonder they are down there with real-estate agents in the public estimation, according to those “polls”.

So here we have a government, via its Prime Minister, “producing” information and directing it towards a service industry gathering called the National Press Club, whose service is, apparently, translate the intentions, etc, of the public’s parliamentary representatives to the public themselves.
We have seen thre or more years where the “products” of government have been traduced, distorted, ignored and generally mangled beyond all recognition as the “measurable” product of this so called “service industry” of the mainstream media.
Why doesn’t the government just bite the bullet and eliminate the manglers and speak directly to the public itself?
Or is the media like the old man who tricked Sinbad the Sailor into giving him a ride across a swollen river, only to find the old man will strangle him and casually defecate and unrinate all over him rather than abandon his position of advantage.
Whatever Sinbad did to get rid of the the “Old Man of the Media?” the people and their representaives should try on the MSM.
Bound to increase productivity.