Australia's new Treasurer found he had more than a few friends in high places eager to see and be seen at his book launch.

It’s amazing what a difference a few weeks make. When Chris Bowen’s book, Hearts and Minds: A Blueprint for Modern Labor, was on the presses, he was hiding on the backbench, licking his wounds. Melbourne University Publishing was planning a modest launch of his book, expecting a few honest citizens of Wetherill Park along with the members of Bowen’s family to turn up.

But then the Second Coming of Kevin happened, and the publishers doubled the catering. There’s nothing like being elevated to Treasurer of Australia to bring out a few new friends, and this morning in Sydney the room was packed with men in dark suits, all eagerly buying multiple copies of the book. From Parliament, Senator Kim Carr and  MP Jason Clare also came, along with Senator Matt Thistlethwaite.

Bowen said that when he had resigned in March, in sympathy with Kevin, he had never expected to be returning to a ministerial position this term, or indeed ever. However, he had told himself he wasn’t “going to mope on the backbench” and needed to resume normal life. Two days after stepping down, he was wandering aimlessly around his local Stocklands shopping centre, chatting to constituents, when he received a text message from MUP’s Louise Adler suggesting he write a book.

He agreed, quickly deciding he now had three priorities: he needed to lose weight, write a book and win his seat at the next election. Two of these aims had been realised, he said, and the third was under way. 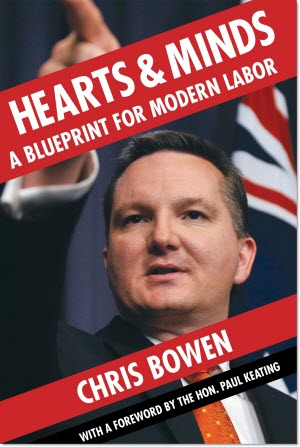 There was only one problem: he no longer had the ministerial laptop, and so the book was written on the laptop belonging to his eight-year-old daughter, Grace — duly thanked in the speeches.

News Corp Australia supremo Kim Williams launched the book and said that while writing his speech he had reached up into his library and reread a copy of Lenin’s pamphlet, “What is to Be Done?”, and isn’t that an exquisite image? Although, as the son-in-law of a former Labor PM, he probably has more than one copy.

Bowen has written in the book that one of the major reforms that needs to be implemented is a more democratic election of the parliamentary leader, calling for the rank-and-file to have a say. Of course, Rudd has already announced this reform, leading Adler to say that this was the first book whose suggestions were implemented before it was even published.

However, Bowen said, party reform was not enough; Labor needed to be clear about what it believed in, and say it very clearly.

The final pargraphs of the book sounds very much like the speech Rudd delivered to the Press Club in Canberra this week:

“Labor is the only party that believes in both a stronger Australia through higher economic growth and a fairer Australia by giving everyone a better chance of making the most of that growth.

“Labor has a good story to tell. We have a compelling case to make. It’s up to us to make it.”