Everyone's talking about Ashes debutante Ashton Agar's brilliant knock overnight. The Daily Telegraph shoehorned the story onto the front page but it was buried in The Sydney Morning Herald.

Memo from The Oz. The Australian‘s business editor, Geoff Elliott, sent this email to his staff praising them for their scoops and bidding farewell to those leaving the company

What a great couple of weeks it’s been for scoops. I won’t name any individuals — as a team we’ve played a blinder: in journalism and in showcasing the yarns with great production, in print and online. Thanks all very much.

What we do is one of the core strengths of The Australian.

I also acknowledge this great effort has been achieved during an unsettling week or two. I would like to personally wish Katherine and Lisa all the very best, they will be greatly missed as colleagues. For the Sydney crew let’s have a few drinks tonight to toast what I’m sure will be their successful future.

Drinks will also be held tonight in Melbourne for senior writer Stuart Rintoul, who is leaving The Oz after more than 15 years of service.

A Test of Sydney papers. The news pretensions of the management of The Sydney Morning Herald have been exposed this morning with their non-coverage of the thrilling Ashton Agar heroics on day two of the first Test from Trent Bridge. Nothing on page one of the edition in Sydney’s inner eastern and western suburbs, nor any mention on the back page where sports coverage starts. The only mention of part of his innings was a story from Chloe Saltau on the bottom of page 49, under extensive coverage of day one! The story was written up to lunch in the Test, with Agar not out 69. He went on to score 98 and broke all manner of records … 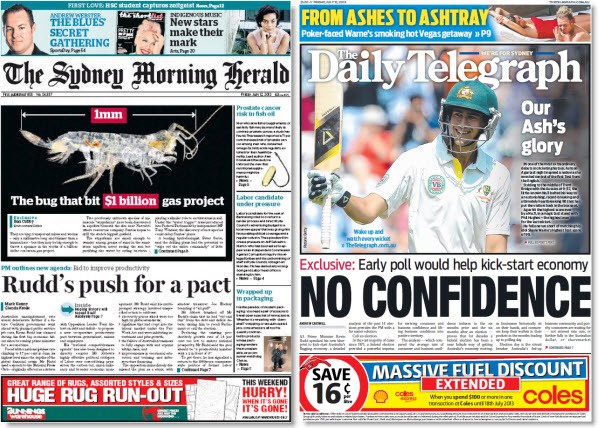 Contrast that with The Daily Telegraph: coverage on page one (a near full-page pic) and a big pic on the back page at the start of the sports story. The page one write-off with the pic included reference to his final score and the record innings for a number 11 batsman and the record partnership with Hughes. Bean counters or just a confused and hopeless production system might be the excuse trotted out, but for all its faults The Tele and its managers know a good news story when it falls into their lap. — Glenn Dyer

“What connection did the current member for Lalor have with the electorate before winning preselection? #JustSaying #auspol“

Gillard, just like this week’s parachuted Lalor contender Lisa Clutterham, was from South Australia and virtually unknown in the electorate. But by ratting on the Socialist Left she managed to gather the support of powerbrokers inside Stephen Conroy’s Labor Unity faction to add to Martin Ferguson’s Independent Left group. The rats then got support from Unity in a bunch of state seats and returned the favour at the 1999 Holt byelection, where Unity-aligned Jacinta Collins adviser Anthony Byrne triumphed over the Left’s Jill Hennessy. Amusingly, one of the grass roots campaigns that Gillard hitched her wagon to to convince 300 local members of her suitability for office was the Werribee toxic waste dump also opposed by her recent pick to succeed her, local school teacher Joanne Ryan. — Andrew Crook

Get Fact: soothsayer stumbles. In this age of serious and sustained fact-checking it doesn’t seem right for there to be facts out there lying around unchecked. Today, we examine the claims of Spotswood psychic Grant Watson on the Labor leadership as published in Fairfax’s Maribyrnong Weekly on January 19, 2011. Let’s go to the Weekly‘s archives: “PM Won’t Serve Full Term, Says Psychic”. In summary, Watson’s predictions were:

In summary, not a great hit rate for the Weekly and Grant Watson, who would have gotten away with it too if it weren’t for those damned fact-checkers. — Andrew Crook

Front page of the day. With characteristic subtlety, The Sun has weighed in on former England footballer Paul Gasgoine’s battle with alcoholism. Yesterday’s front page was a “cut out and keep” poster warning landlord, shop keepers and fans not to shout Gasgoine a drink. An accompanying editorial reads: “Once, Gazza inspired the nation. Maybe the nation can save him”. 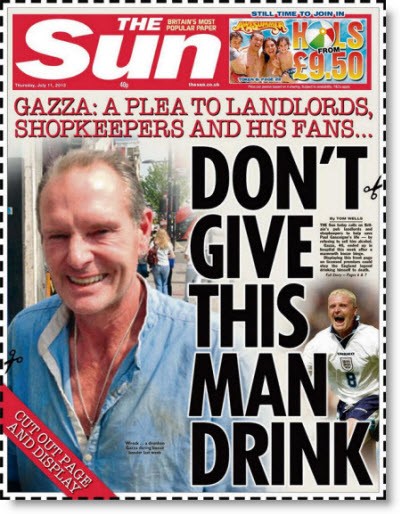 Get Fact: is the car industry right on fringe benefits changes?

Get Fact: how many asylum seekers turn up without ID?

Re: SMH lack of coverage re Ashton Agar compared to the Tele:
Ashes coverage was also a bit slow on ABC Radio – the 10.00pm news last night had Australia 9/151- still 64 runs behind, just after they crossed from live cricket coverage with Australia 9/229 and leading by 14.