Two prominent climate sceptics have lost their jobs with their respective universities. As Andrew Bolt cries 'censorship', Crikey looks more closely at the story of Murry Salby and Bob Carter.

Two darlings of Australia’s climate sceptic movement have been dumped by their universities, sparking charges of academic censorship from the blogosphere.

The cull makes it harder for the sceptic movement to use academics to push its case by appearing at parliamentary hearings, speaking at events and writing opinion pieces for newspapers.

Australia’s climate sceptic movement — from Andrew Bolt and Alan Jones to the Sydney Institute and the Coalition’s sceptic rump — has relied on a small pool of academics who cast doubt on the science of anthropogenic global warming (i.e. climate change caused by humanity’s greenhouse gas emissions). These academics are usually male, usually older, are often geologists and are sometimes semi-retired. Some have published little on climate in peer-reviewed academic publications.

Now that pool is two men smaller. Professor Murry Salby has been controversially terminated by Macquarie University, and Professor Bob Carter, who was an adjunct research fellow at James Cook University, has also been axed (the university says his term expired).

Both universities say the terminations had nothing to do with the men’s outspoken views that humanity’s emissions are not affecting the climate in any serious way. Both men have indicated they think their climate views were in part behind the decisions (read Salby’s claims here and Carter’s here).

Sceptic HQ is outraged. News Corp writer Andrew Bolt says Salby has been punished and persecuted for challenging “the global warming faith”. Blogger JoNova says Carter has been “blackballed … because he speaks outside the permitted doctrine”. The popular blog Wattsupwiththat says “I’m beginning to think Australia is ground zero for AGW [anthropogenic global warming] crackpottery”, and the Salby case “illustrates the disturbing lengths a university will go to suppress ideas they don’t agree with”.

The Australian ran a sympathetic story by Graham Lloyd on page 5 today linking Salby’s sacking to his research on global warming and airing views by Salby’s supporters that the situation “raised questions about the culture of climate science and the difficulty many had accepting alternative views”.

The case of Salby is an interesting one that Crikey has monitored for some months. So what happened to him? Macquarie University says it terminated him because he refused to teach as required and breached the university’s travel rules. He claims he was treated poorly and denied resources, and links this to his research on greenhouse gas emissions. Salby, who has spoken twice at the Sydney Institute, hints his sacking might have been something to do with this op-ed in The Australian in April (he notes that some senior staff on the Climate Commission, which he criticises in the op ed, are also employed at Macquarie): 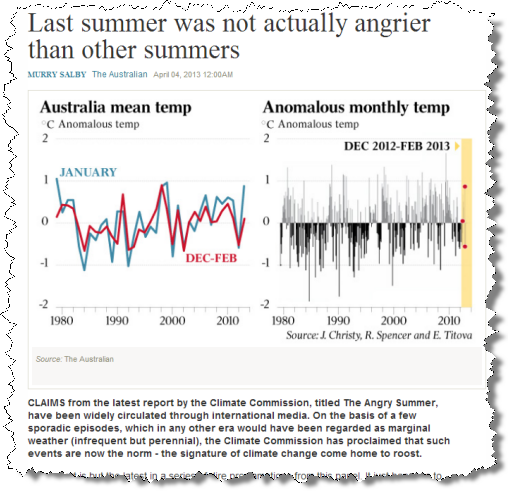 Crikey looked into this piece at the time because it makes some bold claims. The piece challenges a report by the government-funded Climate Commission that had said Australia’s 2012-2013 summer was hot and “angry” due in part to climate change. Salby claims temperature data from the Bureau of Meteorology is not robust, and he makes serious claims that the BOM’s temperature records are “routinely readjusted” in a manner that is opaque and “discretionary”. This claim, which could be interpreted to indicate the BOM is faking temperature data, incensed the bureau, which said this (read BOM’s seven-page response to Crikey’s enquiry here):

“The Bureau stands by its climate analysis that portrays the last Australian summer as exceptional. So many temperature records were broken over such a wide area of the continent during this summer past, that it is absurd to argue otherwise. The Bureau rejects assertions that surface based climate observations made and analysed by the Bureau of Meteorology are somehow fatally flawed.”

Salby presents his own graphs, which appear to show Australia’s summertime temperatures have not warmed in the last 30 years (see above). Crikey was interested in these graphs and contacted Salby and Macquarie University repeatedly by phone and email over a six-week period in April and May to find out where the data came from. Salby never responded — he was overseas on a lecture tour — and the university was not able to answer the question.

“I’m fairly certain this chart was derived from our satellite data … The satellite measures a deep layer, about surface to 10km altitude, so it is a rather robust measurement of atmospheric temperature … The traditional surface temperatures don’t always align with the deep atmosphere above, but over long periods (i.e. annual averages or so) they look quite similar.”

So Salby’s op-ed for The Australian, which claims to show that the climate is not warming insofar as Australian summers are not getting hotter, is based on records taken up to 10 kilometres above the earth’s surface, which “don’t always align” with temperatures on the earth’s surface.

So astronauts have no need to worry about climate change, then.

Most Universities have a code of practice or set of policies or mission statements which contain pledges of a commitment to excellence, or similar. Such clauses are meaningless if they can’t be invoked to get rid of people whose work is simply sloppy and substandard. I don’t know of detailed scrutiny of Salby or Carter’s work, but Professor Ian Plimer’s book “Heaven and Earth” has been analysed in detail and that detailed analysis makes it clear that, at the very least, the book is sloppy and substandard.

This has come not before time.

Salby’s refusal to teach (and thus face questioning?) or provide data substantiating his claims is pretty damning, by any productivity measure he is dead wood. Given that News Corp is a museum of white male dead wood, and their casual approach to facts, whats the bet that Salby &/or Carter end up there.

If you’re interested in the debate around Salby’s thesis on AGW, as detailed to the Sydney Institute in 2011, this post is not bad:

Re Liamj’s opining that Salby or Carter will end up in the Murdoch stable, Carter at least is such a well-known bore that even the dead white males of News would find his presence trying.

Better to leave him to is many directorships and other interests; he has plenty of other work in hand.

Salby is a complete unknown to me. If, as may be the case, the quantity and quality of his output was such as to not reach even the bar of acceptability of academia, then surely even News would baulk at putting him on the payroll.

Bolt may well be criticised on the basis of quality, but he makes up for any shortcomings there with quantity. Never-ending, unchanging, brain dead, drum beating quantity.