Bernanke’s caution and patience saving the US economy 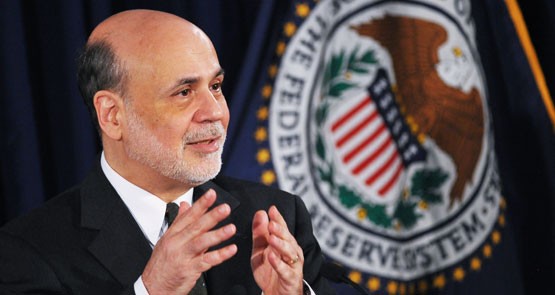 Hang onto your hats and let’s keep this momentum going.

While US Federal Reserve chairman Ben Bernanke didn’t exactly say these words yesterday after the US markets closed, he might as well have done so as he hosed down the market’s fears that the aggressive bond buying program that has been in place for the last couple of years would start to be wound back.

US sharemarkets have surged to new record highs on the back of that news, with further gains of around 1.5% this morning, which means that US stocks are up almost 7% in the last two weeks.

At the same time, the US dollar has weakened and the yield on government bonds has fallen back, although they remain substantially higher than the yield of a few months ago as the better economic news has underscored a generally bearish sentiment.

It is strikingly clear that Bernanke is not going to make the same mistakes that knee-capped each mini-recovery that emerged during the 1930s Great Depression, when policy-makers prematurely tightened policy on several occasions when there were tentative signs that the economy was improving.

As an academic specialist of the Great Depression, Bernanke is aware that the US economy is still vulnerable to a significant policy tightening, even though the run of news on housing, sentiment and jobs has been particularly positive.

During the Great Depression, it should be remembered, the unemployment rate in the US peaked at around 22%, and it averaged a staggering 16% in the 1930s.

In the lesser depression that the US economy is emerging from now, thanks to the radical and fearless monetary policy settings delivered by Bernanke, the unemployment rate peaked at 10% and since the market and economy crash started in 2008, the unemployment rate had averaged around 8%. On these facts alone, Bernanke should deserve unquestioned praise.

Bernanke’s comment that the Fed would maintain “highly accommodative monetary policy for the foreseeable future” sparked the mood swing on Wall Street.  As noted on above, this is appropriate, but what the market may be missing is what “highly accommodative” policy actually means, at least to the Federal Reserve. It is not unreasonable to think that holding interest rates near zero for the next couple of years is “accommodative”. It most certainly is.

Maintaining bond purchases is also obviously accommodative policy, but there could be a subtlety in Bernanke’s likely approach. If in coming months interest rates are held at zero (which is as certain as anyone can be on any policy setting), yet the Fed starts to scale back its $85 billion bond purchases a month to $75 billion, then $50 billion and so on, there is still no question that policy is still accommodative, but a little less than it was before.

This may be well understood in the bond market, where the fall in yields has not been all that marked — the 10-year government bond yield is down a moderate 5 basis points to 2.57%, having risen almost 50 basis points in the past month.

Suffice to say, if the stock market retains its current bullish tone, and more importantly if the hard economic data continues to confirm the fact that the economy is lifting to a trajectory of 3% GDP growth, the Fed will scale back its bond-buying program as a first step to normalising monetary policy. Policy will still be accommodative, but a little less so.

All of which shows that Bernanke is negotiating the Fed’s way through what will inevitably be a tricky transition from what was, and for the moment still is, the easiest setting for monetary policy the US has ever seen. The economy and markets may not like it when some of the super stimulus is withdrawn, and Bernanke knows this. But if he can take his time to adjust policy to a more normal setting and over that time the economy can build some further self-generating and self-sustaining economic growth, it will be a job well done.

Bernanke is not quite there yet, but a recovery is getting closer by the month. This is the best the US economy has looked in about five years.

I often wonder whether ‘quantitative easing’ is a magic pudding strategy that at best kicks the can down the road in the hope that history and good fortune will amortize the dubious assets and losses at some time in the future. The Japanese Central Bank did something vaguely similar with assets left over from the days when the Nikkei was at 38,000, in late 1989. Ho hum….

Here i was thinking independent media sources would give the people the full story. Its upsetting to see how uninformed even the independents are.

Agree with both posters to date.

This is schoolboy standard analysis, which I can’t even be bothered rebutting.

perhaps our critical posters could offer their own, far more insightful and analytical, takes on the situation, rather than just carping from the sidelines

Unlike the article’s author, why don’t you provide your insights with supporting data.