The ‘first lady/bloke’ dilemma: to work or not to work?

Should Labor win the election, Therese Rein may face pressure to dump her Australian business. Governance expert Stephen Bartos asks if 'first lady' is a full-time job -- or is it time to let prime ministerial partners live their own lives? 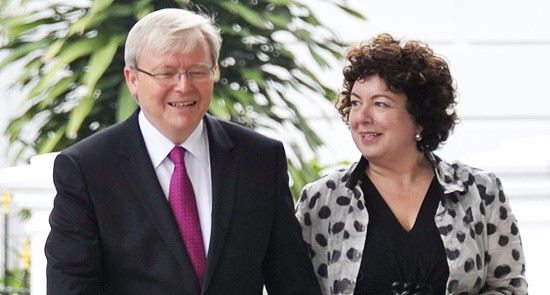 Should Kevin Rudd be re-elected prime minister by voters, would his wife, successful businesswoman Therese Rein, sell her Australian business interests? A survey of practices around the world shows she may be forced to — but the time may have come for a trailblazing prime ministerial partner to hold firm.

Last time Rudd was prime minister, Rein sold the Australian arm of her company Ingeus to avoid any perceptions of conflict of interest (Crikey reviewed Rein’s business past earlier this week). Prior to the sale Ingeus was one of the largest providers of employment services under the government’s Job Network program.

Rein still had extensive commercial interests overseas. Ingeus operates in many European countries, with extensive work in the United Kingdom, as well as Saudi Arabia, and South Korea. Ingeus re-entered the Australian market in October 2011 via the purchase of Assure Programs, a company that delivers organisational development and employee assistance services. For now, Rein is not making any changes. What about after the election?

Legally, there would be no reason for Rein or Ingeus to sell Assure after a Labor win. In terms of possible conflict of interest, Assure has said it does not bid for government contracts, and the company operates in a different space from the past job network business.

But conflict of interest is about perception as much as substance. Even if Assure does not bid for government work, some of its clients may. If they do, and a connection (however tenuous) is drawn back to decisions by a government minister, it could easily be portrayed as a conflict — even if there was no actual evidence.

Mud would be thrown. It would not be fair. Politics is not fair. It is about managing perceptions to advantage one side or another.

What is relevant is community standards about what is acceptable. These vary widely around the world.

In Australia, former prime minister Julia Gillard’s partner Tim Mathieson found it not viable to remain in his role as a real estate agent so took on a full-time support role. Past prime ministers’ wives have done the same.

“… someone needs to blaze the trail, and if anyone could do it, Therese Rein could.”

In the US, the wife of the president (no female incumbents so far) is designated First Lady and if she was employed before, she quits. The First Lady hosts parties, decorates the White House, and promotes charities. Unofficially, but often influentially, the First Lady might advise the president on policy and politics.

The role seems predetermined, regardless of the capabilities of the person concerned. Even someone as formidably competent as Hillary Rodham Clinton, later a senator and then secretary of state, took it on.

It is partly a consequence of the ferocious intensity of the US media focus on the president’s family — First Lady, First Dog, First Goldfish (OK, I made that last one up). Running a business would be impossible. Nothing could be done in confidence, no relationship built.

In the UK the scrutiny is less, but Samantha Cameron, wife of UK Prime Minister David Cameron, saw a need to quit her job as CEO of British luxury goods house Smythson and now has a part-time role as a consultant.

In the Nordic countries this sort of reticence is unknown. Jonina Leosdottir, wife of former Icelandic prime minister Johanna Siguradottir (the world’s first female PM married to a woman) remained an author; Norway’s Ingrid Schulerud is a diplomat despite her husband being prime minister; Filippa Reinfeldt in Sweden — the former wife of the PM — is an MP. Nordics have a long tradition that spouses of prime ministers can happily work. Conflict of interest is not an issue; they are seen as separate individuals.

Ho Ching, wife of Singapore’s Prime Minister Lee Hsien Loong, is head of government-owned investment company Temasek. Although Singapore maintains Temasek is wholly independent and run as a private firm, it is enmeshed with the government.

Australia, although some readers may prefer it to be closer to the Nordic countries, probably sits somewhere between US and British community standards. In our high-intensity media climate a prime ministerial spouse would have a hard time keeping a full-time business career. That does not mean it should not happen — someone needs to blaze the trail, and if anyone could do it, Therese Rein could.

It is hypothetical for now. No divestment will happen between now and an election: it would be unfair to the people and company, and selling a company takes time. If Rudd wins, though, the story may change. Community perceptions have to be managed.

Last week, an Assure spokesperson suggested: “Ms Rein could review her position if Mr Rudd won the upcoming election, depending on her work schedule.”

If the Coalition wins, or in the unlikely event of a Rudd landslide win, there would seem little reason for Rein to divest. If however he wins narrowly and has to manage negative media with every community mutter of disquiet, it could be a different story.

Life’s a box of chocolates for the Nationals — what flavour of scandal will we get next?

If Abbott became Prime Minister should Margie resign her position because the parents of her clients may be employed by the Government and therefore there may be a conflict of interest or insider trading or some other of benefit that I haven’t thought of yet.