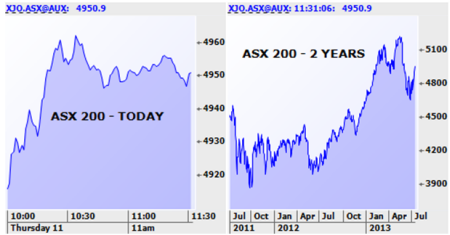 The Dow Jones finished down 9 but is expected to jump tonight after the speech by US Federal Reserve chairman Ben Bernanke this morning. The Dow was up 49 at best and down 41 at worst.

The Dow Futures were up from+21 to +101 this morning in the wake of the Bernanke speech after-hours in the US. The Bernanke message is that even if unemployment hits 6.5% they won’t necessarily raise rates… in other words policy could remain highly accommodative a lot longer than the market expects. It sort of passes the message that tapering of QE is somewhat less likely but he didn’t say that. The US$ has fallen (A$ up), Gold is up. See below for more.  The A$ bounced this morning on Bernanke’s speech. The Gold price has bounced as well.

The FOMC minutes out overnight saw about half of the Fed members believed it would be appropriate to bring asset purchases to a close late this year whilst others wanted to see more signs of improvement in the economy. The Minutes didn’t rule out tapering and gave the impression the Fed are on ‘data watch’. US Wholesale inventories were down 0.5% in May – the biggest decline since September 2011.

Bernanke’s caution and patience saving the US economy