Here's how The Daily Telegraph (owned by News Corp Australia) headlined the story that Rupert Murdoch has accepted a demand that he be recalled to face questioning by British MPs in relation to a leaked tape of him talking about paying police for stories.

Pressure mounts over hoax phone call. The pressure is on both the NSW Police and Southern Cross Austereo over the royal prank phone call that is becoming a enormous problem for the owners of 2DayFM in Sydney. London police have reportedly asked NSW police to consider laying charges over the call. Fairfax reports:

“Scotland Yard has officially asked Australian police to consider laying charges over the hoax phone call by 2Day FM radio DJs to a London hospital that was treating the Duchess of Cambridge for a pregnancy-related illness … A spokeswoman for the Metropolitan Police in London told Fairfax that on Tuesday this week they sent their file on the incident to the Australian Federal Police and New South Wales police.”

The problem for the NSW Police is that they have made no move to investigate the call and whether it broke the NSW Listening Devices Act 2007. The media regulator, the Australian Communications and Media Authority, believes it has, and made a preliminary finding to that effect last month — Southern Cross hared off to the Federal Court to block the ACMA finding. The case will be heard in September. Last month ACMA said:

“ACMA’s investigation is considering (among other matters) whether, in broadcasting that telephone call, Today FM breached the condition of its licence that a licensee must not use its broadcasting service in the commission of an offence (clause 8(1)(g) of Schedule 2 to the Broadcasting Services Act 1992). ACMA claims Today (2Day) FM  broke section 11.1 of the Act:

If the NSW Police find there has been a breach, ACMA’s case against Southern Cross and its subsidiary Today FM (who operates 2Day FM) is considerably bolstered — it could adversely affect Southern Cross’s broadcasting license for 2Day FM. That may in turn affect its TV licence. Southern Cross launched its action to stop the ACMA finding from being issued because it claimed the regulator was prosecutor, judge and jury. A prosecution from the NSW Police would neutralise that argument.

TV news and current affairs programs know they can’t do secret filming and recording for stories in NSW (that is filming and recording of people without the consent of their person or persons being filmed or recorded). It’s only allowed in Queensland and South Australia. So why can radio stations? The radio station is also being sued by Mel Grieg, one of the two radio announcers involved in the prank call. — Glenn Dyer

Murdoch just eager to help. Here’s how The Daily Telegraph (owned by News Corp Australia) headlined the story that Rupert Murdoch has accepted a demand that he be recalled to face questioning by British MPs in relation to a leaked tape of him talking about paying police for stories:

RESIDENTS will get a glimpse of council life from half a century ago when Mount Isa City Council celebrates its 50th birthday on Friday.

Marking the occasion with a reenactment of Council’s first meeting in 1963, the special anniversary event will see the regular Wednesday meeting moved in a one-off to Friday at the CWA Hall.

Past councillors have been invited to join with current councillors and residents are encouraged to come along.

Mayor Tony McGrady said it would be a great opportunity for community members to experience a piece of Mount Isa’s past and celebrate a notable milestone in the council’s history.

“Hair was big, ties were loud and colours were psychedelic when this council met for the first time in 1963,” Cr Mc Grady said.

“Fashions may have changed but council is still here and still going strong as we celebrate our 50th birthday and Mount Isa its 90th.” Cr McGrady said the minutes of the first council meeting will be read as past councillors and members of the public watch from the public gallery.

“It will be a fitting and novel way to mark our 50th and show how far the city has come.”

Were colours really psychedelic in 1963? LSD use in 1963 Australia was largely limited to the scientific community, and although there was some recreational use in the early ’60s, it certainly would not have made its way up to Mt Isa. Crikey rates this claim by Mayor McGrady as rubbish. On the other hand, it’s said that if you can remember the ’60s you weren’t really there — so Mayor McGrady might be telling the truth. — Andrew Crook

Front page of the day. The NT News takes the Territory’s departing Labor Senator Trish Crossin, who is on a taxpayer-funded trip to Paris and the UK with her husband. Crossin was annoyed when former PM Julia Gillard dumped her for “captain’s pick” Nova Peris earlier this year. Kevin Rudd flew to Darwin yesterday and commented on the controversial NT preselection — now we know why he didn’t intervene to reinstate Crossin. She was en France. Perhaps she will get that coveted ambassadorship after all? 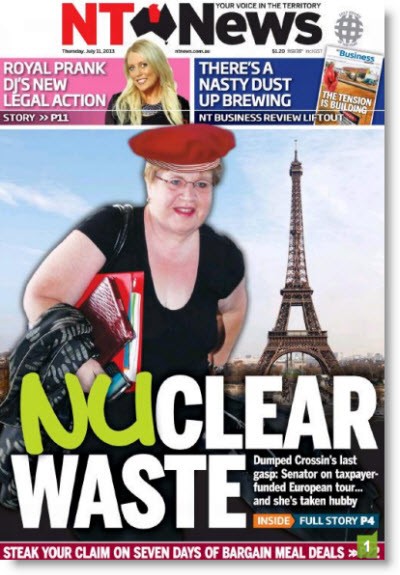 You don’t get Lou Reed

Yes yes, of course Murdoch is straining at the bit to return before a UK Parliamentary Inquiry, he must be beside himself waiting for the official invitation to arrive so he can start counting how many sleeps until his reappearance.

One suspects his best course of action is to convince them he’s developed Dissociative Identity Disorder ie: one personality vilifies the Metropolitan Police and the Inquiry’s Select Committee while the other couldn’t oblige them more.

Just like he’s helped the industry since he was helped to swallow so much of it – in return for PR protection services rendered?

The 1960s in Mt Isa are movingly evoked in Betty Collins’s classic novel The Copper Crucible. Well worth a read.