Australia's leading medical publications are helping to fund a campaign against self-education cuts -- despite hints of self-interest. Has it affected their coverage?

Media outlets have long used their front pages and editorials to crusade on behalf of their readers. But Australia’s leading medical publications have gone further by helping bankroll a campaign railing against the federal government’s plan to cap tax deductions for self-education expenses at $2000 a year.

Australian Doctor, which has implored its readers to sign the online petition opposing the cap, could be seen to have more than a little skin in this game. It runs a program of education seminars for GPs, most costing around $300. 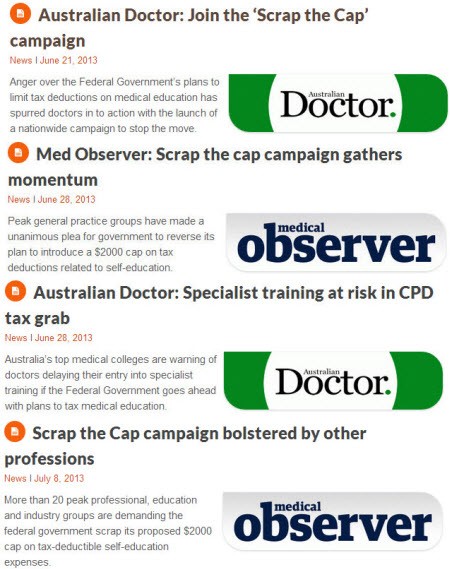 Antonio Bradley, a senior journalist at Australian Doctor, told Crikey the publication contributed a one-off payment of $500 to help set up the #scrapthecap website.

“We decided to co-sponsor the Scrap the Cap campaign because we wanted to support our readers, who are concerned the proposal will jeopardise their ability to educate themselves and provide high-quality care,” Bradley said. “We wanted to help GPs get their voices heard by the government.”

But he insisted Australian Doctor‘s financial involvement in the campaign — and the fact it runs paid educational seminars — hasn’t compromised its reporting: “Our support for GPs in this area hasn’t affected our coverage. We’re still covering the issue fairly and accurately … We advocate for GPs but not blindly.”

Bradley says the $2000 cap could potentially benefit the publication (which is free for healthcare professionals) because it also runs free online learning modules and its paid seminars are comparatively cheap. Deana Henn, the associate publisher of Medical Observer, did not respond to Crikey‘s requests for comment.

Denis Muller, an expert in media ethics at the University of Melbourne, says trade publications are expected to be “mouthpieces for their industries”. But funding third-party campaigns “creates a conflict of interest that wouldn’t exist. It’s not ideal.”

‘I’ve never encountered anything like this’: vaccine misinformation puts pressure on GPs

The ‘new’ Medicare. Are planned adjustments something to be scared of? A GP offers his view

The use of front pages and editorials for crusades – surely those “reader’s interests” have to correspond with the owners first?

Is this proposed measure aimed at the use of self-education expenses to fund attendance at seminars held in overseas holiday resorts? The seminars with the carefully constructed timetables which ensure that the lectures don’t conflict with golf rounds or pre-dinner drinks?

Having read this magazine I just hope that it is not tax deductible. An echo chamber of whining.